The richest pours: The best in all-American drinks

Belly up to the best all-American whiskeys, flavoured gins, aged tequilas and more 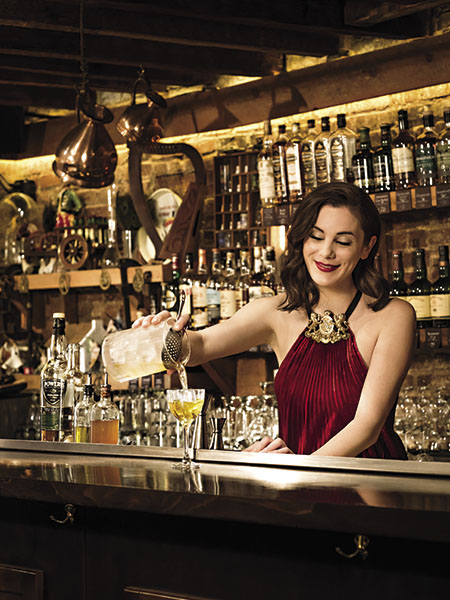 What’s the tale behind New York’s Dead Rabbit Grocery and Grog? Winner of the 2016 Drinks International award for World’s Best Bar, the downtown drink den was founded by Belfast natives Sean Muldoon and Jack McGarry, who wanted to create a bar that was a mix of the cocktail lounge they had worked in and the pub they had drunk in. “So we searched for a point in New York history where cocktails and Irish culture met,” the 45-year-old Muldoon recalls, “and came up with a story that brought them together”. 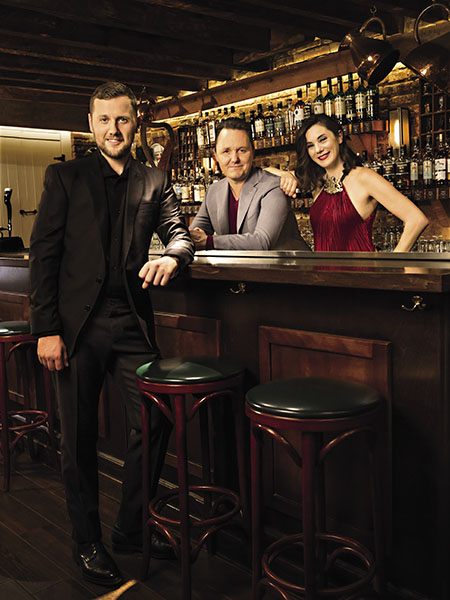 The result is a cozy three-storey bar in the Financial District inspired by John Morrissey, the leader of the Dead Rabbits, an Irish-American gang from the 1850s. Structured like a classic American tavern and decorated like a traditional Irish pub, Dead Rabbit features a taproom, a sit-down parlour and the Occasional Room for events, all teeming with old photographs, sports memorabilia and even some Civil War mementos. “At Dead Rabbit it’s about challenging the status quo of what an Irish bar can and cannot be and bringing it into the 21st century,” the 27-year-old McGarry says. The bar—home to the largest Irish whiskey collection in America—creates a new cocktail menu, crafted by beverage director Jillian Vose, every six months. (Its first recipe collection, The Dead Rabbit Drinks Manual, was awarded the Best Bartending & Cocktail Book at Tales of the Cocktail 2016.)

The team’s second New York location, BlackTail, opened this past summer. An exploration of how Americans influenced the Cuban bartending scene during Prohibition, it channels the spirit of Ernest Hemingway during his time in Havana and features the highball as its hero. “We opened it to show ourselves we could do something different,” McGarry says. As for what’s next, “we’re going straight back to doing what we do best—it’ll definitely be an Irish-inspired bar”.

All cocktail recipes by Jillian Vose of the Dead Rabbit Grocery and Grog.

The All-Americans
If you hold this truth to be self-evident—that not all whiskeys are created equal—then start drinking like the Americans. After all, American oak barrels are the key to Scotch and Japanese whisky as well as Irish whiskey. And while Kentucky may get all the old glory for its bourbon—and deservedly so—batches from other states (including Colorado’s Stranahan’s, Utah’s High West and Vermont’s WhistlePig) are also worth a salute.

Muddle blueberries in your shaker tin, add all liquid ingredients, shake with ice and fine strain into a coupe or cocktail glass. Grate fresh nutmeg over the top. 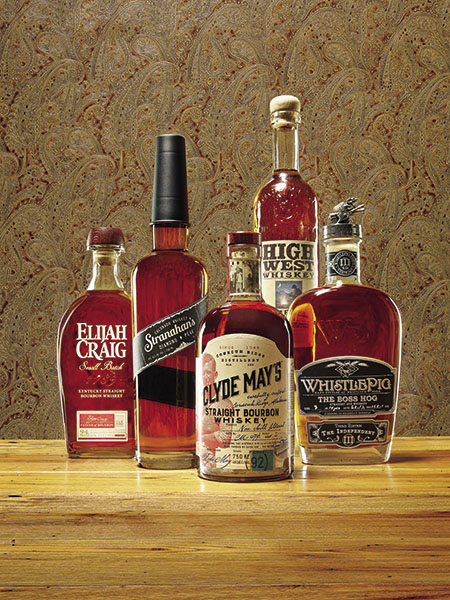 The Sipping Point
With all great spirits, age matters. And the wiser you get about tequila, the older it gets. Once you move past silver, gold and reposado (or rested), there is añejo, which is aged in oak barrels from one to three years. And as its name implies, extra-añejo is aged for more than three years and meant to be savoured—and it’s worth the wait.

Stir all ingredients in a pint glass or large glass mixing vessel with ice. Using a julep strainer, pour the drink over fresh ice into an Old-Fashioned glass. Express the oils of an orange twist and then discard the twist. 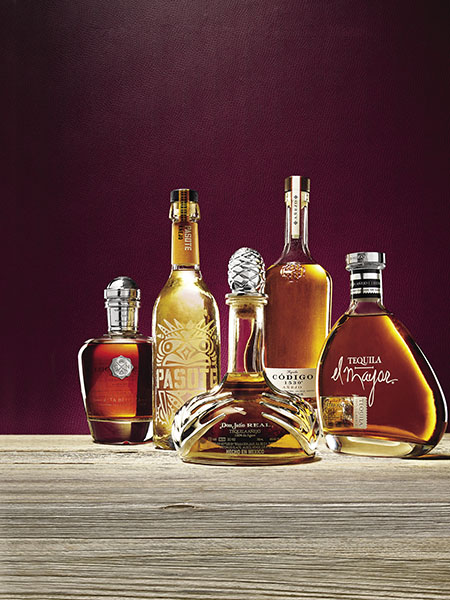 From left: Casa Noble Alta Belleza ($1,200), Pasote Añejo ($69), Don Julio Real ($350), Código 1530 Añejo ($120), Tequila El Mayor Extra Añejo ($120). Décor collection wall covering by Stark. Wood surface courtesy of The Hudson Company
Cognac to the Future
As a new generation discovers the world’s most famous brandy, Cognac has been enjoying a makeover. Granted, you can still appreciate bottles of rare eaux-de-vie that sell for thousands of dollars, but Cognac was once the people’s drink—and it’s the original foundation for some classic cocktails, including the mint julep. The new expressions of Cognac still evoke old-world grandeur, but they’re aimed at those who enjoy a good bourbon or whisky. Call it the spirit of modernity.

Mix all ingredients together in a cocktail shaker, fine strain into a Champagne flute, top with Champagne and serve. 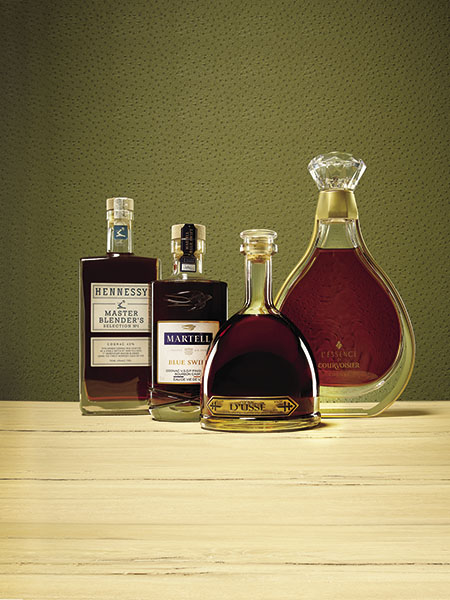 From left: Hennessy Master Blender’s Selection No. 1 ($80), Martell Blue Swift ($50), D’Ussé VSOP Cognac ($50), L’Essence de Courvoisier ($3,500). Sensational skins wall covering by Stark. Wood surface courtesy of The Hudson Company.
Drink Pink
James Bond may be best remembered for his vodka martinis, but in the novel Goldfinger he shoots back some pink Champagne. Don’t let the colour fool you: Great rosé Champagnes are not sweet, they’re brut (or dry). And because they contain more Pinot Noir and Pinot Meunier grapes, these bottles can hold their own with rich holiday meals. Plus, why not see 2017 through rosé-coloured glasses?

Build in a wine glass or highball glass over cracked ice. Give it a light stir. Express the oils of a grapefruit twist and then discard the twist. 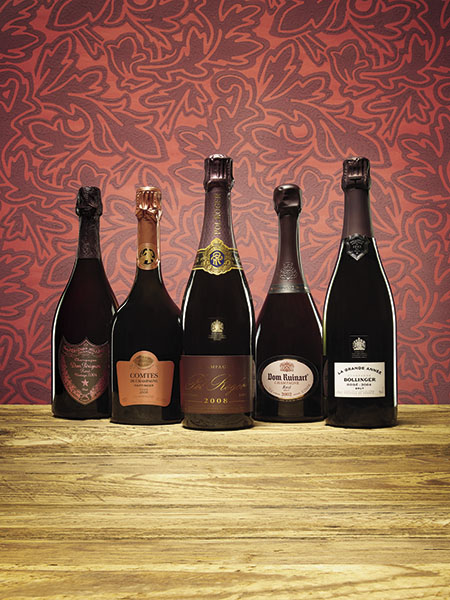 Ginning Up
Gin, unlike its clear cousin, vodka, is prized for the way it tastes. Which is why, in addition to the traditional juniper flavour, distillers often layer in a veritable hothouse of botanicals or a spritz of citrus. And for those who want to take their gin cocktails to the next level, there is barrel-aged gin, which rests in oak for months and sometimes years. The result is a gin that looks like rich white wine or even whiskey, and tastes like . . . well, try it.

Stir all ingredients in a pint glass and strain into a Nick & Nora glass. Express the oils of a lemon twist and then discard the twist. 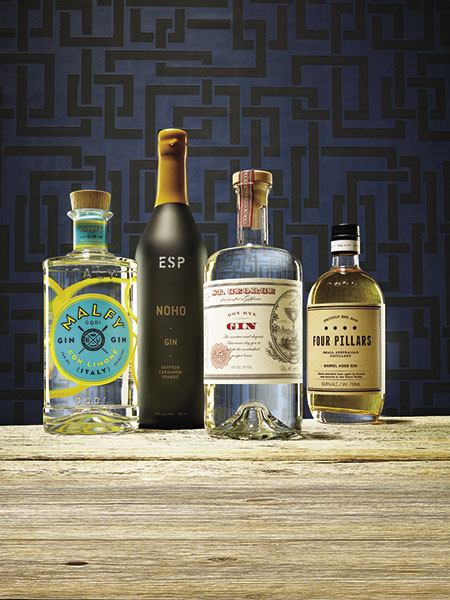