Velaa: A Marvel In The Maldives

Velaa Private Island was once an uninhabited dot in the most luxurious archipelago on earth. Now it's a dream destination for would-be Robinson Crusoes seeking solitude and sand. Or snow 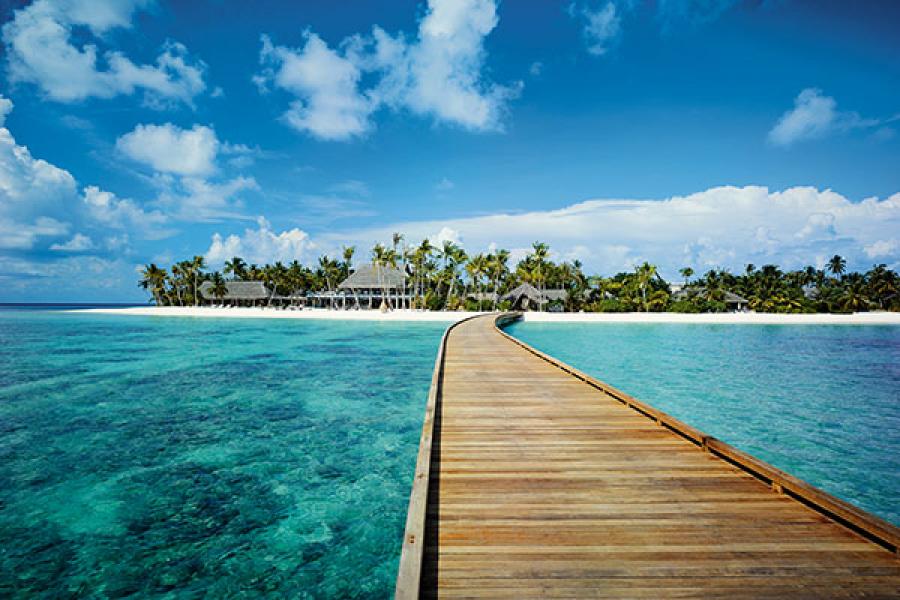 Long distance: With wood panelling from Borneo and paving stones from Jordan, everything on Velaa Private Island was imported—even the palm trees

Does it really snow in the maldives? not exactly. But if you know where to look, there is a decent chance you can find yourself sitting in a few inches of accumulation, brushing off some frosted flakes. It is 10 am on Velaa Private Island and the temperature is already climbing to 100. The cloudless sky and cerulean sea suggest that this will be just another day in tropical paradise, but there is an unmarked door at the resort’s spa, built above the water at the end of a jetty. “Get ready for my favourite feature on the island,” says Petr Kolář, the frenetic, 6-foot-4 Czech architect who designed Velaa—not long before he pushes me inside. “It’s the only snow room in the Maldives,” Kolář laughs after letting me out. The chill is exhilarating, but the effect is surreal. And it truly is odd to see one of the maintenance crew later shovelling the leftovers into the Indian Ocean, some 350 miles south of the equator.

Opened last December, this 43-villa Maldivian resort is the latest ultra-luxurious property to debut in the world’s most exotic archipel- ago. (Shortly before Velaa, LVMH opened Cheval Blanc Randheli in the same atoll, and later this spring, COMO will introduce Maalifushi in the Thaa atoll.) Velaa, which is the size of about 25 soccer  fields, was built from scratch for $200 million and is designed to attract the world’s most discerning travellers. 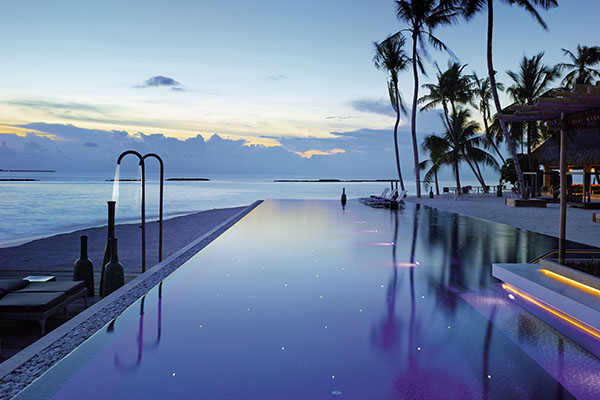 Still Waters: “You won’t find golden faucets here,” says architect Petr Kolár (right) of Velaa’s overall aesthetic, from the villas to the spa to the restaurants. “We stick to our motto: Polite luxury”

Situated in the Noonu atoll, a 45-minute seaplane flight north of capital Malé, Velaa is the passion project of Czech financier Jiří Šmejc and wife Radka. Šmejc is friends with the Czech Republic’s wealthiest man, billionaire Petr Kellner, and the two co-own Home Credit, a leading provider of quick retail loans in Russia. The company—it is spreading to China, Vietnam and seven other countries—was powered by capital that Šmejc and Kellner made from selling their country’s biggest television channel (now controlled by Time Warner) to Ronald Lauder in 2004.

Five years ago, the 43-year-old Šmejc had a vision of owning a private island. A regular in the Maldives since the early 2000s, he shared his dream for what eventually became Velaa, over a bottle of wine with Kolář. “Since then, he claims it was the most expensive bottle of his life,” Kolář jokes. 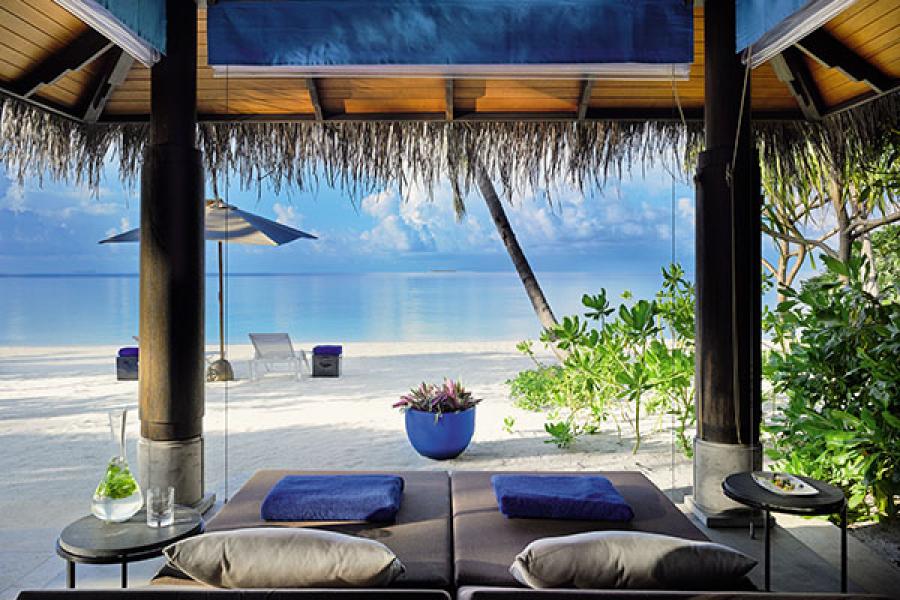 The two men eventually turned that vision into what they hope to be the most luxurious and exclusive resort in the Maldives. And even though there are more than 100 destinations to choose from in the country, they make a compelling case. When Šmejc purchased the 50-year lease on Velaa from the Maldivian government in 2010, there was nothing but thick bush and papaya fields. All the construction material and equipment had to be brought from overseas—wood panelling from Borneo, stone pavement from the Jordanian desert (on which you can walk barefoot even if the sun is shining on it), flowerpots from Indonesia, patio chairs from Italy. Even the palm trees had to be transported from neighbouring islands.

Today, in addition to the main villas (many of which are built over water), there are five four-bedroom residences, each with a private infinity pool, gym and spa room. There is the exclusive Romantic Pool Residence, which is accessible only by boat and comes with its own outdoor dining gazebo. 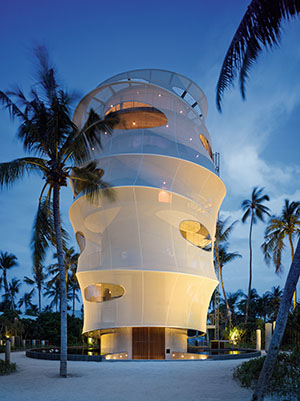 “You won’t find golden faucets here. We stick to our motto: Polite luxury,” says Kolář, who had his own Robinson Crusoe concept when designing Velaa. “I always had this idea that our guests would find themselves stranded on a deserted island, and by coincidence, there is this unique resort.”  Naturally, this nouveau Defoe comes complete with its own Man Friday—or as he is now known, a butler.

“This is not about business. This is about a dream come true,” Šmejc insists. A night at Velaa ranges from $1,500 for a one- bedroom Beach Pool Villa in the low season to $30,000 for a four-bedroom residence during the holiday season.

A tall drink: Tavaru Tower houses Velaa’s enormous wine and champagne cellar, and features a teppanyaki restaurant at the top with views of the island

There is much to do on the turtle-shaped island (‘Velaa’ means turtle in the local language). There is snorkelling and diving at the coral reef where dolphins may be inclined to stop by. You can swim with giant mantas and baby sharks—who, in theory, eat only plankton. If you prefer not to keep dangerous company, watching an evening stingray feeding from the main jetty is still quite the spectacle. There is plenty of waterskiing, kayaking, wakeboarding and kite surfing, as well as a seabob and a mini submarine for those who want to get in touch with their inner James Bond. 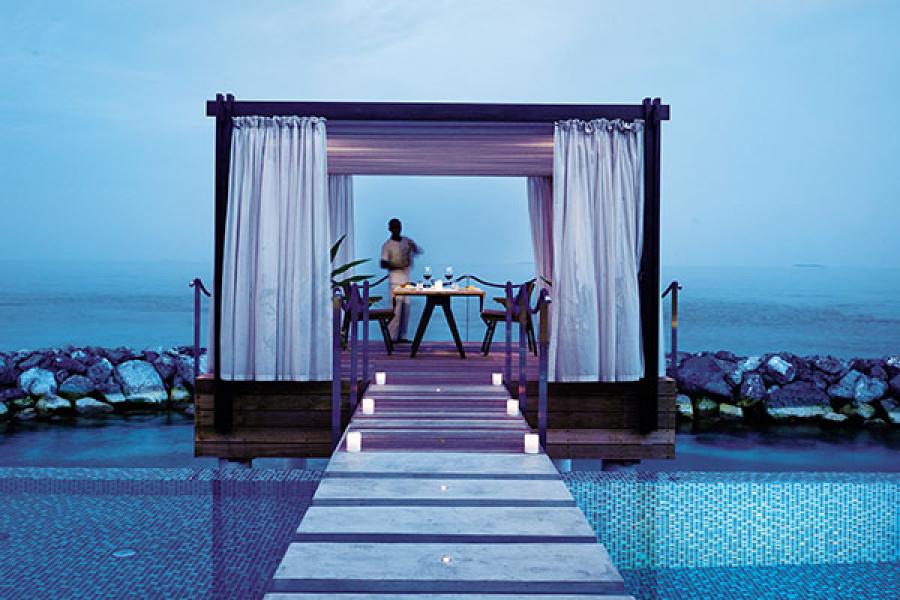 Back on land, Velaa has a yoga pavilion inside a two-storey wooden watchtower, a kids’ club and beach volleyball and squash courts, right next to the only shaded tennis court in the Maldives. Golfers can practice at the Troon short-game golf academy, designed by two-time Masters Champion José María Olazábal. Or they can hone their form indoors at the professional swing studio.

“I don’t have one favourite activity,” Šmejc says. “I spent time at Velaa around New Year’s and I tried different activities every day. I played beach volleyball or tennis every day, and practiced yoga every other day. And did water sports with the kids.”

Adds Kolář, “You can be here for two weeks and not do the same thing twice.”  Especially when it  comes to relaxation. In addition  to  the  geography-defying snow room, Velaa’s My Blend Spa by Clarins is the only one in Asia featuring an avant-garde cloud-shaped pod that slowly sways and cradles a guest into deep relaxation.

The waterside Aragu restaurant, one of three on the island, aims to make Velaa a dining destination as well. The kitchen is overseen by executive chef Adeline Grattard, a veteran of two Michelin-starred  restaurants—Hong Kong’s  Bo Innovation  and L’Astrance in Paris—who earned a star of her own at 32 for Yam’Tcha in Paris. 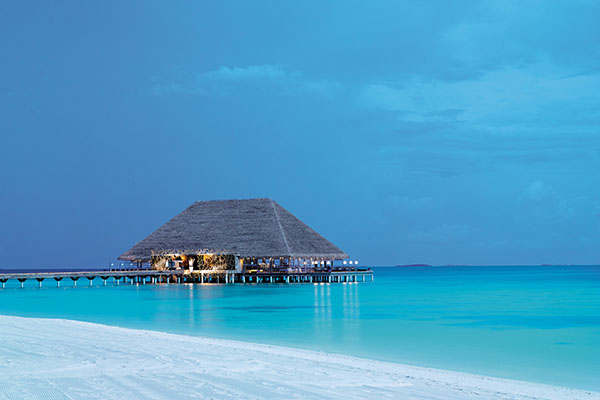 Stellar dining: Aragu, the main restaurant, is overseen by Michelin-starred chef Adaline Grattard. Below, each ocean villa comes with a private plunge pool and view of sunrise or sunset


The resort also boasts the largest wine and champagne collection in the Maldives, all housed in the otherworldly 37-foot Tavaru tower with a teppanyaki grill at the top. “It gives you another perspective on the island,” says Kolář, sitting behind the cooking range, across from Grattard’s executive sous-chef, Gaushan De Silva. Before coming to Velaa, the Sri Lanka-born De Silva had been touring top restaurants around the world to prepare for the challenge Šmejc had issued: Earning a Michelin star for Aragu.

Tavaru, the ivory structure with panoramic views of the island, also features private dining inside the wine cellar. It sits only a few steps away from the gate to Šmejc’s own four-bedroom villa, which has a conference room for business and a living room ideally positioned for sunset.

But of all the luxuries that Velaa has to offer, Šmejc understands that privacy is perhaps the greatest—which is why the resort is designed for a maximum of 142 guests at one time.

“Our goal was to bring new meaning to a private escape, where the essence of Maldivian culture, lifestyle and landscape meets limitless opportunities,” he says. “A place where no request is too much and each guest will ultimately feel this is their own private paradise.”

(This story appears in the July-Aug 2014 issue of ForbesLife India. You can buy our tablet version from Magzter.com. To visit our Archives, click here.)

Tweets by @forbes_india
Nir Halevy: How Do You Motivate Your Employees?
For career growth, take challenging assignments