Virat Kohli and the Power of One8

Virat Kohli has built a Rs 100 crore-plus celebrity brand in quick time. Can he emulate his new-found success as India's most successful Test cricket captain in entrepreneurship? 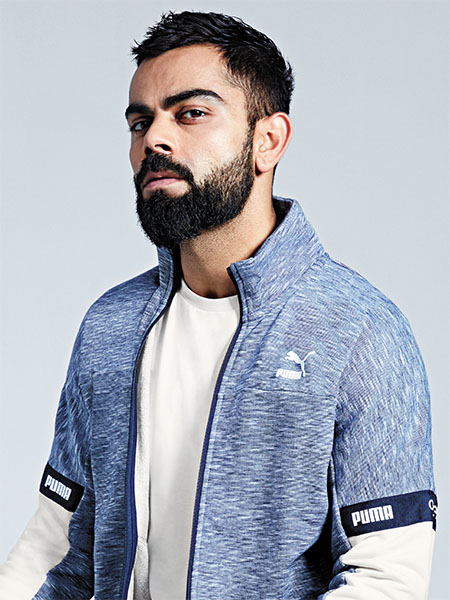 “Being aggressive is not a problem at all. If it drives you, it’s a great thing.” Virat Kohli, India captain
Image: Marc Lecureuil

Early August, 2018. It’s the second day of the first Test match between India and England at Edgbaston. The conditions are overcast, with the swinging cherry making the Indian batsmen sitting ducks for the slip cordon. Two wickets fall cheaply in a little over a dozen overs. The prospects for India in the inaugural Test of the keenly followed five-match series appear bleak.

Enter skipper Virat Kohli, who is welcomed to the crease by hooting home spectators firmly behind their team. Standing far down the 22 yards is a belligerent and purposeful James Anderson, who had dismissed Kohli four times during India’s last tour of England four years ago. Ten innings with scores of 1, 8, 25, 0, 39, 28, 0, 7, 6 and 20, and an average of just 13.50 in 2014 are fresh in most minds at Edgbaston. Kohli finds himself hemmed in by a bunch of chatty close-in fielders. The setting looks ominous. By the end of day’s play, however, it was anything but that. Kohli played a gritty captain’s knock of 149, setting the tone for the series; he finished the five Tests with 593 runs at an impressive average of 59.3, emerging the highest run scorer in the series.

Since then, there’s been no stopping Kohli, who last fortnight became India’s most successful Test skipper after the 2-0 sweep against the West Indies in the Caribbean. His winning record of 58 percent takes him past accomplished leaders MS Dhoni (45 percent) and Sourav Ganguly (43 percent). For Kohli, going where few have ventured before is a way of life—off the field, too. Some 10 months before the England series began, Kohli was readying to make a major splash in business. Brands weren’t alien to him, after establishing youth fashion label Wrogn with fashion startup Universal Sportsbiz in 2014. He was also endorsing a slew of big-ticket brands from Audi and MRF to Uber and Hero. Now, though, was the time to push the entrepreneurial envelope.

“Around 2016 is when I felt that I am entering a phase of my career that is the right time to establish my own brand,” Kohli told Forbes India in an interview at the Four Seasons Hotel in Mumbai in end-July, a day before leaving for the tour of West Indies.

The idea of launching one’s own brand in collaboration with a sportswear maker may appear fairly straightforward; after all basketball legend Michael Jordan did just that with Nike in 1984 with the launch of Air Jordan. Still, there was no precedent in India.

What is more, Indian sportspersons—cricketers, in the main—tend to dabble in business towards the twilight of their career.   “Around 2016, I would easily have had 10-12 years of cricket left in me. So I thought that’s a great time to grow the brand. I didn’t want to do it at the fag end of my career and not have the time and opportunity to grow it further,” says Kohli. Listen

When Kohli joined hands with Puma for One8, with footwear, backpacks, caps, training bags and, more recently, kidswear, there were enough sceptics. Although Indian sports is littered with celebrity brands, the concept of co-creating a label in partnership with a sportswear firm was virtually alien. Among the icons, there’s Sachin Tendulkar who has a joint venture with clothing brand Arvind for the True Blue label. Dhoni has lifestyle brand Seven, which has been created by a firm promoted by Rhiti Sports, a company backed by the former captain himself. For most other sports celebrities, individual endorsements is the name of the game, off-field.

It’s early days yet, but almost two years after its launch, the cash registers are ringing. In June, One8 crossed ₹130 crore in revenue, and the projection is that it will touch ₹185 crore by the fiscal year ended June 2020. Ahead of Kohli is actor Hrithik Roshan’s HRX, launched with Exceed Entertainment in 2013, which is estimated be worth over ₹300 crore. And there’s Mandhana Retail Ventures, which sells superstar Salman Khan’s Being Human label, which reportedly closed fiscal 2019 at ₹219 crore.

Kohli has these labels in his sights. The frenetic pace of growth he has set isn’t alien to a cricketer with a rash of ‘fastests’ and ‘firsts’ under his belt. He is the quickest to reach 10,000 one-day international (ODI) runs, in 205 innings; the fastest to score 1,000 ODI runs in a calendar year, in just 11 matches in 2018; and the first batsman to score 20,000 international runs in a decade. 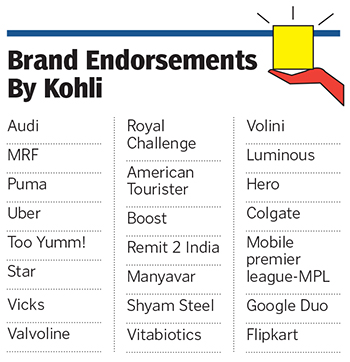 There’s no letting up, not on the pitch or off it, as One8 expands into a slew of categories.

While an energy drink and water have been launched in a tie-up with O’cean Beverages, the One8 range of fragrances has been rolled out with Scentials. Then there is One8 innerwear with Artimas Fashions, an arm of listed hosiery firm Lux Industries. The latest to join the One8 family is One8 Kidswear for those aged between four and 14 years, and One8 Commune, a restaurant in partnership with friend Vartik Tihara and restaurateur Ankit Tayal.

The ambition is to grow the business five or six times over the next five years. “The vision is to keep working hard and doing things that are not happening out there,” contends Kohli.

What Tendulkar and Dhoni tried to ignite towards the end of their careers, with True Blue and Seven, respectively, Kohli has started a forest fire at his zenith, reckons Abhik Choudhury, founder of Salt and Paper, a brand consultancy firm. That he has a distinct brand personality which resonates with the stylish, rebellious Indian youth provides a unique edge, he adds.

Globally tennis champion Roger Federer and soccer legend Cristiano Ronaldo are two active sportspersons who’ve met with tremendous success with their fashion brands RF and CR7. Choudhury reckons that Kohli has the potential to increase his brand value post-retirement, a la David Beckham —never mind that he is nowhere close to hanging up his boots. Kohli’s stupendous social media reach will help for sure; he is the No 1 cricketer on social media and ninth on the Instagram Rich List for sportspersons with an estimated earnings of $196,000 per Instagram post.

When it comes to parallels between cricket and entrepreneurship, Kohli sees many. Starting with risk-taking and going by the gut. Then, there’s the matter of starting steadily, gauging the nature of the pitch and getting into the groove. “If you go bang on and come up with everything at the beginning, it doesn’t work,” he explains, in the context of starting One8 with a limited range of apparel and shoes.

And there are the partnerships, perhaps the only difference being that in business, Kohli can decide who to partner with, and who not to. Whether it’s building a long innings or pacing the business growth, partners matter a lot. Had Puma, Kohli lets on, not joined hands with him, maybe he would not have got the confidence to grow the brand. “Collaboration with Puma was the key.”

Puma compliments its illustrious partner who is known for spearheading mind-boggling run chases. “Virat is phenomenal. While others chase the possible, he chases the impossible and gets it done,” points out Abhishek Ganguly, managing director of Puma India.

The German sportswear brand stunned the endorsement world by roping in Kohli reportedly for ₹100 crore for an eight-year deal in February 2017. The seeds of One8, reveals Ganguly, were sown in the deal. “When we signed Virat, no one knew we had plans to launch One8—the number on his jersey,” he grins.

Ganguly decodes how the relationship works. While Kohli owns One8, Puma is the exclusive licence partner taking care of product development, manufacturing, distribution network and marketing. Kohli brings to the table his inputs in terms of designs, styles and deep involvement. “It’s a symbiotic partnership,” says Ganguly, adding that over 20 percent of space in all Puma stores is dedicated exclusively to One8. “We are open to the idea, but it’s a bit early,” he says on the possibility of opening standalone One8 stores.

Can the fastest become the biggest in India? Ganguly reckons Kohli has the best chance to make it happen. “His peak is yet to come.” One8, he contends, will outlive Kohli’s cricketing career. “By the time he retires, this will be a ₹4,000-crore brand.”

Podcast: In conversation with Virat Kohli, the sharp businessman

Given that celebrities have a limited shelf life, and sportspersons an even shorter one, investing behind one’s own brand at a relatively early stage is a smart move, according to brand consultants. “This intense and aggressive focus on anything he does gives Kohli an edge over others,” says N Chandramouli, CEO of TRA Research, a brand insights company. It has an enormous headroom to grow, considering the number of different segments it is in, he adds.

Ironically, it is the immense growth potential of One8 that might turn out to be Kohli’s biggest challenge. Reason: The dashing cricketer has to be judicious in stretching the brand. Take, for instance, the latest move to launch a One8 branded restaurant. “He can’t mean everything to everybody. A sub-brand rather than One8 would have done justice to a restaurant,” reckons Abraham Koshy, professor of marketing at IIM-Ahmedabad. Kohli, for his part, thrives in the unknown. As he explains in an exclusive interview, “I would rather take a risk than be safe.”


Show More
Get the latest stories, videos, and podcasts from Forbes India directly in your inbox every Saturday
Thank you for your comment, we value your opinion and the time you took to write to us!
Comments 2

Tweets by @forbesindia
Can New York's High Line be replicated in India?
I have always taken risks: Virat Kohli