When Ted Turner was a boy in Savannah, Georgia, he loved to hunt and fish. After he was turned in to the local police for shooting a squirrel on a neighbour’s property with a BB gun and fined by a judge, he had an epiphany. “I decided I was going to make a lot of money so I could buy my own damn land,” the 77-year-old billionaire said in June at his Vermejo Park Ranch in northern New Mexico, one of 17 ranch properties he now owns. “And so I did.”

Today Turner owns about 2 million acres across the United States, making him the second-largest private landowner in the country. (Billionaire John Malone has about 200,000 acres more—and has followed Turner’s lead in land conservation and species preservation.) And while it’s unlikely that Turner would admit he has a favourite property, his flagship is Vermejo Park Ranch, some 585,000 acres straddling the New Mexico-­Colorado border, which he purchased in 1996. ­Turner made a home on this range—the mansion known as Casa Grande, which has just undergone a multimillion-dollar renovation and is now converted to a luxury guest estate.

“We’ve been told that it’s the largest piece of contiguous private land in the United States under one ownership,” he says. With Vermejo and his properties in southern New Mexico, the Armendaris and Ladder ranches, he owns about 1.1 million acres of the state. That’s slightly bigger than Rhode Island, which has a population greater than 1 million. 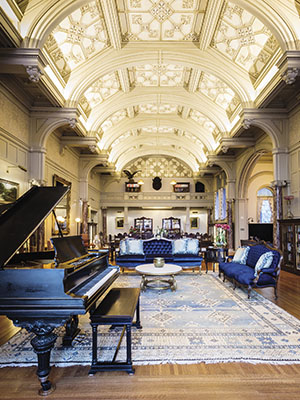 Turner started buying his land in the West for hunting and fishing, but he’s always seen animals as more than simply targets. His Turner Endangered Species Fund protects a variety of creatures, and his Tur­ner Foundation aims to prevent environmental damage. He plans to place much of his land under conservation easement, to stave off future development, and has a particular fascination with bison, which were nearly extinct before he set about bringing them back. Turner started his bison herd some 35 years ago with three and now maintains about 52,000—they reproduce quickly and are a sustainable food source, he notes excitedly.

“I grew up in Georgia, so I never saw a mountain until I was an adult man,” Tur­ner says. Because he loves fly-fishing, he started buying remote land in Montana, widely regarded as prime wild-trout territory. But soon he wanted to expand. “I enjoyed my experience in Montana so much after all my life in the Southeast that I thought, well, I’d seen New Mexico in Western movies, so why don’t I see what the Southwest is like? It’s totally different. And when I got out here, I loved it, too. So here I am, with a million acres of the state.” He adds that his ranches have an extraordinary diversity of flora and fauna, and notes that people on the coasts don’t touch down here too frequently.

Turner is particularly proud of and sentimental about Casa Grande. It was built by wealthy industrialist William H Bartlett at the turn of the 20th century (its architect was a mentor of Frank Lloyd Wright) and became something of a clubhouse for silent-film stars. After Turner purchased the ranch, the 25,000-square-foot house became his family’s refuge. And after deciding to open it to paying guests—“I have too many properties to enjoy them all myself,” he says—he committed to a four-year, $4.5 million renovation.

The result is stunning, with the Italianate mosaic floors revealed, a 1905 Steinway refurbished and eight bedrooms updated to 21st-century standards. (Rates start at $850 a night, double occupancy, and include meals and non-guided activities.) It’s a luxurious upgrade over the simpler accommodations in the aptly named Casa Minor, right next to the main lodge (home to the dining room and bar) and in the newer, pretty Costilla Lodge, 25 miles away in the high country. Asked whether he hopes Casa Grande will pay for his investment, Turner notes that he already owns the land outright and it brings in profits from hunting, fishing and bison meat, so “if I do pick up any income, it will be found income. I don’t need to make a lot of money. I’d like to make a little.”

The new Casa Grande is also in line with Turner’s plan to open his ranches to a broader swathe of nature lovers—the luxury-seeking kind who would never stay at a typical hunting lodge. The aim is to recreate the national park experience on private, virtually uninhabited land. At Vermejo, unlike at, say, Yellowstone, you won’t find 30 cars stopped with 100 people photographing one bison, he notes. You’ll find just one car by a herd: Yours. 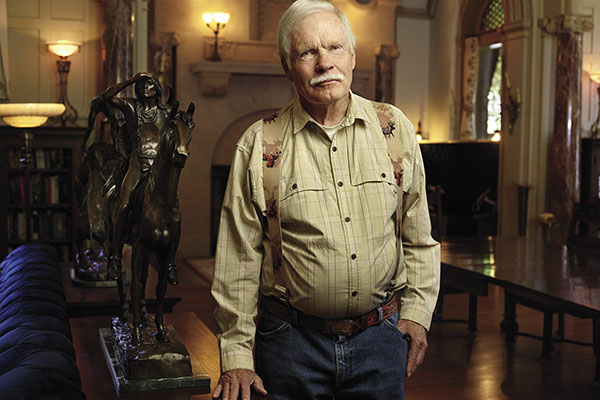 Last year he started Ted Turner ­Expeditions (TTX) at his three New Mexico ranches, with a ­mission to prove that the economically successful and the environmentally sustainable are not mutually exclusive. His TTX team added adventure and conservation-minded activities such as hiking, horseback riding and wildlife spotting with naturalist guides.

Hunting and fishing remain the big draws, but the staff at Vermejo are enthusiastic and knowledgeable whether toting a fishing rod or a camera.

If all goes well in New Mexico (and at two other Turner properties, including an island off the coast of South Carolina), TTX will run operations at more of Turner’s ranches. “Eco­tourism is on the rise all over the world,” he says. “Everybody is interested in the planet. It’s the most interesting thing we experience in our lifetime. We don’t know if there’s life on any other planet. If there is, we’re not going to see it in my lifetime. This is all we’ve got. We might as well enjoy it.”

Tweets by @forbesindia
I would like to have 1,000 rooms by 2025: Shruti Shibulal
Six Hidden Gems and their confidence game