The sound of music festivals 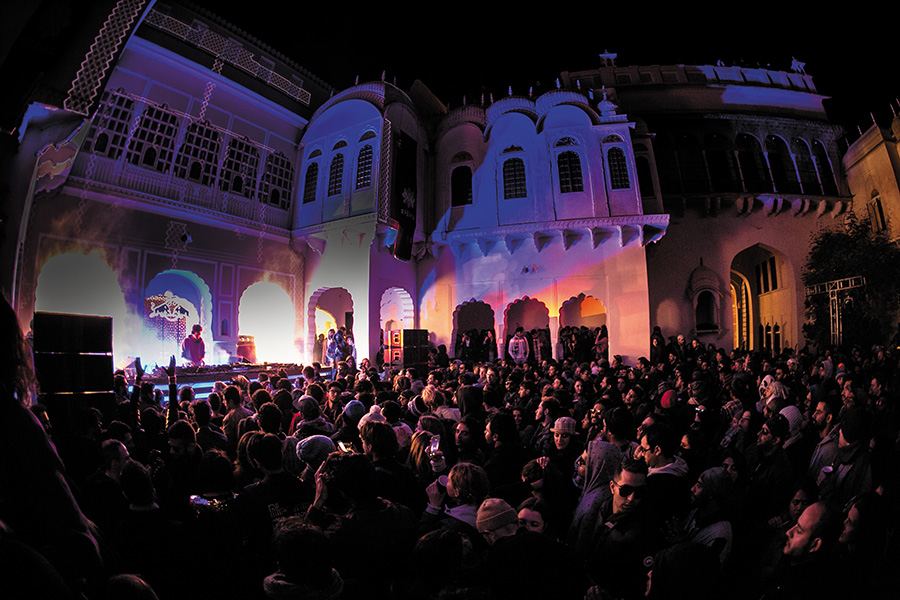 Ben UFO at Magnetic Fields. Season passes for the festival, held in Rajasthan, are priced at ₹12,000 for a three-day event
Image: Abhishek Shukla

In the India fresh from economic liberalisation, music had found a new voice. Thanks to satellite television, which beamed channels such as Channel V and MTV into the living rooms of millions, musicians and singers suddenly found an audience that they had never had before. Free from the shackles of film industries, they experimented in languages and genres that had, till then, remained confined to some regional pockets.

But despite the burgeoning indie pop scene in the 1990s, what remained elusive were live music festivals where these artistes and audiences could come together for an entirely different experience. Live performances remained limited to college festivals, and a handful of venues, such as nightclubs, in the metros.

“When we started off, there was no infrastructure to support and sustain rock music or live bands. It was very hard to get good instruments and even if you did, they were very expensive. But things are better now, more professional with better technicians and sound engineers,” says Uday Benegal, the lead singer of Indus Creed, which was formed as Rock Machine in 1984. 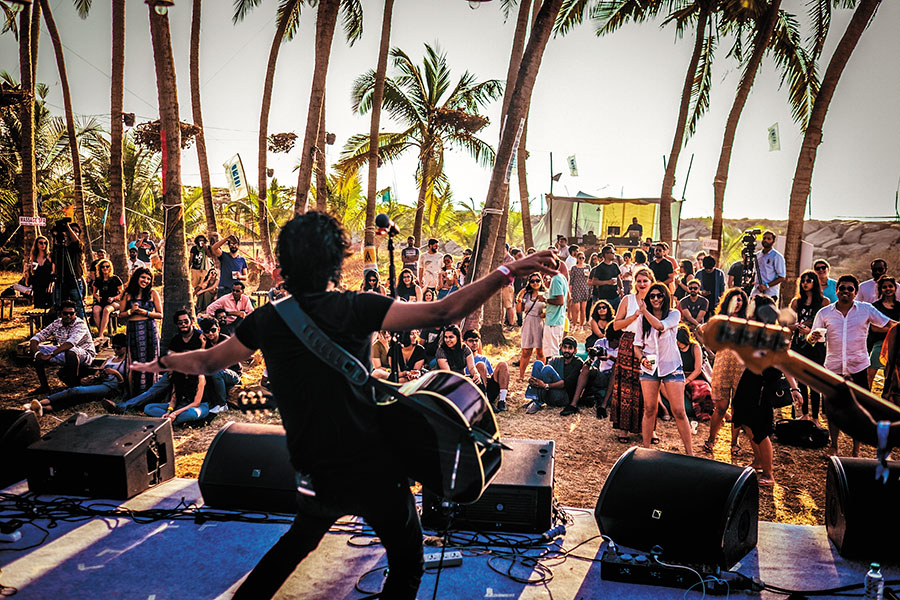 The past few years, however, have seen a rapid evolution of the music scene in the country, with live music festivals gaining immense popularity. With events such as Magnetic Fields (Rajasthan), NH7 Weekender (at places including Pune, Meghalaya, Lucknow, Kochi), VH1 Supersonic (Pune), Nariyal Paani (Alibaug), Ziro Festival of Music (Arunachal Pradesh) and Echoes of Earth (Karnataka), the festival circuit now not only covers major cities, but also some far-flung exotic locales. The availability of infrastructural and logistical support, and hospitality and travel options, has made it possible to bring together a variety of elements—organisers, producers, financers, technicians, transporters, support staff and others—that is required to pull off events that see dozens of performing bands and thousands of visitors in attendance.

Not only have these festivals grown to include different genres, they have become platforms for Indian and foreign artistes to find new audiences who are willing to spend money, time and effort to listen to them. While season passes cost between ₹2,500 and ₹12,000, individual festival tickets cost between ₹2,500 and ₹5,000, with Magnetic Fields priced at ₹12,000 for a three-day event. Large-format festivals, such as Bacardi NH7 Weekender, are attended by 25,000 to 45,000 people over three days, while about 4,000 people attend Magnetic Fields, and smaller, boutique festivals like Nariyal Paani attract 800 to 1,000 attendees.

“The audience is hungry to absorb different genres of music and are open to more alternative sounds,” says Supreet Kaur (28), festival director, Bacardi NH7 Weekender. “Audiences are being spoiled for choice today, with more than 70 to 80 international acts touring in India every year; 10 years ago that number was just three to four.” Weekender was started in 2010 as a platform for indie artistes, and since its first event at Pune, it has grown to nine venues, with audience size increasing from 3,500 to 45,000.
Having performed at festivals all over the country, Ashish Jose, a DJ who goes by the stage name of Tarqeeb, says, “Festival organisers have the ability to groom their audiences and elevate their taste in music by exposing them to music they would otherwise not hear.” 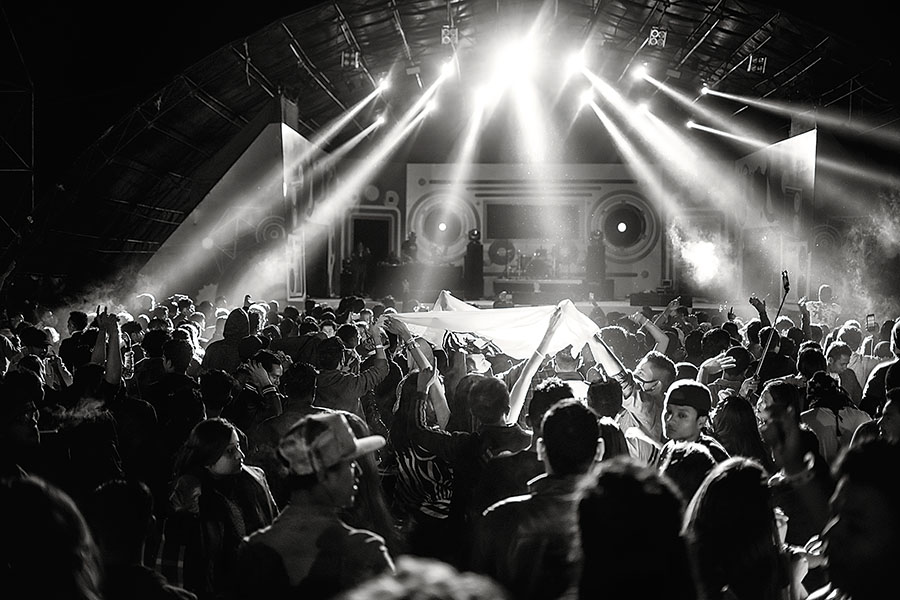 NH7 Weekender is held at several locations including in Meghalaya and Pune
Image: Madhurjya Saikia

When it comes to deciding on a venue for a music festival, there are multiple factors that go into it. “While choosing a city for a music festival, one looks at many aspects such as accessibility, active audience available within the city, infrastructure facilities and lots of stay options around as people would be travelling for more than one day,” explains Sameet Sharma, festival director, VH1 Supersonic.

With about 30 to 35 festivals now being held within a short season that lasts from October to February—the rest of the year is too hot or too wet to have outdoor performances—festivals are vying with each other to be unique in their own way. With a limited number of large outdoor venues with capacities to hold several thousand people, organisers are finding spaces that make festivals more immersive, not just for the audience but also for artistes.
For instance, Munbir Chawla and Sarah Fatemi, founders of Magnetic Fields, wanted to offer more than a great artiste line-up. “For us a music festival is all about getting away from your routine and becoming a part of a community for three whole days,” says Chawla. “This is why we don’t sell day passes.” Magnetic Fields, which was launched in 2013, takes place at Alsisar Mahal, in Rajasthan’s Jhunjhunu district, where attendees can stay at rooms in Alsisar Mahal, tents, or their own camps. The festival has multiple performance stages at various locations through the palace, but only one is active at a time. 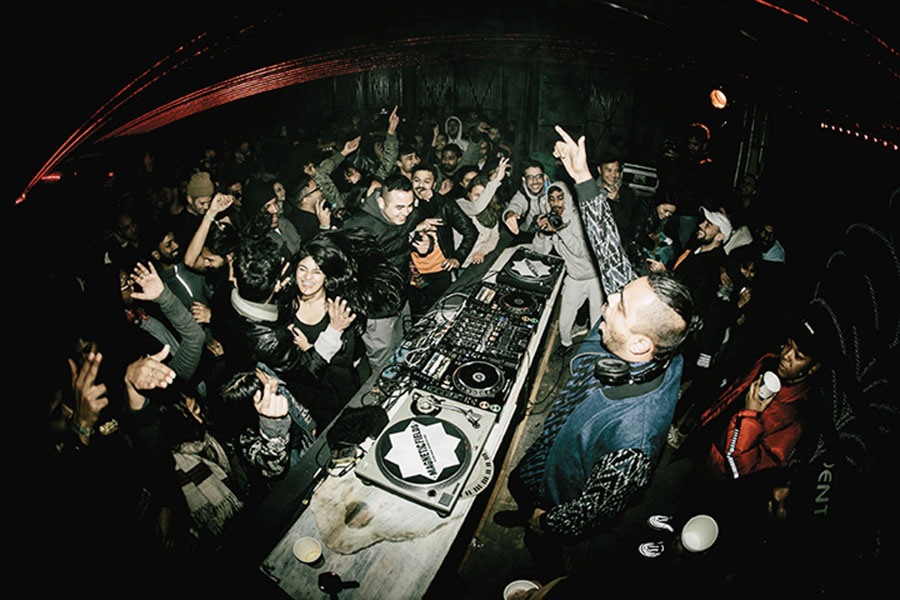 A smaller, boutique festival is Nariyal Paani, held at Alibaug—95 km from Mumbai—organised by Tanvi Gupta (35) and Siddhant Khanna (36). “We realised that Alibaug can be converted into a very culturally oriented space, with art, music and culinary experiences, all just a boat-ride away from Bombay,” says Gupta. In 2016, the duo organised the first episode of Nariyal Paani, which gets about 800 to 1,000 visitors over a span of two days.

Echoes of Earth, now in its third year, stands out because of its message. “We wanted to use the festival as a platform to stand for something more,” says Roshan Netalkar, festival director. “Living in Bengaluru, we are exposed to the rapid erosion of natural resources right in front of our eyes. It is the need of the hour to wake up and start creating a responsible ecosystem. This thought became the driving force behind the festival.”
However, offbeat locations also pose their own set of challenges. “While it’s great to have the backdrop of a beautiful haveli and expansive desert, getting the logistics in place can be tough,” says Chawla of Magnetic Fields. “We have to ensure all our security issues are addressed whilst also being respectful of the location and population of Alsisar.” For Gupta, Alibaug presents different issues. “It’s difficult to convince the locals about the difference in culture and loud music. Often, in case of a wedding, finding accommodation becomes a task in Alibaug. And while the sea looks beautiful, there have been times when the water has come in, and we have had to rewire the systems.”

But despite the challenges, each of these festivals provides a memorable experience, not only for the audience but also the artistes. Benegal, who has performed at Ziro Festival of Music in Arunachal Pradesh, says, “In terms of travel, it’s really difficult getting there. But the view from around there is beautiful. Playing there, in the middle of so much natural beauty, was outstanding. The organisers do a really good job of providing artistes with everything we need to perform.”

Music festivals are also no longer just about the music, with some of them including workshops, installation art, and food. At Magnetic Fields for instance, there are revitalising workshops for the body, soul and mind, and gathering around storytellers from various fields. At Nariyal Paani, there are activities such as star gazing, community painting, and treasure hunts. 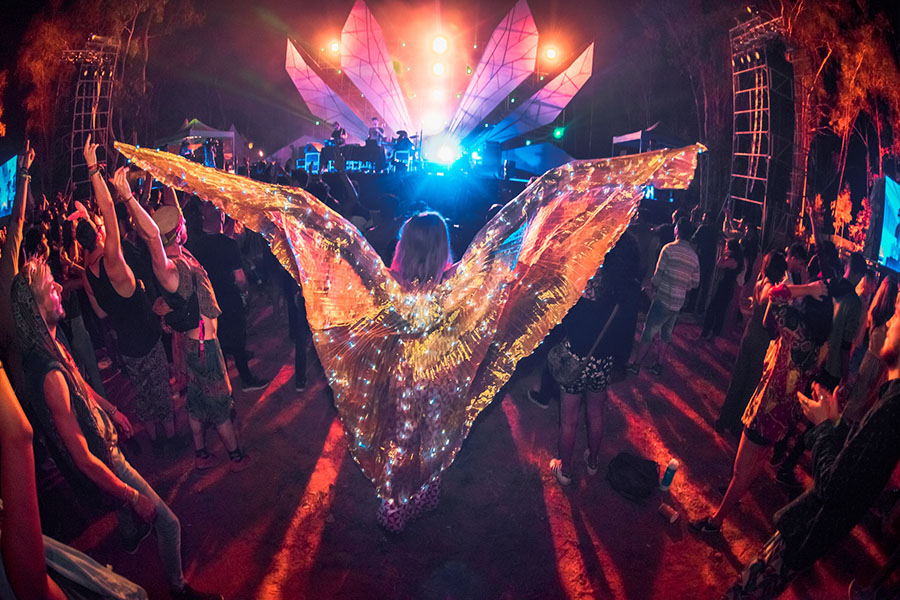 Echoes of Earth, held in Karnataka, is in its third year
Image: Rohit Sarcar

But despite the brownie points that music festivals in India are notching up, they have some way to go when compared to festivals abroad. Kaur of NH7, says, “A majority of the festivals in the world, particularly in Europe and North America are seasonal—the entire region hosts festivals on consecutive weekends, allowing them to share artistes. The festival season in India is primarily from October to February, which makes India a one-off location for most international artistes, thus making it a lot more difficult to book them.”

Chaitanya Bhalla, guitarist with the band Ska Vengers, finds it a lot easier to perform in India than travel to other countries: “Internationally, a band has to carry a lot of equipment, which is not the case in India. Especially in the UK, a lot of these festivals happen in the middle of forests, where carrying our gear can get tough.” He, however, adds that, “international organisers have years of a head start over us. Indian organisers are very good in terms of hospitality and production value.” Ska Vengers has performed at Glastonbury, Bestival, Secret Garden Party and Boomtown Fair in the UK, and Indian festivals such as Magnetic Fields, Nariyal Paani, VH1 Supersonic and Bacardi NH7 Weekender.

Aditya Ashok, a drummer, music producer and DJ, feels there is a clear difference between more mature festivals and those in India. “Foreign festivals are a little more streamlined, as they have been going on for much longer than Indian festivals. So they have ironed out most of the snags that are inevitable while organising such big events.” Having performed at festivals such as Glastonbury, Euroblast (Germany), Groezerock (Belgium), Sakifo (Reunion Island), and most of the Indian ones, he adds, “The most striking difference is the punctuality. International festivals and club shows almost always run on schedule down to the minute.”
Despite the challenges that music festivals in India must overcome as the industry grows, the enthusiasm of audiences and organisers alike seems to be undaunted. For music can be heard, and can also be experienced. The former is something India has done for long; the latter is what we are just waking up to.