The new show, unscripted and as yet unnamed, will follow Baskin and her husband, Howard, "as they work to expose, like never before, those who abuse and take advantage of various animals" 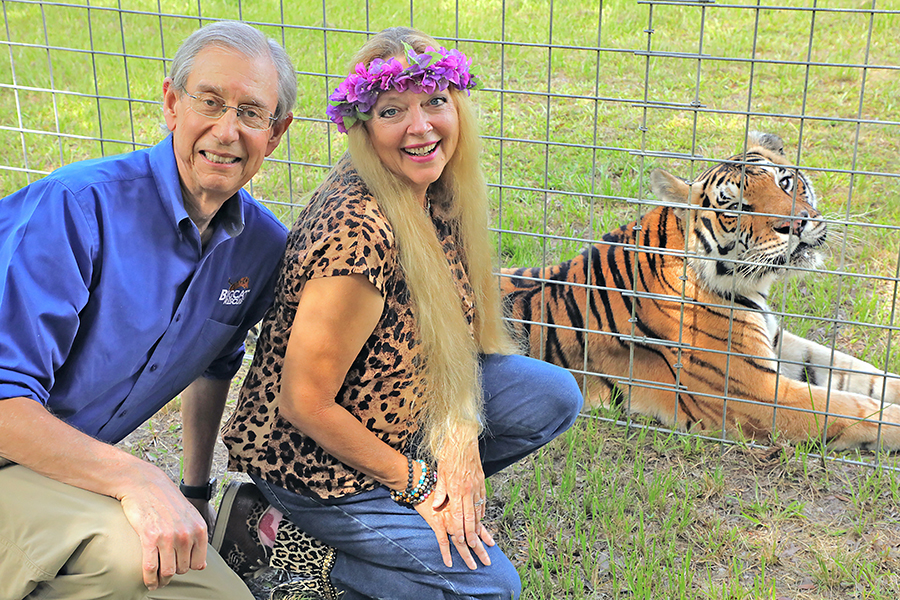 A photo provided by ThinkFactory Media shows Carole and Howard Baskin of Big Cat Rescue in Tampa, Fla. A new, unscripted series will follow the Baskins as “they work to expose” animal abuse, a production company said. (ThinkFactory Media via The New York Times) Carole Baskin, the animal rights activist who gained national attention while sparring with exotic tiger keepers on the popular Netflix documentary “Tiger King: Murder, Mayhem and Madness,” is getting her own show. The new show will star Baskin and her husband, Howard Baskin, of Big Cat Rescue in Tampa, Florida, according to a statement Thursday from ITV America’s Thinkfactory Media, the production company that is developing the show. The new show, unscripted and as yet unnamed, will follow the couple “as they work to expose, like never before, those who abuse and take advantage of various animals,” and spotlight history, lawsuits and animal rights violations, Thinkfactory Media said in a statement. “This is a chance for us to use our new platform to battle the everyday evils facing big cats and so many other animals,” the Baskins said in the statement. The show is in the development phase, and the production company will soon meet with networks and streaming services to pitch it, Thinkfactory Media said. The company has previously worked to bring other shows to networks, including, “Mama June: From Not to Hot,” “Gene Simmons Family Jewels” and “Dog and Beth: Fight of Their Lives.” Baskin and her husband gained attention in March, as much of the country was homebound during the coronavirus pandemic and millions of viewers were drawn to “Tiger King.” The documentary followed Baskin and Joseph Maldonado-Passage (known as Joe Exotic), the flamboyant owner of a lion and tiger zoo in Wynnewood, Oklahoma, through their long-lasting feud. In 2019, Maldonado-Passage was convicted of trying to have Baskin killed. In June, a federal court judge in Oklahoma ruled that Baskin’s organization, Big Cat Rescue Corp., could take over the site of Maldonado-Passage’s former zoo. Baskin has denied any role in the disappearance of Don Lewis, her former husband, who was mentioned several times in the show. Lewis disappeared in 1997, and the case was never officially closed. Baskin also drew attention this week when she made her debut on “Dancing With the Stars” on Monday, performing to “Eye of the Tiger.” She wore her signature flower crown and danced in a pink tiger print dress. (The dance even started with her partner, Pasha Pashkov, and tiger props in a cage.) During the show, the family of Lewis and their lawyer, John M. Phillips, ran a commercial seeking justice for Lewis and asking for tips. As of Thursday, it had more than 800,000 views on YouTube. Howard Baskin declined to comment about the commercial Thursday. Carole Baskin said Wednesday that it would be wonderful if the commercial could help solve Lewis’ disappearance, according to TMZ. Since the commercial was broadcast, Phillips said Thursday, a tip line and his law office had received more than 100 tips. Some of them are “very specific,” but he declined to elaborate. “The most important thing,” he said, “is that people were talking about Don Lewis.”

Tweets by @forbes_india
Zaleb Brown, the emerging multifaceted music artist, sets a huge stepping stone in the hearts of the youth
Laid off during Covid-19, these employees turn entrepreneurs