SARS crisis, which began in southern China in 2002, ultimately killed 774 people worldwide whereas at least 908 people have died due to Coronavirus 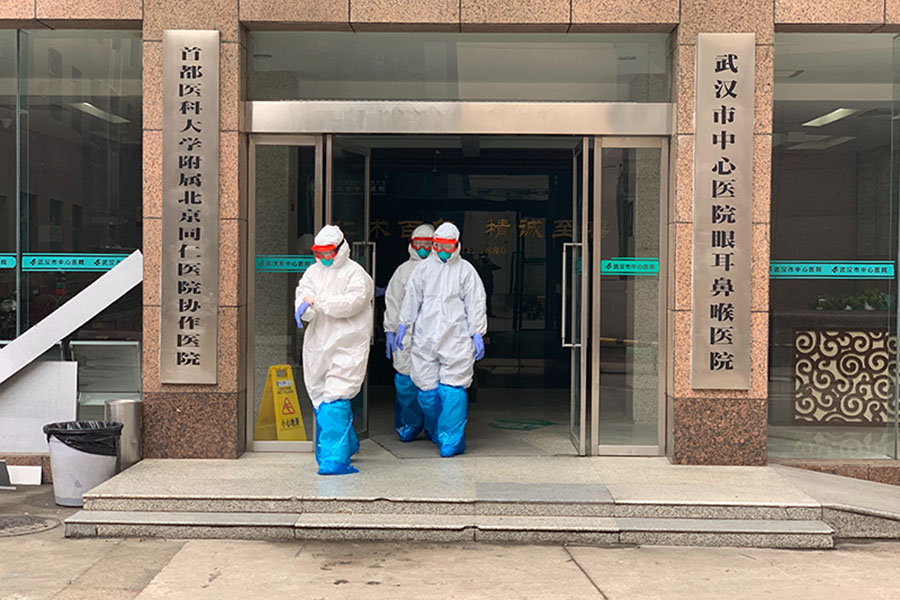 An entrance to the Wuhan City Central Hospital, in Wuhan, China, the epicenter of the coronavirus epidemic, Feb. 7, 2020. An American citizen died from the coronavirus in Wuhan on Saturday, officials said -- the first known American death from the illness, and likely to add to diplomatic friction over Beijing’s response to the epidemic. (Chris Buckley/The New York Times)


BEIJING — The coronavirus epidemic in China surpassed a grim milestone Sunday with a death toll that exceeds that of the SARS outbreak 17 years ago, a development that coincided with news that World Health Organization experts might soon be in the country to help stanch the crisis.

The outbreak has killed at least 908 people in China in the month since the first death was reported in January in Wuhan, the city where the coronavirus emerged in December, apparently in a wholesale food market. Two people have died outside China.

The SARS, or severe acute respiratory syndrome, crisis, which began in southern China in similar circumstances in 2002, ultimately killed 774 people worldwide over the course of several months.

The number of new deaths reported over the previous 24 hours — 97 — was the highest in China in a single day so far, according to figures announced Sunday by the country’s health commission. The number of infections overall in China now far exceeds that of SARS, rising above 40,100, compared with 8,000 then.

Offers of help from the WHO and the U.S. Centers for Disease Control and Prevention had languished for weeks, but on Sunday Cui Tiankai, the Chinese ambassador to the United States, said experts from the WHO would be allowed into China “very soon.”

Hours later WHO’s director general, Dr. Tedros Adhanom Ghebreyesus, announced on Twitter that an advance team was on its way.

The Chinese government’s inability to contain the outbreak has disrupted life across the country and beyond, provoking grief and outrage that the Communist Party state under Xi Jinping has also been scrambling to cauterize. The crisis threatens to disrupt people’s return to work on Monday after an already-extended break for the Lunar New Year.

Most cities, including the capital Beijing, have largely been shut down for two weeks, with residents warned to stay indoors. Most, by all appearances, have done so, creating eerily deserted cityscapes. It remains far from certain that anything like a normal workday will resume in most of the country, though the severity of imposed restrictions varies from city to city.

Some schools have announced they would delay the start of post-holiday schedules, as have many companies. Theaters, museums and other places plan to remain shut through the end of February.

Economists are predicting a significant blow to China’s economy, which could worsen significantly if businesses and factories struggle to resume functioning. Millions of Chinese away from home are in limbo because of travel restrictions and quarantines imposed after the virus emerged.

The Communist Party is already facing an extraordinary outpouring of public anger over its handling of the epidemic, especially the suppression of information early on that many people and experts believe might have reduced its lethal spread.

The furor crystallized with the death on Friday of Dr. Li Wenliang, a 34-year-old ophthalmologist who was reprimanded by his superiors and the police for privately alerting medical school classmates of an outbreak in Wuhan’s hospitals in late December. He ultimately contracted the coronavirus while treating a woman for glaucoma, not realizing that she was infected. 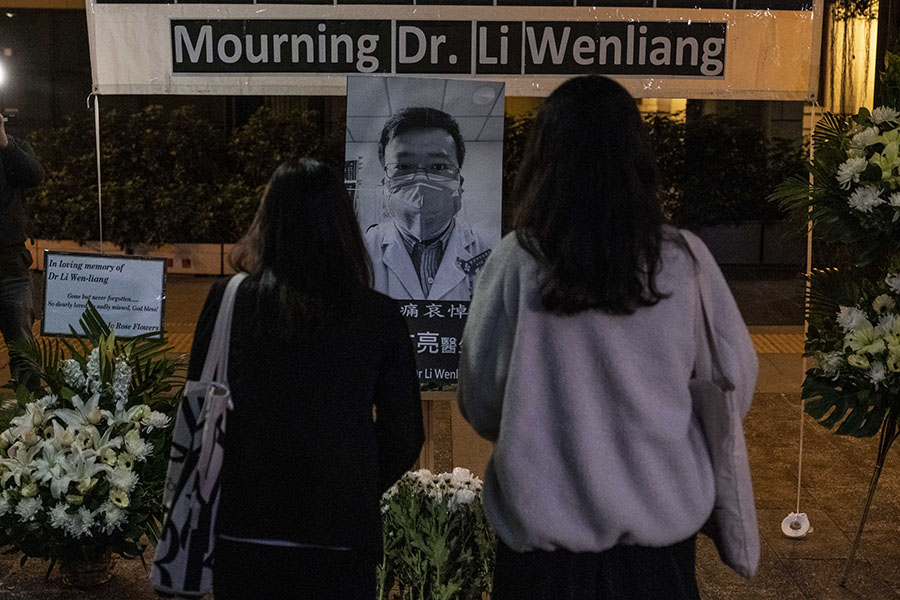 People pay respects at a memorial to Li Wenliang, who was silenced by the police for being one of the first to warn about the coronavirus, in Hong Kong, Feb. 7, 2020. The 34-year-old doctor death has set off an outpouring of grief and demands for official apologies on social media. (Lam Yik Fei/The New York Times)

His death inspired Chinese academics, professionals and others to create digital petitions calling for freedom of speech and other changes in how the country is governed, demands that Xi’s government seems unlikely to ever accept.

“Change, and only change, is the best commemoration of Dr. Li Wenliang,” said a petition that had been signed by 28 academics, lawyers and business figures by Sunday morning. “Otherwise, all our outrage and all our tears will end up as bubbles,” it said, calling the outbreak a man-made disaster.

Another petition, circulated on the site Matters, urged the government to apologize to Li and other medical workers hauled in by the police for sharing information about the virus. By Sunday, nearly 1,000 people across China had signed it. The latest coronavirus, like SARS, has spread around the world, though the most severe effects have been on those near where it began in Hubei province. Many doctors believe that deaths and infections have been grossly undercounted because testing facilities at hospitals and laboratories are under severe strain.

Vice Premier Sun Chunlan, who late last week ordered door-to-door checks for patients in Wuhan, visited Huanggang, a city of 7 million people roughly 50 miles downstream, and warned that its capacity for treating patients was worse than in Wuhan, where hospitals have been simply overwhelmed.

A vast majority of the infections and deaths have come in Hubei province, which has been effectively sealed, with the police restricting access by road, rail and air. The concentration of cases there has given the government greater confidence in imposing the onerous measures on cities in the region.

There have been only two confirmed deaths outside mainland China — one in Hong Kong and one in the Philippines — though from Russia to the United States the specter of a pandemic has prompted many countries to restrict visitors from China. That has prompted major airlines to slash their flight schedules, with some suspending travel to mainland China and Hong Kong altogether.

In Hong Kong, 3,600 passengers and crew members of a cruise ship were allowed to disembark on Sunday after being held at the dock for four days.

Health officials in the city, a semiautonomous region of China, quarantined the ship, World Dream, in port on Wednesday after eight passengers from the mainland on a previous cruise were found to be infected with the coronavirus. None of the crew members tested positive for the disease, so the quarantine was lifted.

“I felt really bored staying in my room, but we know that the quarantine is to keep everyone else in the city safe,” Charlotte Chan, a sales executive, said after she disembarked wearing two layers of masks.

Hong Kong has begun requiring anyone who has traveled to the mainland to undergo a two-week quarantine, a measure adopted after significant public pressure and a strike by hospital workers.

Nine members of a family were infected after sharing a communal hot pot meal last month at a reunion. After a 24-year-old man and his 91-year-old grandmother tested positive for the virus, his parents, aunts and cousins were also found to be infected. Several relatives at the gathering had traveled from Guangdong province on the mainland.

As of Sunday, there have been 36 cases in Hong Kong, but the family cluster has prompted health officials to warn that a community outbreak is probably inevitable despite quarantines.

“It can at most delay the spread of the disease,” Chuang Shuk-kwan, an official with Hong Kong’s health department, said. 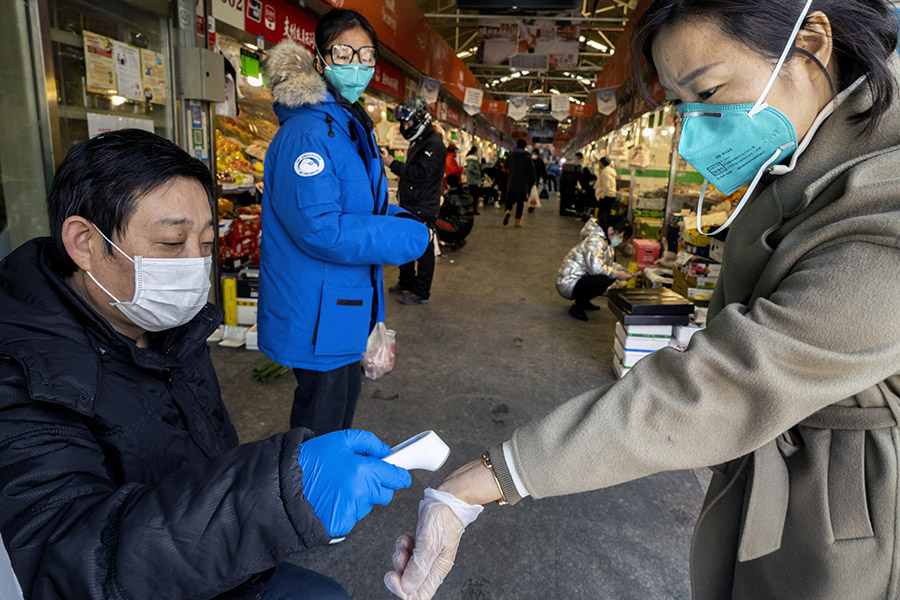 A woman is checked for fever before entering a market in Beijing on Sunday, Feb. 9, 2020. The coronavirus death toll in China has risen to 811, surpassing the toll from the SARS epidemic of 2002-3, according to official data released on Sunday. (Giulia Marchi/The New York Times)

In a possible sign of good news, the number of new cases confirmed in China has stabilized in recent days. World Health Organization officials, though, cautioned against reading too much into the figures, saying that Wuhan and other cities in Hubei province were still in the midst of a “very intense outbreak.”

The WHO advance team traveling on Sunday was being led by Dr. Bruce Aylward, a veteran of the global fight against the 2014 Ebola outbreak.

“We are coordinating with the World Health Organization,” Cui, the Chinese ambassador, said on CBS’ “Face the Nation.” “I’m sure that they will be going to China very soon.”

Cui declined to say whether a team of experts from the CDC would also be allowed into China. He suggested instead that U.S. experts could be admitted as part of the WHO or as individuals.

Tedros, the WHO director, has echoed the Chinese government’s optimistic assessments, a stance that has drawn criticism as being overly solicitous. He said the measures put in place in Hubei province — the lockdown of entire cities and more than 50 million people — appeared to be paying off, though he warned that outbreaks like this one are unpredictable.

“We have to understand it with caution, because it can show stability for a few days and then they can shoot up,” he said.