With his new foundation, actor Forest Whitaker is playing peacekeeper in some of the most dangerous places in the world 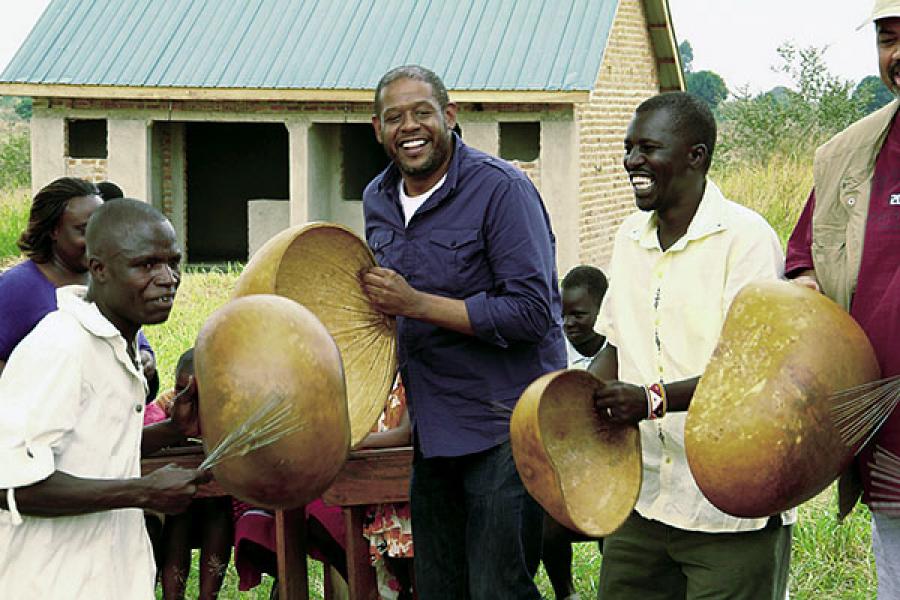 Image: Shiv Mandavia
Finding a cause Forest Whitaker and Hope North founder Okello Sam play the drums at the school in Uganda

Six years ago, while in Uganda filming The Last King of Scotland, actor Forest Whitaker stopped by a school for orphans called Hope North. Its founder was the dance and theatre artist Okello Kelo Sam, who had taught Whitaker a warrior dance for the movie. At Hope North, Whitaker met with boy after boy—all former child soldiers—who told him harrowing stories about fighting and killing in Uganda’s bloody civil war. One story, in particular, stuck with him.

A boy told Whitaker that the Lord’s Resistance Army, led by Joseph Kony, abducted his family and then forced him to watch as they murdered his mother. Months later, the rebels ordered the boy to shoot his own father. When he refused, the rebels tortured his father to death and made the boy watch. After eight wretched years, the boy managed to escape to his original community. But he felt so out of place there that he eventually returned to the rebels. “He went back to the people who had killed his mother and father. This is what he knows. This is what he was,” says Whitaker. “How do you psychologically, emotionally help him move forward?”

By the time Whitaker left Hope North, he’d laid the capstone for the school’s new laboratory building—a building he’d paid for with a $30,000 donation.

That small financial gift has since turned into something much larger: Whitaker has created his own foundation, PeaceEarth, which has $800,000 in programmes planned. (Whitaker won’t disclose his personal donation.) Last month, his foundation, together with Unesco (where he is a goodwill ambassador), rolled out its first on-the-ground effort to restore peace in Uganda: A conflict-resolution and peace-building workshop at Hope North. Less than a week later, PeaceEarth and its various partners held a similar workshop with young people from South Sudan. From these seeds, Whitaker has the ambitious plan to grow a movement in Africa. “My goal is to cultivate the next generation of peace and community builders,” says the 51-year-old actor, who, ironically enough, won an Oscar for his portrayal of mass murdering Ugandan dictator Idi Amin in The Last King of Scotland.  “Listening to their experiences and their stories is really what pushed me” to do this.

But his own background played a role, too. Growing up in South Central Los Angeles, Whitaker witnessed a lot of violence. His grandmother lived near buildings where the Black Panthers and the Symbionese Liberation Army operated; both were attacked by law enforcement. Whitaker also watched firsthand the rise of Los Angeles gangs such as the Crips and the Bloods. But the impact of violence was most vividly brought home, literally, by a cousin who fought in Vietnam. Before his deployment, that cousin liked to draw and would eagerly help the eight-year-old Whitaker with his classroom art projects. “At school, they would talk about what a great artist I was,” says Whitaker. But then the cousin went to Vietnam. When he returned, Whitaker says, he was terrifyingly withdrawn and never worked on art again. As a young boy, Whitaker found it difficult to understand what had happened. But now he clearly sees the parallels between his cousin and those war-ravaged kids in Africa.

As an actor, Whitaker is known for his extensive efforts to get into character. To portray a serene assassin in Ghost Dog: The Way of the Samurai, he studied Eastern and Egyptian philosophy and samurai meditation. He locked himself in a downtown Los Angeles loft with a saxophone to prepare for his role as Charlie Parker in Bird. Whitaker has taken a similar, if less intense, approach to peace-building efforts.

In addition to his work for Unesco, he co-founded the International Institute for Peace at Rutgers University last May, and is pursuing a degree in peace and reconciliation studies from New York University’s Gallatin School. He also produced Kassim the Dream, a documentary about a Ugandan child soldier turned world championship boxer, and Rising from Ashes, about Rwandan genocide survivors who formed the first national cycling team. Recently, while filming in South Africa, he met with Desmond Tutu.

Building peace is an esoteric goal, one that’s hard to measure and, maybe, even harder to achieve, due to the perpetual violence in war-torn places such as Uganda and South Sudan. “Renewed cycles of conflict emerge out of places where youth have been involved in conflict and they don’t have a lot of things to go to,” says John Paul Lederach, a professor of international peace building at Notre Dame.

Hope North, Whitaker believes, can help fill that gap by providing a safe place, tucked away from the most violent areas of the country. The idea is that children can heal through participation in art and music and even, very simply, through the peaceful passage of time.

The best way to achieve his goals, Whitaker believes, is to become part of the community. PeaceEarth’s initial workshops at Hope North and in South Sudan will involve only 60 kids, many of them orphans, former child soldiers, or children of the rebels. But the work will be intense and ongoing, designed to help them gain confidence and peacekeeping skills. Lederach says research shows creating peace builders from within a community is far more effective than bringing them in from the outside.

In February, PeaceEarth will host another training programme in an elementary school in Des Moines, Iowa: A relocation spot for young refugees from war-stricken countries like Uganda, Sudan, Bosnia, and Iraq.

Whitaker’s cousin has never recovered from his war experience. “It devastated his life,” he says. With PeaceEarth Whitaker seeks a different outcome.