Saudi Aramco to raise $25.6 billion in biggest IPO ever

And the total could go higher. The company said underwriters could decide to sell an additional quantity of shares that would raise the proceeds to $29.4 billion

By Kate Kelly and Stanley Reed 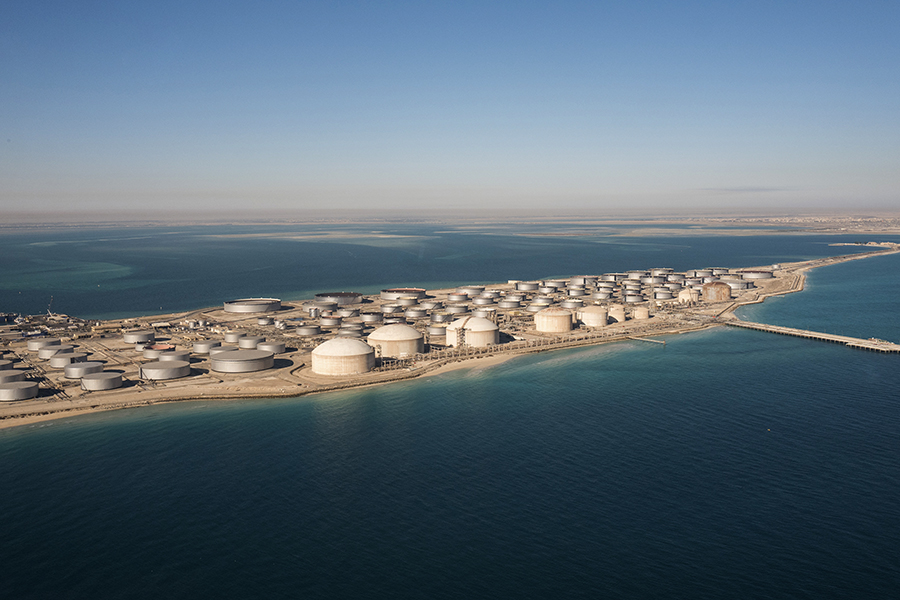 A tank farm for oil products in Dhahran, Saudi Arabia, Jan. 11, 2018. Saudi Arabia’s giant state-owned oil company, Saudi Aramco, on Thursday, Dec. 5, 2019, set the price of its initial public offering at a level that will raise $25.6 billion, a sum that is expected to make it the world’s biggest IPO, according to two people briefed on the pricing plan.
Image: Christophe Viseux/The New York Times

Saudi Arabia’s giant state-owned oil company, Saudi Aramco, on Thursday set the price of its initial public offering at a level that would raise $25.6 billion, a sum that is expected to make it the world’s biggest IPO.

Saudi Aramco said it had set the initial share price at 32 riyals, or about $8.53, the high end of the range it forecast last month. It plans to sell 3 billion shares, 1.5% of the company. At that price, the company would be worth $1.7 trillion.

The amount raised by the sale would exceed the $25 billion raised by Alibaba, the Chinese online retail company, in its initial offering five years ago on the New York Stock Exchange.

And the total could go higher. The company said underwriters could decide to sell an additional quantity of shares that would raise the proceeds to $29.4 billion.

The IPO will establish Aramco as one of the world’s most valuable companies, but the $1.7 trillion figure falls short of the Saudi royal family’s hopes of an offering that valued the company at close to $2 trillion.

Global investors proved to be skittish over the earlier valuations offered by the Saudi government. While its filings showed Aramco to be immensely profitable — it posted a profit of $68 billion for the first nine months of the year — its earnings have declined, and risks like global warming and geopolitical instability cast a pall over its prospects.

Aramco will sell its shares on the Riyadh stock market, the Tadawul. Trading is expected to begin Wednesday.

The IPO process has been agonizingly slow since Crown Prince Mohammed bin Salman, Saudi Arabia’s de facto ruler, first raised the idea of making the crown jewel of the Saudi economy a public company more than two years ago.

After big early promises, the Saudis have taken a more cautious approach, restricting the listing initially to Saudi Arabia in order to avoid the more rigorous disclosures that would be required in New York or London.

Despite Aramco’s big profits, oil companies are out of favor with some investors, who worry that concerns about the role of fossil fuels in climate change will eventually curb demand for Aramco’s large reserves of oil and gas.

Last month, the International Energy Agency forecast that world oil demand would flatten out in the 2030s because of increasingly efficient car engines and rising use of alternative energy sources.

In the shorter term, there are concerns that the combination of growing oil supplies from the United States, Canada, Brazil and other producers and weaker demand due to a slowing world economy may reduce Aramco’s profitability, potentially threatening its ability to pay the large dividends that it is promising investors.

The aerial attacks on Aramco facilities in September highlighted to potential investors the geopolitical risks of operating in the Persian Gulf. Iran was blamed for the attacks, which temporarily forced Aramco to cut production by more than half.

More broadly, the killing of dissident journalist Jamal Khashoggi by Saudi agents last year has hurt the reputation of Crown Prince Mohammed and may repel some investors.

A prospectus giving Aramco’s financial results reveals some long-hidden details about the size of Saudi Arabia’s oil fields. Chief among these is a monster called Ghawar, which extends for about 120 miles in the eastern part of the kingdom. The world’s largest oil field, according to the prospectus, Ghawar has accounted for more than half of Saudi Arabia’s production, yet it still has reserves of 48 billion barrels.

The oil wealth doesn’t stop there. The kingdom has four more fields that dwarf most others.

Aramco produced 13.6 million barrels per day in 2018 on average, more than three times the 3.8 million reported by Exxon Mobil, according to the report.

The company, founded by U.S. oil companies (Aramco is short for Arabian American Oil Co.), was nationalized by the Saudi government in the 1970s.