The microhotel is seeing a growth spurt, making small stylish

Inspired by Japanese pod hotels, the new version of the category, increasingly common in cities such as London, Paris and New York, are designed to the last square inch 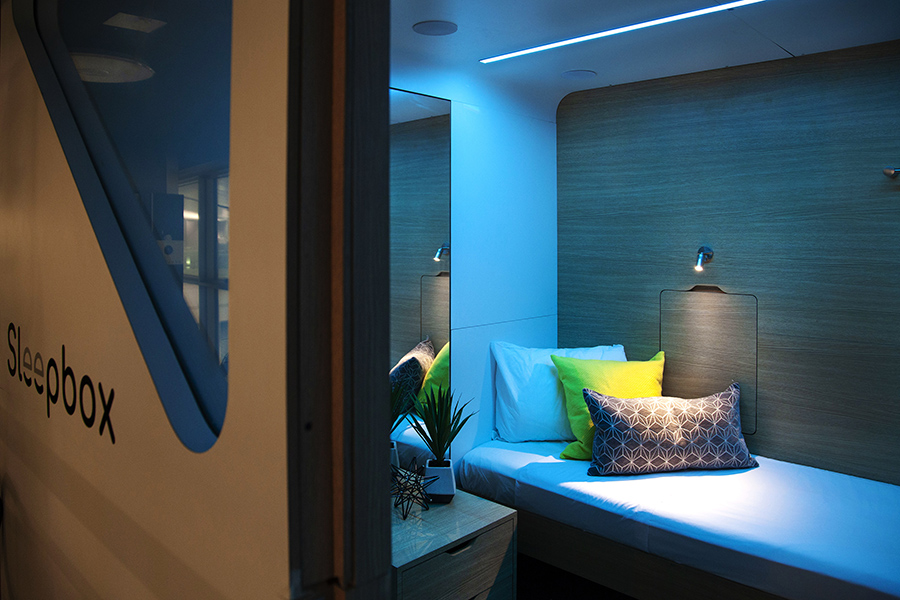 An undated photo by Natalie Kaufler of a Sleepbox in Concourse A at Dulles International Airport. The new version of microhotels, inspired by the Japanese capsule or pod hotels of 40 years ago that offered cheap, tiny accommodations to businessmen, are most common but not exclusive to big, expensive cities like New York, London and Paris
Image: Natalie Kaufler via The New York Times

They appeal to senior citizens and millennials, business travelers and backpackers. And they’re particularly attractive to hotel developers, who can pack in more guest rooms than in a typical hotel.

They’re known as microhotels, inspired by the Japanese capsule or pod hotels of 40 years ago that offered cheap, tiny accommodations to businessmen.

The new version — which are most common but not exclusive to big, expensive cities like New York, London and Paris — are designed, as one hotel expert put it, down to their last square inch. Their guest rooms are small — often half, or less, the size of a typical room in an urban hotel — with furniture that often can be folded up or stowed away, and bathrooms that usually have showers and toilets but no bathtubs. Wall-mounted TVs are also major space savers.

Their rates are substantially less than typical urban hotels’. Rates at Moxy hotels, a Marriott brand, start, for example, at $159 per night in the United States.

Henry Harteveldt, president of Atmosphere Research, a travel research company, said the process of squeezing more rooms into a hotel resembles what the airlines have been doing to increase the number of seats on an aircraft. While microhotel room rates and basic economy airfares might be relatively low, he said, the number of potential customers makes them attractive to operators.

Stephani Robson, a senior lecturer at the School of Hotel Administration at Cornell University, agreed that the concept of a microhotel room “is often more about meeting the needs of developers.”

Although the size of microhotel guest rooms is “minimalist,” Robson said, “it does not mean they are not comfortable or stylish. They’re very well planned, and they make optimal use of every square inch.”

Another plus for developers, said Mark Van Stekelenburg, managing director of CBRE Hotels Advisory, is that the design of microhotel guest rooms makes them cheaper to clean and maintain than larger, more traditional guest rooms.

And the microhotel concept appeals to companies like Marriott and Hilton, which recently introduced the Motto brand, because it allows them “to get more dots on the map,” said Michael Bellisario, lodging analyst for Baird. “The more properties and brands they have in all cities,” the greater potential for repeat business.

The idea of small hotel rooms arrived in the United States in 1989. The Microtel brand, introduced in Rochester, New York, served value-conscious guests by offering rooms half the size of traditional hotel rooms, with rates that were also half the cost. But industry experts do not consider Microtel, now owned by Wyndham, a microhotel brand by current standards, since its guest room sizes tend to be significantly larger than those of most newer microhotels.

Generally, microhotels today have guest rooms that range in size from about 115 to 220 square feet, depending on the number and size of beds. A typical room at an urban hotel in the United States can range from 250 to 300 square feet.

Other large hotel companies have rolled out their own brands: Introduced in 2014, Marriott’s Moxy has 44 hotels in Europe, Asia and North America today and has signed contracts for another 96. Hilton’s Motto, announced last fall, has more than a dozen projects under development in Europe, the United States and South America.

While another brand, Mama Shelter — developed by former Club Med hotel operators — considers its properties boutique hotels, its guest rooms can be as small as 118 square feet. There are currently nine Mama Shelter hotels, with 10 more under development. Accor owns 49% of the brand.

Hyatt acquired its own microhotel brand, tommie, when it bought Two Roads Hospitality in October.

Among the earliest independent microhotel brands were Yotel and Pod, which opened their first hotels in 2007.

The first Yotels were at airports in London and Amsterdam, and their guest rooms were designed by a British firm that also designs aircraft cabins. Today rates typically range from $200 to $229. Yotel has 12 properties, half located in airports and half in cities. Eighteen more are planned, including a new extended-stay concept.

There are four Pod hotels in New York, including one with extended-stay accommodations in Times Square. There is also a Pod in Washington, with others to open in Philadelphia and Los Angeles by next year.

There are now many more independent microhotel brands, including Hoxton Hotels, based in London; citizenM, based in the Netherlands; Arlo in New York; and the Hotel Hive, which opened in 2017 in a former federal workers’ rooming house in Washington.

Many microhotels feature expansive lobbies, with spaces designed for hanging out; dining and drinking; and coworking; Hive and Hoxton will soon open dedicated coworking spaces at some hotels.

Microhotel lobbies sometimes offer work by local artists; food and drink from popular local purveyors; and activities for guests and other visitors. Mama Shelter, for instance, offers free access to foosball tables and photo and video booths in the lobbies of many of its properties, while Arlo offers digital-detox happy hours, which are free to guests and available for a fee to visitors.

Guests staying at microhotels often have access to loyalty program benefits: Customers at Moxy, Motto, tommie and Mama Shelter hotels can or will be able to access the benefits of the programs of the brands’ parents, while some independent brands — including Yotel and Hive — offer their own programs.

Another type of compact sleeping accommodations, ranging in size from 30 to 56 square feet, are also now available post-security at some airports in the United States, including Atlanta, Dallas and Philadelphia. Minute Suites and Sleepbox, which operate these, charge guests by time increments that can range from 15 to 60 minutes to overnight. Many Minute Suites rooms have showers, but Sleepbox provides neither bathrooms nor showers; its guests must use the airport’s facilities.

The experiences of guests who stayed at two Manhattan microhotels recently show they can appeal to a wide variety of customers.

Sarah Yawn, 29, a Los Angeles-based national accounts manager for a Swedish watch company, stayed at the citizenM Bowery hotel. She praised its guest room décor, lobby that was “almost like a coworking environment, with a lot of young professionals,” and proximity to trendy shops.

Robert Smith, 58, is the chief financial officer of ClevR Mobility, an electric scooter company in Berkeley, California. A frequent business traveler, he has spent more than 50 nights at the Moxy Times Square hotel this year. He likes the company of its young staff — he called them “just happy, helpful people” — and the guests, who remind him of his four children, who are in their 20s.

The staff’s attentiveness likely stemmed, in part, from Smith’s recently attained top-tier status in Marriott’s loyalty program. The staff marked his new status by leaving a thank-you note, in green and red crayon, on the mirror in his room, and presenting him with a sweatshirt and sweatpants with the Moxy logo.

The lasting proof of all microhotels will come when the economy “slows, unemployment rates increase, and corporate and leisure travel gets curtailed,” said Jan Freitag, senior vice president of lodging insights for STR, a hotel research firm.

Van Stekelenburg said he did not anticipate that the attractiveness of the microhotel concept would dim any time soon. “We will see continued efforts by independent and large hotel companies. I believe they’re here to stay.”

Robson said she did not expect to see microhotels on suburban highways or resort destinations. “But where real estate costs are high and length of stay is relatively short, they will be very successful,” she said.