Diane von Furstenberg: Find your door, and push through it

The founder of the quintessential wrap dress talks about losing everything and building herself back up. 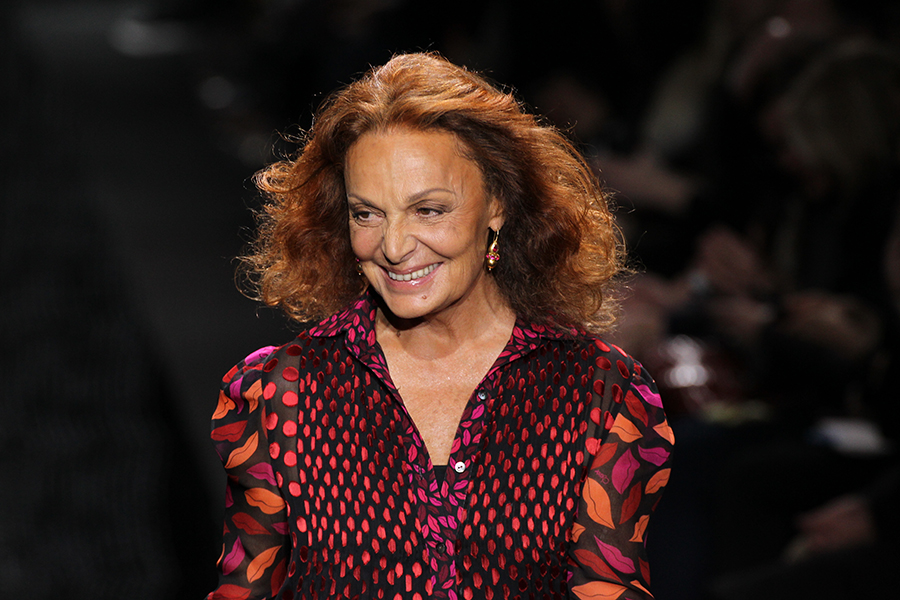 Diane von Furstenberg, founder of the DVF clothing line, gained fame in the 1970s for the wrap dress, a simple design that became a favorite look for working women. Praised for its comfort and elegance, the dress became more than a piece of clothing, but a symbol for women’s liberation.

“People say I made the dress. Yes, I made the dress, but really the dress made me,” says von Furstenberg. “Thanks to this dress, I became more confident and I shared that confidence with other women.”

Despite marrying German aristocrat Prince Egon von Furstenberg in her early 20s, she continued to sow her success and earn her own money (Diane von Furstenberg is one of the richest self-made women, worth an estimated $300 million). She opted for the title “Ms.” instead of “Princess” and stepped into the role of strong, female entrepreneur.

At a View From The Top event at Stanford Graduate School of Business, von Furstenberg discussed her start in fashion, her revamp of DVF in the 1990s, and the importance of cultivating your character.

Find Your Door — Then Push It Open
Unless there’s already a clear path for your profession, stay open to different ideas, advises von Furstenberg. Her story began with an informal internship with colorist Angelo Ferretti in Como, Italy, who was rebuilding his family’s business after World War II. When the small factory expanded and bought an abandoned stocking factory next door, they inherited tubular knitting machines. Von Furstenberg and Ferreti used the machines to make a product not yet worn by the masses: T-shirts.

“When you start your life, there are all of these doors,” von Furstenberg says. “And which is going to be your door — which door are you going to push? I went through my door when I met this Italian man.”

Not long afterward, von Furstenberg visited New York City and, inspired by fashion in the U.S., returned to Italy with ideas for patterns and prints for the clothes that would eventually lead to the wrap dress. Within four years, the factory was producing 25,000 dresses a week. Von Furstenberg was 27 years old.

“It’s very important to be open, and to be curious and to pay attention to what the universe sends you,” she says. “That man in the factory would end up being the most important thing in my life.”

Never Be a Victim
Von Furstenberg credits her mother, Liliane Nahmias, for her own courage. The Greek-born Nahmias was a survivor of the Holocaust and raised her daughter with the belief that fear was not an option. Von Furstenberg shared a story from before she was born, when Nahmias first returned from Auschwitz. She weighed a ghastly 49 pounds and was extremely malnourished. While recovering in the hospital, Nahmias filled out a form with her name, age, place of birth, and state of health.

“Even though she could not move, she wrote, ‘Excellent health’ on the document,” von Furstenberg recounts. “I’m very much a result of my mother: ‘Never be a victim.’ She taught me it was an advantage to be a woman.”

Hold On to Your Character
Von Furstenberg calls the first phase of DVF an “American dream,” a business that boomed for 14 years where she “could do no wrong.” But the success didn’t last. In the 1980s, the wrap dress saturated the market, and von Furstenberg sold the company, moved to Paris, and “lost it all.”

“When you create something, it goes up and it goes down,” she says. “You can lose everything, but you never lose your character.” When she saw her wrap dress popping up in vintage shops, von Furstenberg aimed to make a comeback — the daughters of her original customers now sought her designs. By the early 2000s, Saks Fifth Avenue and Barneys were selling the dress and von Furstenberg was an icon again. One of her dresses, worn by singer Whitney Houston, earned placement in the Smithsonian. In 2009, Michelle Obama wore a DVF wrap dress for the Obama family Christmas card. In von Furstenberg’s rise and fall of fortune, she says she never lost touch with who she is. “Character means you have to be demanding, you have to be disciplined. You have yourself as a refuge.”

Use Your Voice
Work on your relationship with yourself, then use your power to help others, von Furstenberg advised students. “When you are successful two things happen: One, you can pay your bills, and two, you have a voice,” she says. “And when you have a voice it’s your duty, but it’s also a gift and a privilege, to use it for people who have no voice.” Now, at age 71, von Furstenberg defines the values that keep her standing strong: nature, love, the brain and body, and character. She’s not as interested in what technology will bring in the future, but rather in what people can achieve by connecting with others. “I know everybody talks about artificial intelligence and all of that, but I really do think that the only way we can save humanity is by being humans,” she says. “Being kind and being human.”

Tweets by @forbes_india
PHOTOS: All the action from the Forbes India 30 Under 30 soirée
In Photos: Strikes, protests continue across Hong Kong