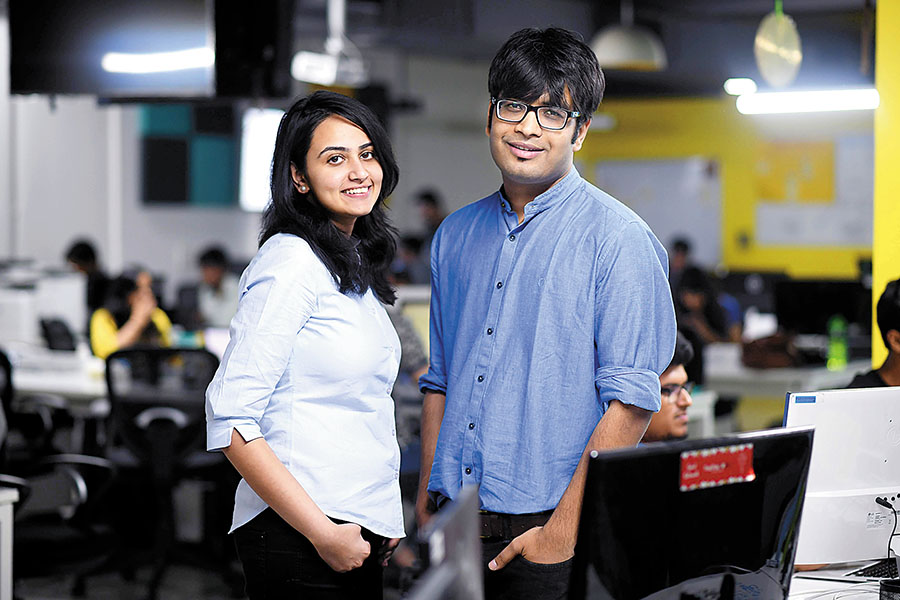 For all the talk about data being the new oil, Prukalpa Sankar has a slightly different view. “Data can be chaos,” says the 27-year-old. She would know. Fresh out of college, she set up SocialCops along with Varun Banka in 2012. The intelligence startup made order out of chaos by harnessing data to solve civic challenges. For instance, they helped bring LPG connections to 70 million below-poverty-line women under the Ujjwala Yojana scheme by mapping every one of India’s 6.4 lakh villages, and adding information like population and income level. They built Disha, India’s national data platform that brought data from 42 government schemes and 20 ministries onto a single dashboard. And they partnered with the United Nations to help countries, including Sri Lanka and Papua New Guinea, draw on data to track their progress on the Sustainable Development Goals.
But as Sankar and Banka, 28, dealt with data to address these problems, they realised their biggest bottleneck was internal. “Data teams are one of the most diverse ones,” says Sankar. At SocialCops, for example, a single team comprised individuals with complementary skills, from data scientists and machine learning engineers to economists, data analysts and business managers. “Each person had a different DNA, skillset and way of working.”

These led to cracks in the system. An engineer complained that the client’s problem statement wasn’t properly communicated to her, an analyst inserted an incorrect variable in the analysis, or a data scientist did not tell the team that some parts of the data were patchy.

To overcome these ‘collaboration overheads’, as they’re known in industry speak, Sankar and Banka developed a set of tools. These included quick fixes like making the data pipeline visual so that analysts could troubleshoot problems, and software that automated repetitive tasks. Every team member could access the same information in real time. “Think of it as a technology stack to help our human stack,” says Banka, who studied engineering at Nanyang Technological University in Singapore along with Sankar.

The tools proved effective. SocialCops was able to achieve double the quality outcomes in half the time, using just a third of resources, claims Sankar. Proof is in the kind of work they bagged: “It’s rare for a small startup to work with governments, the UN and large corporations,” she says.

Towards the end of 2017, the duo identified two trends that were shaping up. The first was that the internal tools they had built to manage their data had become fairly powerful. Second, advanced data analysis was changing the economics and practices of global businesses. Data teams, as a result, were moving into the mainstream. “It prompted us to ask whether our tools could empower teams around the world just like they helped our team,” says Sankar. Soon enough, Atlan, the duo’s second venture, was born in early 2018.

“Prukalpa and Varun could easily have carried on with SocialCops; it could have become a $10-20 million company. But they decided to pivot [to data management software development]. It was a bold decision that shows their drive,” says Manish Kheterpal, managing partner at WaterBridge Ventures, an early stage investment fund that recently led a `18 crore Series A investment in Atlan. The US-based 500 Startups and Singapore’s Hatcher also participated in the round, as did SocialCops existing investors Ratan Tata, former chairman of Tata Sons, and Rajan Anandan of Sequoia Capital.

Atlan already counts biggies like Unilever, WPP and GroupM, chemical producer BASF, McKinsey, Mahindra and Mahindra, and InMobi among its 200 customers across 50 countries.

There are four software products, explains Banka. ‘Collect’ allows users to easily collect high quality data from internal or external sources; ‘Grid’ curates data from hundreds of sources and transforms it into actionable insights across industries; ‘Discovery’ helps break down silos between teams, allowing for easy access to data; and ‘Workflows’ allows users to simplify and manage their daily work flow while automating repetitive tasks. Each of these products integrate with an organisation’s cloud ecosystem. Subscription fees start at $99 a month and go up to $1 million a year.

“All our solutions help organisations democratise their data,” says Banka. What that means is giving every stakeholder access to the right data at the right time and in the right format. Sankar cites the example of an FMCG client that made an additional `100 crore in revenue last quarter by drawing on their internal data as well as external village-level data made available by Atlan. It allowed them to push out the right products to the right people, instead of bombarding every district with random marketing initiatives. “Doing a project like this would take two years. They were able to do it in three months because they had access to the data at their fingertips,” she says.

Sankar adds, “Our aim is to do for data what Salesforce did for sales. Or Github did for engineering teams.” While she chose to remain tight-lipped about the Singapore-headquartered company’s revenues, Kheterpal believes that Atlan can become a $100 million company “in a few years”.

Sure enough, the opportunity is huge: Worldwide revenues for big data and business analytics are forecast to reach $189 billion this year and $274.3 billion by 2022, according to technology research firm IDC. Competition is also limited with only a handful of players in the US offering similar solutions; DataOps, as this new way of managing data to promote communication between teams and systems is known, is a very nascent area. Says Sankar, “It’s only because we were a data team ourselves at SocialCops that we chanced upon it.” [The duo is now solely focussed on Atlan; SocialCops runs as a “community platform” where they share their learnings.]

While Atlan has a first mover lead, challenges remain. As the company scales, it will have to decide what kind of customer it wants to service in order to develop a niche, says Kheterpal. “Corporates, for instance, require a sophisticated, deep data product platform, while governments often need high volume, but less complex kind of data,” he says. “Atlan caters to both at the moment, but eventually they will have to make some choices.”

Then there’s the challenge of building a product development company out of India. “Druva [data protection and management company] will hopefully have an IPO soon, and a few others are in the $50-100 million revenue range. But besides that India has not produced any large product development companies. We’ve traditionally had an IT services, KPO, BPO kind of mindset. Crossing that bridge to create a global force will be a challenge, but we’re confident the team will do it,” says Kheterpal.

After all, data—unlike oil—is abundant and ubiquitous— and can be more valuable.

Tweets by @forbesindia
How toymaker Zuru made a family of billionaires
Move over, life coaches-the trillion dollar 'excellence installation' industry is now in India