The value in venture capital 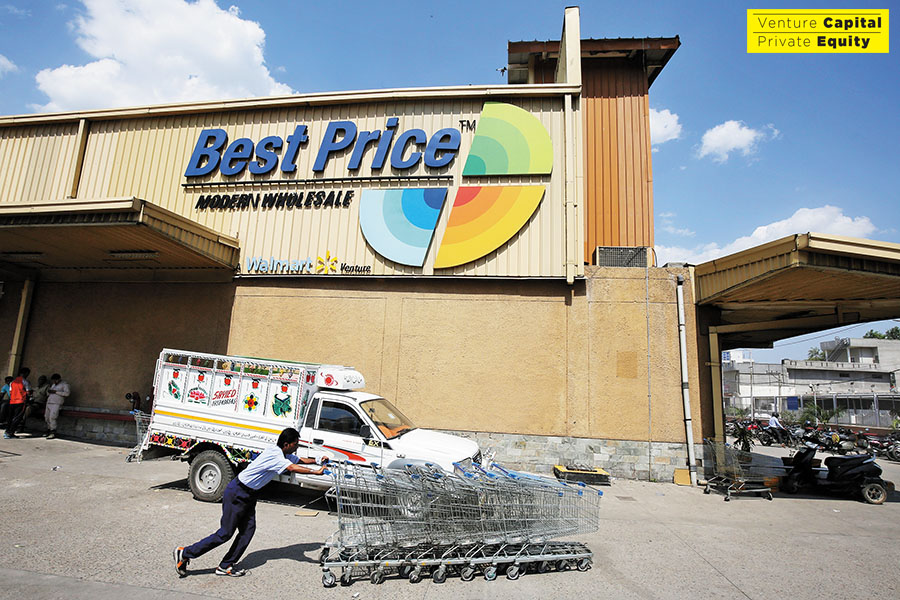 (left) The sale of Flipkart to Walmart in 2018 proved the system could deliver returns. Seen here is a Walmart wholesale store in Jammu
Image: Mukesh Gupta / Reuters

Indian venture capital (VC) has witnessed its fair share of highs and lows, and growing pains are inevitable for emerging asset classes. Industry analysts have been quick to jump on both unbridled euphoria and unwarranted pessimism at different points in time, especially the latter during the winter of 2015-16.

While capital from opportunistic or momentum investors ebbed during this period, long-term, seasoned ones kept the faith. They are now being rewarded for their patience. Sources of capital are available at every stage of the company’s life—a far cry from the early years of small cheque sizes and scepticism about tech businesses.

Since 2008, VC has helped Indian entrepreneurs drive value creation at scale, raising over $48 billion in capital from 2,300 unique investors, generating over $130 billion in value. Some of this value is still on paper, but 2018 and 2019 have witnessed strong momentum with respect to return of capital to LPs through mergers and acquisitions (M&A), secondary sales and sale of portfolios. VC-backed companies today contribute over $50 billion to India’s GDP, creating over 1.5 million jobs while disrupting traditional sectors and creating new ones.

Evolution of the Indian VC
VC investing is not new to India. Since the late ’90s, a few US-based VCs as well as growth private equity funds have been active. The internet boom of 2000 did not last long, but it gave rise to some exceptional companies like Baazee.com, MakeMyTrip, Info Edge, Times Internet and BillDesk. However, the Indian ecosystem witnessed a fundamental shift in 2006 as internet trends in the US and China, in the early 2000s, convinced investors that India would become the next tech hub.

VC investment was further encouraged by indications of strong GDP growth, optimism around a stable government, hope for a reform-friendly business environment and the sense that consumer spending was primed to grow. Since 2006, global VCs such as Accel, Saif, Matrix, Bessemer and Norwest invested proactively in India, aided by homegrown funds such as Helion, Nexus, Kalaari and IDG Ventures. Lee Fixel of Tiger Global took large and bold bets since 2008, including Flipkart, Ola, Freshworks, Myntra and Policybazaar.

Optimism reached its peak in 2014-15 when the Indian tech ecosystem witnessed a mix of both long term as well as momentum investors making technology bets. Copycat companies were funded easily with minimal business scrutiny. Capital destruction occurred as rationality returned. Entrepreneurs learnt to adapt; companies that received funding in that era were built on capital efficiency and India-specific models.

The sale of Flipkart to Walmart in early 2018 brought a renewed faith in the system’s ability to deliver returns. VC exits (excluding Flipkart) were projected to surpass $4 billion for the second consecutive year after 2017. Deal volumes have remained stable since 2017, with investors backing companies that are executing with discipline. India is now also attracting increased participation from Chinese corporates and funds like Tencent, Alibaba, Qiming, Shunwei, Morningside, CDH and others.

Indian VCs have played the role of friend and mentor, especially to young entrepreneurs lacking deep experience with operations and board dynamics. Some early investors have grown in stature to add significant operating value at later stages, while others choose to remain the founders’ confidantes in large board situations.

Reality of exits
Lack of initial public offerings (IPOs) from VC-backed companies was typically viewed as a sign of weakness, but India is successfully delivering exits via M&A and secondary sales today. The approach of founders towards their financing requirements is more important in determining IPO plans than at what stage the company is in its life cycle. There are at least 10 companies in the Indian tech ecosystem that can go public today, but have decided against it.

Both entrepreneurs and investors faced uncertainty over exit routes earlier, but today there are enough liquidity exits across sectors. M&A exits such as Flipkart, redBus, Citrus, Techprocess and Qwikcilver bode well for the market. And as the boundaries between public and private markets blur, we can see large pools of private capital flowing in from the likes of Softbank, Naspers DST, Tencent, sovereign wealth funds, pension funds and even large strategic investors. These investors are enabling VCs in India and offering returns with attractive multiples on invested capital. Over $1 billion worth of secondary deals are in the market today, reflecting positive investor sentiment.

Future of Indian VC
Unlike the past, VC funding is now available across various sub-sectors of technology-led businesses. More importantly, there are a few key differences between the euphoric times in the past vis-à-vis now.

Today’s market is witnessing breakout growth of internet access as we see rising user traction, greater technology adaption and comfort with online transactions. Indian founders have proven that they can build businesses that can fight well-funded multinational competition. Investors are now backing market leaders, successful entrepreneurs, India-first models and companies that are built on strong unit economics. Late-stage Chinese, European, Canadian and US funds with long-term horizons want to be aggressive in the Indian tech ecosystem and are taking selective bets. Despite investor engagement, we still see shallow funding in Series C and D funding ($30-60 million cheque size).

However, some traditional VCs such as Sequoia, through its growth fund, Goldman Sachs, TPG Growth, Sofina, Eight Roads and others are filling these gaps. VCs are also willing to double down by backing portfolio companies at the growth stage, as seen in recent rounds raised by Cure.fit and Dream11, to name a few. We are also seeing the emergence of Indian fund managers such as A91, Zodius, Multiples, True North, Premji Invest and Steadview. Going forward, India’s rapidly growing wealth is likely to give rise to domestic funds—even though that phenomenon is seen only in early stage funds at this moment.

Businesses of scale can only be built with external capital today, but contrary to common belief, founders are seeking out more than just capital. They are looking for partners who add value to their board. The relationship between investors and founders requires the former to mature as rapidly as the business and continue adding value at each stage. Ideas, entrepreneurs and capital flows are aplenty and Indian VC is well poised to continue its upward trajectory.