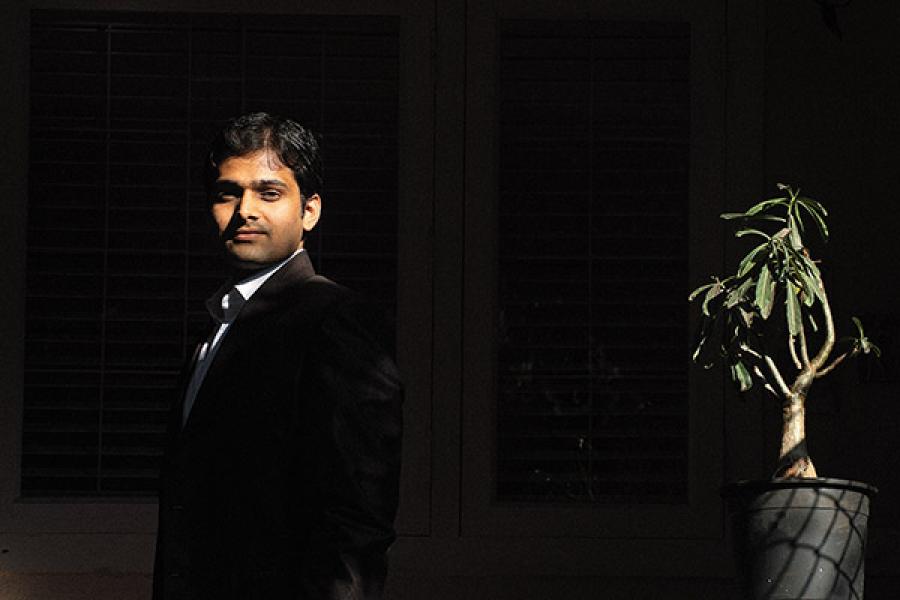 Image: Vikas Khot
The patented molecule cuts the cost of capturing CO2 by 50 percent, and uses it to make other products

For Aniruddha Sharma, the 27-year-old CEO of startup Carbon Clean Solutions (CCS), the event that shaped his career choice took place even before his parents got married. It was December 3, 1984, when Bhopal, Sharma’s hometown, witnessed the world’s second biggest chemical disaster. A gas leak at the Union Carbide factory led to the death of between 15,000 and 20,000 people, exposing over 500,000 to the toxic gas. On December 7, his parents got married. By the time he was born, horrific stories of the gas leak and its impact were endemic.

It is this central concern that led Sharma, a graduate from IIT-Kharagpur, to launch a company in 2009, which aimed to provide a more efficient method to capture Carbon Dioxide (CO2). “In my opinion, CO2 emissions have risen most uncontrollably and threaten to bring about cataclysmic changes in our environment if urgent steps are not taken to reduce them,” says Sharma.

In the 2012-13 financial year, till date CCS has earned revenues in excess of Rs 4 crore and expects more than a four-fold increase in FY 2015.

The secret to CCS’s steady success lies in an improved molecule, prepared by Sharma’s batchmate and CCS co-founder, Prateek Bumb. This patented molecule brings down the cost of capturing CO2 by as much as 50 percent, and uses it to make other useful products like baking soda and polymers.

CCS received a Rs 33 crore grant from the British government early in 2013, and the India arm of Solvay Chemicals started using its product. Soon after this, Hazel Mercantile (HML), which trades chemicals internationally, also signed up. CCS is in the process of signing up three new contracts that will get it to its target for FY 2015.

In addition, it has plants in five locations across the world: The UK, the US, the Netherlands, Germany and India. With the plants, Sharma says, “we are demonstrating the technology at customer sites globally to give comfort to larger markets and to create reference cases. Hence, there’s a certain impact on revenue. Also out of five, two are industrial-scale pilots. Only one plant has been operating since [the last] year-and-a-half.”

“I have been tracking their progress, and in my opinion, their formula is a significant improvement over MEA or Monoethanolamine, the dominant chemical used for carbon capture,” says Avinash Patkar, who has worked in the field of CO2 capture for 40 years and is an advisor on clean technology to a major Indian power company. Patkar believes that CCS has a better product than global giants like Dow Chemicals or BASF. Moreover, for India in particular, its product is better suited since the country has greater need for re-utilisation of CO2 (to make other usable products) instead of sequestration, as done in many Western countries. Sequestration involves pumping the captured CO2 into the ground.

THE ADVANTAGE
The carbon capture industry is worth $40 billion globally and it is mostly dominated by established giants such as Dow Chemicals, BASF and Mitsubishi.

But there are two reasons why a small company like CCS may hold great promise. One is the obvious advantage of capturing carbon at almost half the cost using the molecule patented by CCS.

“We realised that even [though] the technology to capture CO2 was invented in 1970, it has not been used as widely—leading, in turn, to excessive pollution—because of the cost. At our price point, it becomes more viable for many polluting factories to reduce CO2 emissions,” explains Sharma.

Two, unlike other competing options, CCS’s product does not require building a new CO2 capture plant; it can be run on an existing plant. This means companies can easily shift to a cheaper regime without spending six to seven times the cost of the existing plant to make a new one or waiting a year-and-a-half in doing so.

“Today there are close to 250,000 carbon capture plants globally, which use older generation molecules. Because our product does not require a new dedicated plant, it opens up a big market for us,” says Sharma.

THE CHALLENGE AHEAD
With the technological aspect sorted, the key challenge then becomes convincing customers to opt for its product for the first time.

In the first couple of years, Sharma and Bumb felt their young age work against them. “Senior company officials did not think that a couple of 25-year-olds can have such a solution,” says Sharma.

Moreover, there is the problem of ‘inertia’ among most operators. “People just don’t want to change a routine that has been running,” says Sharma. However, he admits this is more of a problem in India than outside, which explains why, barring one, all their plants are outside India.

“‘Play it safe’ is the biggest show stopper for an innovative product-driven company like ours,” he says.

But over time, CCS has gradually started overcoming the odds.

Nitin Kumar Didwania, a director at HML, was among the first few to have reposed faith in CCS. Early in January, HML decided to fund the capex of Rs 50 crore for putting up a CO2 capture unit using CCS’s molecules at Tata Chemical’s Mithapur plant in Gujarat.

Didwania, 38, had been tracking CCS’s performance over time. “I always had belief in Aniruddha and Prateek. I started my career at 14 so I know how they might have felt... They can be game changers since, after the big firms like BASF, there is hardly anybody to service the smaller clients,” says Didwania.

There is, of course, the possibility that the bigger players will come out with new technology that will take away CCS’s USP, but Sharma is confident: “It takes a few years to push a new product into the market, we’ll move on to something else till the time competition catches up.”

CCS is working on more breakthrough products. “One of the important problems with such plants [globally] is water; our next version will change that [water requirement] radically,” he adds.

In the short to medium term (next five-ten years), Sharma wants to focus on smaller clients and clients like Reliance, IOC and HPCL who have existing CO2 capture plants. But over the longer term, Sharma aims to make CCS a total solution provider. CO2 has huge commercial value.

“What CCS proposes is to capture CO2 and convert it into green chemicals like baking soda or a polymer,” he says.

(This story appears in the 07 February, 2014 issue of Forbes India. You can buy our tablet version from Magzter.com. To visit our Archives, click here.)