The radio cab service has the brand and the customers. So why is it still running up losses? 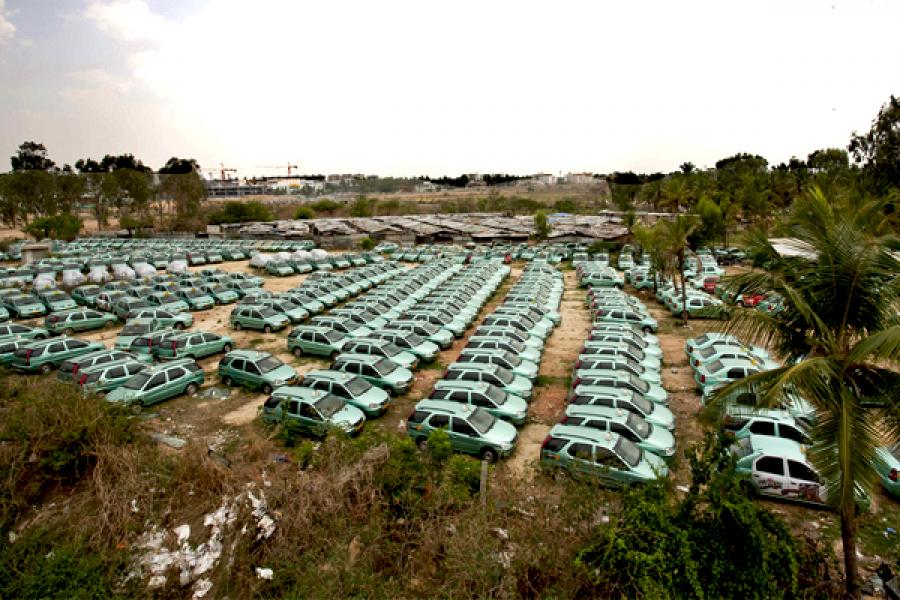 Image: Mallikarjun Katakol for Forbes India
Sometime in May 2012, more than 300 Meru cabs were found lying idle in a Bangalore parking lot near Marthahalli. The number of Meru cabs plying in Bangalore is a little more than 1,000. Sources say that even 25 percent of the fleet lying idle can put the company in the red.

When it began service in 2006, very few people gave Meru radio cab service a chance. Most thought it was too expensive, and would appeal only to a small sliver of the commuting market. They were all proven wrong.

In just six years, Meru has become a well recognised urban experience. Customers, especially women, find it safe to travel in a Meru cab and find it easy to book one. Cab drivers who were toiling away in rickety old taxis, have signed up to drive its clean, air-conditioned taxis. It would seem then that Meru has everything—brand, customers, and good technology—to become a profitable business.

That’s where it all comes unstuck. After six years, Meru is not yet profitable. It has a high attrition rate within its drivers’ ranks.

“Meru is more of a venture investment. The company had zero revenues when we got in. And today we have created an entire segment where none existed,” says Divya Sehgal, of India Value Fund, the majority investor. Sehgal handles the Meru investment for the fund.

So what lies beneath the business irony of a great brand that is losing money? Two factors: The extraordinary rate of expansion and its inability to hold on to drivers.

Out of its fleet of 5,500 cabs across four cities, only 3,500-3,800 cabs are currently operational. There have been at least three incidents of Meru drivers striking work. Out of every 10 drivers that sign up with it, at least three quit and join rivals or choose to go back to conventional cabs.

The rapid expansion seemed like a good idea when Meru launched in 2006. There was no radio taxi service, only cruising or off-the-stand cabs. Very often, no cabs were available in areas where customers needed one. Industry experts estimated that the radio taxi business would reach up to 30,000 cabs by 2017. (Today, there are only three pan-India players, which represents only 10 percent of the overall cab market. This is in spite of the fact that Meru has added tremendous capacity over the years.)

Cab services work at a certain critical network size. If the service is available only in limited parts of a city, it won’t gain in popularity. It won’t be financially viable either, because the fixed costs of setting up a back-office and maintenance workshops will be too high to amortise over a limited fleet size.

So, the India Value Fund-backed management team at Meru built its fleet from 45 cabs in 2007 to 5,000 across Mumbai, New Delhi, Bangalore and Hyderabad.

Just adding cabs isn’t enough; they need to be out running on the roads. Ronald Rosario, ex VP-operations of Meru cabs and current COO of taxiforsure.com, says, “On an average, a cab driver will spend 11 hours on the road to get at least four-and-a-half hours to five hours of a metered run.” These metered trips bring in the money.

This model hinges on the driver getting enough metered trips so that he can pay Meru and earn well for himself. In addition, he has to pay for fuel losses every time the cab is running without a customer. Hence, cab utilisation is key.

“We did an internal study a few years ago,” says Kunal Lalani, founder and CEO, Mega Cabs, “and found that you need to do a minimum of three-and-a-half trips to be profitable in a city.” That means, three long trips (typically airport drops and pickups) and a smaller one in between.

It is here the Meru’s biggest market, Mumbai, has given it a lot of problems. Cab drivers like the drop business, but the Mumbai Airport is smack in the middle of the city, so the drops are at shorter distances. This reduces earnings. Second, Mumbai has the lowest fares among large cities. The minute there is a drivers’ strike, the utilisation goes down. According to internal estimates at Meru, in Mumbai even 500 cabs lying idle will put the company in the red. Never mind if the remaining 1,500 are earning well.

The challenge is to think outside the airports. Rajiv Vij, CEO, Easy Cabs, says, “It is a wrong notion that the airport is the only business for a radio taxi service. In Singapore, cabs do a minimum of 28 drops a day and in New York that figure is 52.”

In Bangalore, the average distance for an intra-city travel (one way) is 10 km. Given Vij’s numbers on Singapore and New York, the business potential is between 280 and 520 km.

Meru has been tweaking its business model all along for greater efficiency. Initially, the drivers were full-time employees with fixed salaries. But Meru found that the drivers were not working hard enough. So to give them an incentive, it moved to the driver-franchisee model.

“The first six months, things were very good,” says Saleem Pasha, an ex-Meru cab driver from Bangalore, “But then things changed and we could not make any money.”

The fact is, most drivers want to work for eight hours and then go home. In Mumbai, there have been strikes by Meru drivers complaining of long working hours. Many say they effectively have just one non-working day in a month!

So, drivers leave. And when it doesn’t work out at other cab companies, they join back. Because drivers are in short supply, they can do so easily. Meru has a team of 20 people, which only does re-recruiting of drivers who wish to join back.

Divya Sehgal of India Value Fund though has a different point of view: “We don’t need to advertise in leading dailies and we’ve understood the needs of the drivers pretty well.” He and Meru CEO Siddharth Pahwa say that in all cities other than Mumbai, Meru is on its way to becoming EBIT positive.

Meanwhile, Meru is planning to pare its fleet size in the near future and remove old cabs which are hitting the company with high maintenance costs.

About five months ago, the management at Meru announced a new line of business, Meru Plus. Meru Plus will not own any cabs but will simply extend its brand and technology backbone to drivers who will own the cabs. This is an attempt to make the business asset-light and move to profitability.

Will all these manoeuvres help Meru make money? Not unless it fixes its business model.

Meru also needs to pare costs at the head office. For example, the chief financial officer’s salary went from Rs 11 lakh in 2008 to more than Rs 50 lakh in 2009—a wage increase of 354 percent. Such increases need to be justified, as it came when the company was making losses, as it continues to make now.

Show More
Thank you for your comment, we value your opinion and the time you took to write to us!
Comments 30

Tweets by @forbes_india
A $10 Million Mercedes Goes Under the Hammer
Podcast: Ratan Tata has Big Plans for the Tata Trusts