When people are angry, they vote for change

And that’s not bad. What’s unacceptable is demonising those with a different view 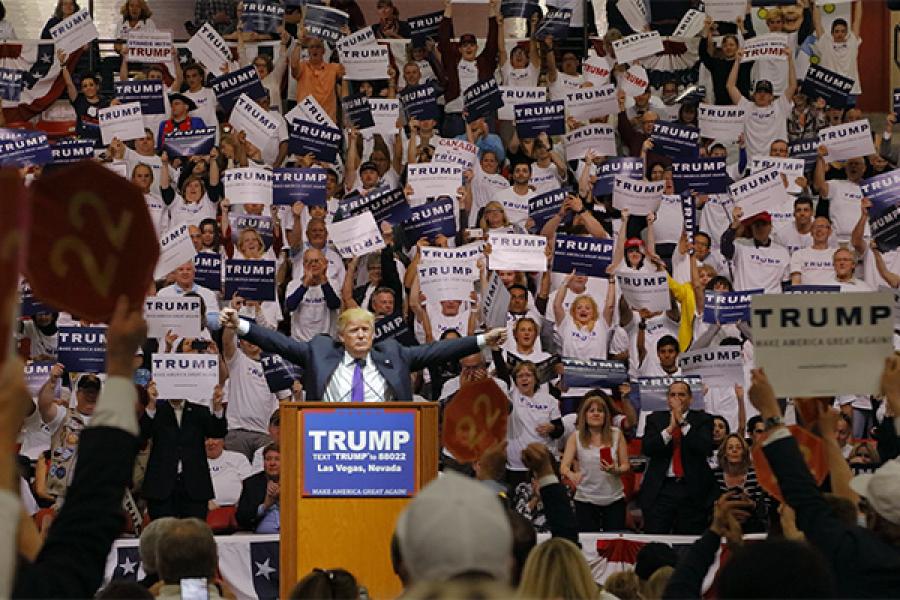 Marvin Zonis, professor at Chicago Booth, and Mike Kaufman recently co-authored an article, ‘Donald Trump and The Great Escape from Humiliation" in which they argue that Trump appeals to Americans who, over the past 15 years, feel humiliated

A lot has been said about the level of intolerance in India. We are not alone and we see the same in the other great pillar of democracy on this planet - the US. What does this imply for the future of democracy and why have differences of views become so polarised?

Our daughter is currently studying at Franklin and Marshall College. The president of F&M, Daniel Porterfield, recently wrote an article in Forbes where he referred to one of the courses taught there – ‘Democracy and Disagreement’ by Stephen Medvic. The course pushes 'students to grasp the value of conflicting ideas in a democratic society'. There are two typical responses to conflict - avoidance and demonising opponents. In the past, we avoided debating sensitive topics in order to be politically correct; they were simply swept under the carpet. Today, we have swung to the other side of the pendulum where opponents are demonised - we see a lot of that in the US Presidential Primary debates with the likes of Donald Trump. In India, we see the same in the debates in Parliament where our beloved members of parliament have perfected the art of preventing Parliament from working efficiently. Nearly every issue gets blown out of proportion thanks to social media, prime time TV, etc. Both these extreme responses - avoidance and demonising opponents - hurt democracy. Professor Medvic talks about why we need to foster discourse so that each one appreciates the other's point of view. We live in a dangerous world where no one wants to listen to the other side and it is becoming very difficult to solve problems. Debate is reduced to shouting matches and violence on television, in Parliament and on the streets. As a result, whoever shouts the loudest or has the police on their side wins the argument, at least in the short term.

Marvin Zonis, my professor at Chicago Booth, and Mike Kaufman recently co-authored an article, ‘Donald Trump and The Great Escape from Humiliation’. They argue that Trump appeals to Americans who, over the past 15 years, feel humiliated. This humiliation has diverse sources – the terrorist attack on the World Trade Centre, the loss of the wars in Afghanistan and Iraq, the stagnation of wages, the election of a black president, the economic collapse of 2008, the rise of the LGBT movement, etc. A large part of America feels humiliated in this new world and the consequence of this humiliation is rage. Trump panders to this rage.

In India also, despite our economic growth, there is still a sense of frustration. One of the reasons why Modi got elected was that people were angry with the way corruption had grown and economic growth had slowed down. Modi was the outsider in Delhi, just like Trump is in America. Modi promised to make India great, just like Trump promises to make America great.  When people are angry, they vote for change. And change need not be bad.

When people get angry they also demonise opponents. They become belligerent and intolerant. They agitate. To address this anger we need to focus on the real issues behind it – a growing feeling that the future looks tougher and less fair.  Create jobs and control inflation - that's all that is required to reduce this anger and get reelected in 2019.

4,084
Thank you for your comment, we value your opinion and the time you took to write to us!

Tweets by @forbes_india
Prev
Aadhaar – A transparent tool for all
Next
How much money is enough?