Yin and Yang of investing in India: Angels vs VCs

Interesting analysis and press coverage of who will blink first in the VC – PE negotiation around Snapdeal seems like a magnified playbook of the angel-VC space in India – a space less discussed, and less internalized. Wondered why this space is less discussed?

LetsVenture enables startups looking to raise seed / angel money to create investment ready profiles online, and connect to accredited Investors. They also allow startups to get their business plans reviewed by their experts as well as connect to mentors. 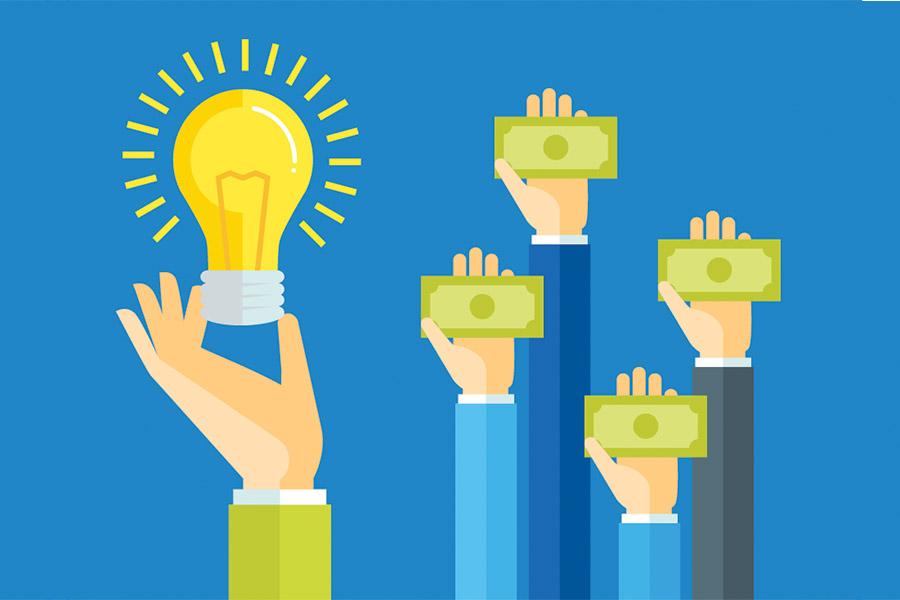 Interesting analysis and press coverage of who will blink first in the VC – PE negotiation around Snapdeal seems like a magnified playbook of the angel-VC space in India – a space less discussed, and less internalized. Wondered why this space is less discussed? Perhaps because at the angel-VC handoff, the dollars at play is still small, or perhaps because angels still believe they have less negotiating power or perhaps because the VCs believe they are the final buyer of angel stakes. Perhaps.

The latest CBInsights funnel on funding ecosystem in the US shows the ratios of startups moving to the next stage diminish rapidly. Going by numbers, this will comparatively be the same for India. For more companies to be available at the top of the funnel, it is imperative that angels work well with VCs for their portfolio companies. 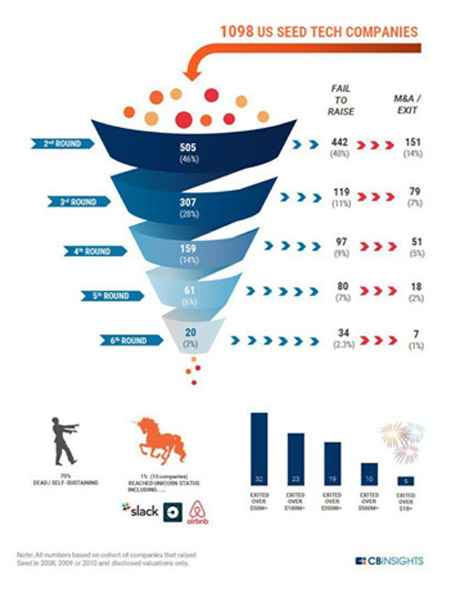 Talking of Angel VC Sentiment – Are we two sides of the same coin? Do we win Together?

With the rising decibel level on exits, in the beginning of 2017, we decided we would understand more of the Angel-VC sentiment in India. As a neutral platform, it was worthy to do a detailed analysis on this – to go beyond stories and beyond anecdotes. To demystify the “Perhaps”. We spoke to many angels and VC partners, surveyed angels and funds and came up with this report.

Talk to angels or VCs on what they think of the other side, and the conversation can go on for hours. Strong opinions, strong sentiments and the feeling of not being understood or treated fairly strongly emerge. Is this only an India phenomenon? For now we focused on India, but we have planned a similar survey across other geographies to get global comparisons.

52% of angels we surveyed said they didn’t get an exit easily or got unfair terms while only a third said they got a fair exit opportunity. “If you are a good angel who spends time with the portfolio, you don’t get an exit, and if you behave badly, you can almost get kicked off” – either way not a sweet deal for an angel. Does putting in exit terms in Term Sheets help? At LetsVenture our standard term sheet now has exit terms defined, but sometimes this could get re-negotiated at the next round.

Some VCs claim they want the angels to stick around till the company actually exits and everyone makes money. “We didn’t raise LP money to give angels an exit” – this could be a similar argument in all next rounds of funding where VCs work with PEs for the next round? There are no right answers here but limited exit opportunities also means limited funnel being created at the top. There have been deals where the VCs have claimed to have walked away from a deal either because the price was not right or because the angels were forcing an exit. As an entrepreneur myself, I know this could be the worst position to be for a founder – it's like wishing your family and your in-laws magically became best friends!

As an angel, if I had a magic wand, what would I ask the VC? The picture says it all. 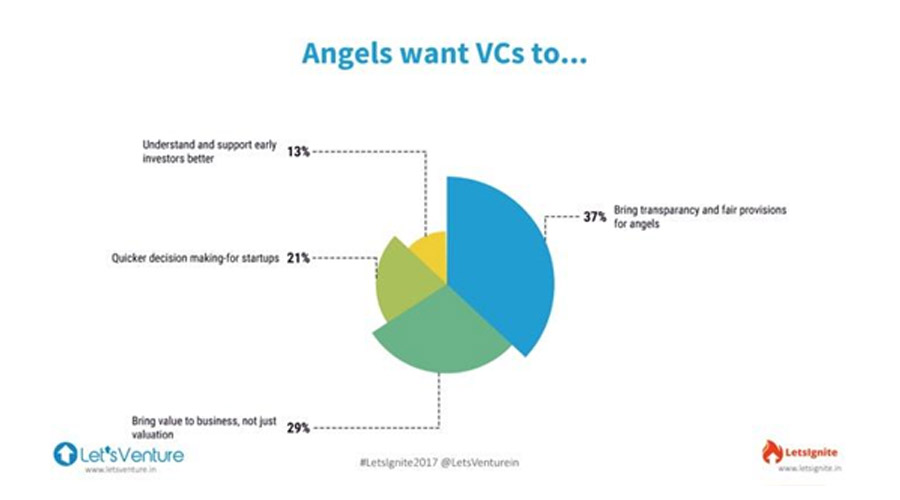 As a VC, if I had a wish list, what would that be?

The VCs wish the angels would be mature to know when to pass the baton, and let go of board seats if needed, and know that their role as an angel is finally over.  Father of the bride syndrome?  Besides, not all is rosy for VCs too. There are challenges in managing large number of angels in the company, some of whom could turn rogue, with a lot of passive angels not being “practitioners”. 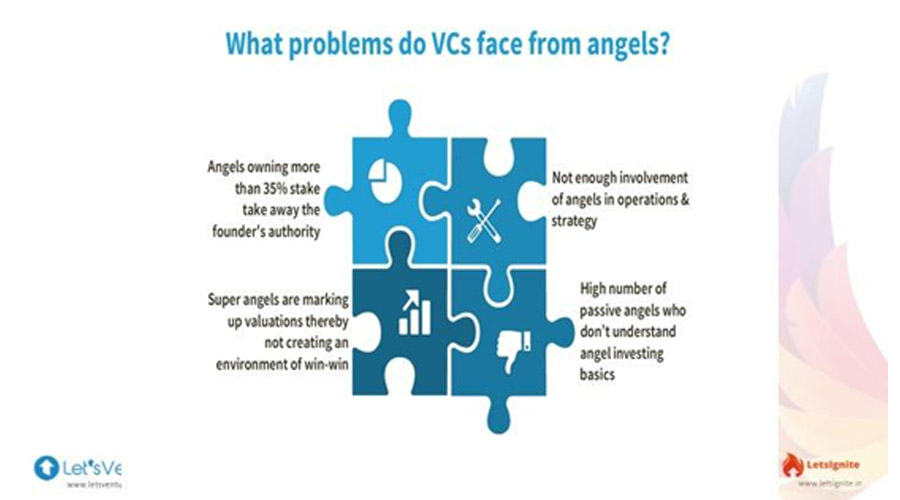 For Startup India to be real, for entrepreneurship to grow and mature, we need that angels be given some early wins. We need that every one who is part of this ecosystem, play their role fairly. Hopefully by questioning the status quo, and by igniting conversations at LetsVenture, we would have made a small difference. One startup at a time. One angel at a time. One deal at a time.

Crystal Gazing into 2017
Data shows there was no slow down in 2016, both in terms of number and value of deals. Will 2017 be the year of the flight of the angels? A year of caution? We asked angels and VCs this question while we ran the sentiment analysis on how they saw their activity in 2017.  80% of angels were optimistic, with 40% looking to do more deals in 2017, while 44% said they would maintain their deal activity in 2017. A minority were actually ‘bullish’! 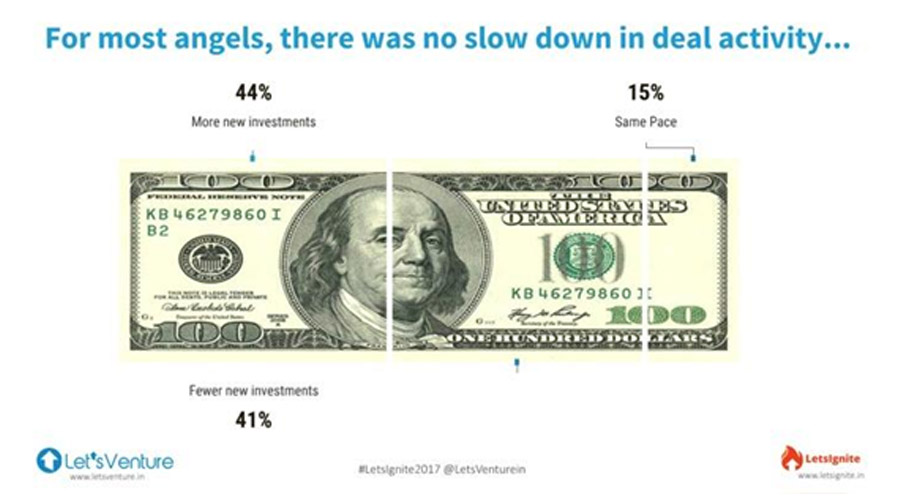 The Institutional investors / VCs surprisingly carried the same sentiment for their 2017 outlook.  While none were bullish, 83% said they were optimistic with only a small % saying they would only support their existing portfolio for follow-on. 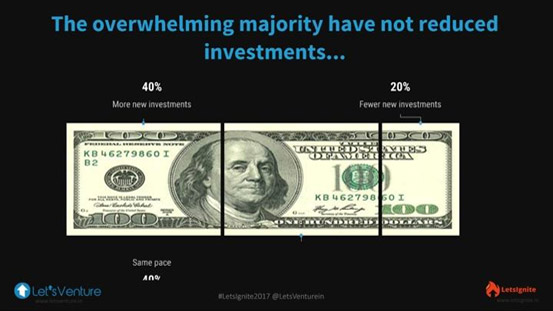 As a founder myself, I am looking forward to a great 2017! Hopefully as the ecosystem matures, and better business are built, there will be more shared wins and shared success.

5,801
Thank you for your comment, we value your opinion and the time you took to write to us!