This hand had a spectacular effect on the eventual outcome of a Teams match between two fairly strong teams. In the room where I happened to be kibitzing, the auction unraveled as given below. West is confronted by a number of difficult to fathom options on lead. Being an optimist and hoping to strike partner with both black Aces, he chose to start with his singleton club. The expert declarer in the South seat could not contain his frustration as the futility of the contract dawned on him – 3 obvious losers – one in each suit barring diamonds. Hoping that his team-mates might double the contract he found himself in, declarer recognized that the only hope of gaining on the board was to minimize the damage by settling for 10 tricks. After winning the Ace of clubs, he chose to cash two top trumps ending in dummy. At this point, he toyed with the idea of playing a low club (having dropped club Jack at trick one) in the hope of deceiving East. After much rumination, he came to the conclusion that if indeed the lead was from a singleton East would hop up with the King since the opponents were using standard carding methods (high-low to signal an even number)! Consequently, he played a diamond and suffered a mild tremor when East discarded a spade. Once the initial shock wore off, he mentally let out a squeal of delight! He had found a way home by sheer serendipity. The spade loser was parked on the fifth diamond and 11 tricks were in the bag. The bidding was more forthright and aggressive in the other room. North opted for the immediate raise to game (4♥) after hearing his partner open 1♥. East felt the  4♠ bid might turn out to be an excellent 2 way bet – either a cheap sacrifice or the perfect spot if partner turned up with the right cards. Having heard opener’s direct jump, South was not enthused about pushing ahead despite the excellent shape. North, a great believer that the 5 level belongs to the opponents, was in a minor quandary on hearing what was ostensibly a forcing pass by his partner! Double seemed the least of the evils, and, that is where the bidding concluded. NS do not have even the slightest whiff of defeating 4♠X. A glorious swing for the  uncomplicated Polish team. 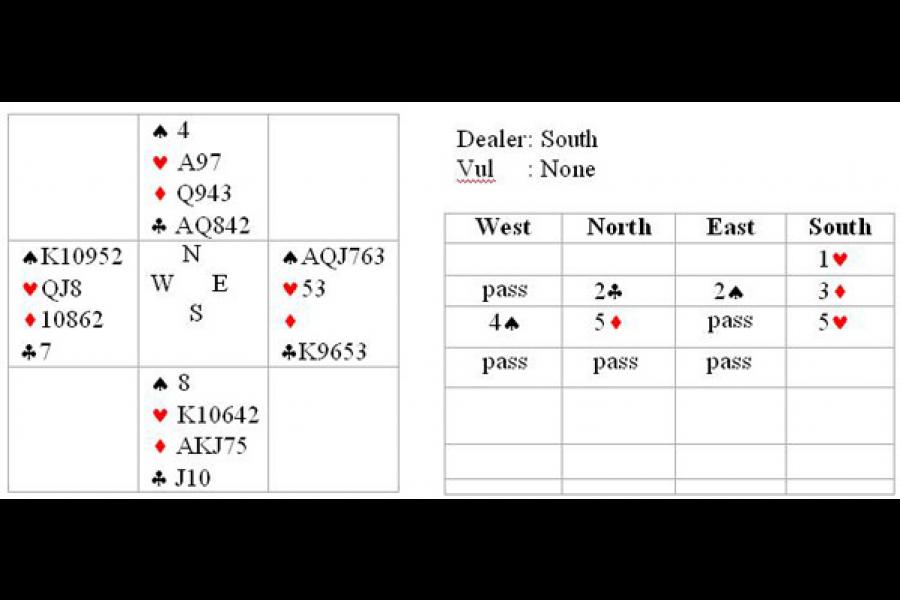 South finds himself at the wheel in 6NT, having responded 3NT to North’s 1♦ opening! West leads the ♣10. How do you intend to arrive at 12 tricks given that you have started life with only 8 sure winners? If both major suit finesses are on, there is a well established safety play to bring home 3 tricks in diamonds whenever declarer holds K9xx in diamonds. By playing the ♦A and then low towards the King, covering whatever East plays, you can protect against the most calamitous distribution and still secure three tricks. In case East shows out, simply play the King and a low card towards the knave! Given declarer’s actual holding, the safety play works only if West’s first card is either 9 or 10. What is the best way to tackle ♥s? Cash the Ace to guard against a singleton Queen and try the finesse only on the next round. You are pleasantly surprised to find West dropping ♥Q on the first round! Now all that remains to be done is to attempt a ♠ finesse. The gods are smiling because that holds as well! What next? Do you cash the top diamond and hope the 9 or 10 falls? If you play the ♦A now, West drops the 9. You compliment yourself on the brief but effective auction (1♦ - 3NT – 6NT) and are delighted to bring your knowledge of safety play technique to the fore at this moment. East plays the ♦7 on the second round and you cover smugly with the 8. Bad luck – the experts mugged you. West wins the Queen and returns a spade. You finesse and East comes up with the ♠K!

So what went wrong? It is essential to repeat the spade finesse before touching the diamonds. When East wins the second time, declarer has no choice but to play W for either Qx or Qxx in diamonds! The West seat was graced by the maestro, Anil Padhye, who was dealt ♠9762 ♥Q ♦Q96 19864! The lesson is that the genuine bridge legends never give up and create “chances” for themselves – mark the ♦9 for future reference!

15,751
Thank you for your comment, we value your opinion and the time you took to write to us!