The Mohanlal Bhartia Bridge Grand Prix (the 4th edition concluded a couple of weeks ago in New Delhi) has justifiably gained recognition as one of the most prestigious events in the Indian bridge calendar. Quite apart from the meticulous organization and amazing hospitality, the event serves to showcase the best Indian talent on offer. Kudos to the entire crew responsible for raising the bar!

Getting to the right spot as the auction proceeds is half the battle won at the highest levels of the game. Here are a couple of hands from the Pairs Final and a gem from the Teams Final which demonstrate why technique needs to be combined with imagination to achieve the thrill of coming to terms with the complexity of this game. 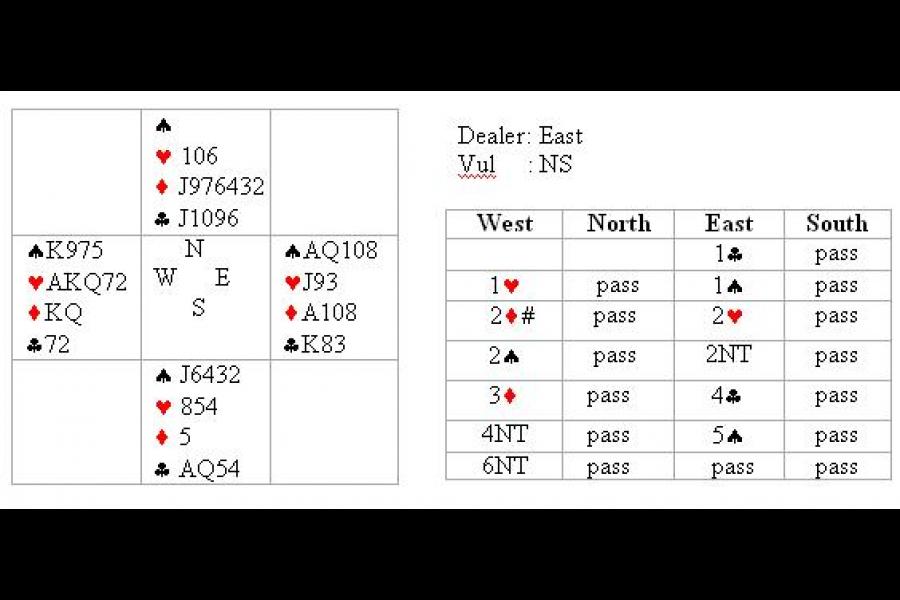 Playing Match-Points, most experts prefer to play in a no-trump contract provided the shape and combined high card assets provide the partnership an option. Given the horrible spade break and the actual lie of the cards, EW cannot arrive at more than 9 tricks with ♥s as trumps and 11 tricks in a spade contract. The 4-4 spade fit and 31 high card points lured a number of partnerships to the ill-fated 6♠ contract. Somewhat surprisingly, very few pairs found the way to reach the cast-iron 6NT slam. Playing Standard American or its many variants, the bidding table above offers one possible way of getting there. The bid of the fourth suit (FSF) - 2♦ - establishes that the partnership cannot stop below game. East confirms 3 cards in hearts since he would have chosen to bid 2♥ at his second turn with 4 card support. West now joins the party by communicating that he has four spades. Not only is the 2NT bid by East essential to protect the ♣K in case the partnership eventually lands in a NT contract, it conserves bidding space. The subsequent bids (3♦& 4♣) are cue-bids confirming first or second round control in the bid suits. West has heard enough to take charge and explores a slam in spades with the use of Roman Key Card (also known as 5 Ace) Blackwood. The 5 spade response by East confirms 2 Key cards and the Queen of the agreed trump suit. East either has the 2 minor suit Aces or the spade and diamond Ace! Either way 12 tricks are odds on in a NT contract - 5♥, 3♦, the club Ace and 3 spades or 5♥, 3♦ and 4 spades if East holds ♠AQ!

The next deal is highly nuanced and requires a number of subtle inferences to land in the best spot.

2♠ is fourth suit forcing to game and 3♦ clarifies that North has a 6 card diamond suit of decent quality. The next three bids are cues indicating first or second round control. The 4♣ bid by South is the stepping stone to reaching the slam since it conveys two crucial messages to partner – by consciously going past the level of 3NT (a favourite resting place, particularly at Match-Points) it suggests a better than minimum hand with interest in a diamond slam. 4♦ is RKCB with diamonds set as trumps. North, looking at 3 key cards knows that 4♥ means one with partner, either of the red suit Aces. If it is the ♦ Ace, and the bidding hints at ♣K and ♥K as well, then the diamond slam is likely to be in jeopardy on a heart lead. The prospect of South holding ♥KQ in addition is ruled out since he would have made an opening bid of 1NT with 15 points. The most likely extra values that South holds are either ♠K with one of the minor suit knaves or ♠QJ and the knave of diamonds. Spade King and the jack of clubs make 6NT a near certainty. The worst case is ♠QJ, ♥K, ♦AJ & ♣?K wherein 6NT will hinge on either the spade hook working or the heart Ace being favourably located and clubs dividing 3-3. Alternately if the key card is ♥Ace combined with 3 additional kings, the slam will depend on partner holding the ♦J. Even if South were to hold ♠QJ, ♥AK, ♦J & ♣K there are 11 certain tricks with either the spade finesse or club break providing the twelfth trick.

Not only did the deal below set Texan Aces on the path to victory, it was marked by high drama since the declarer – North – could have brought home a doubled contract. After partner pre-empts 3♣, North lands in 4♠. With just three deals to go in a needle match, you summon the courage to double and find yourself on lead holding ♠Q62 ♥K103 ♦A10762 ♣J4. Which card do you pick? The major suits are ruled out and the ♦A may well prove too risky. Finally the ♣J hits the baize and declarer ruffs with a low trump. He plays the trump Ace next hoping to drop the singleton 10 but to no avail.

Fearing a 4-1 trump split with East holding Q10xx for the double, he takes the marked heart finesse and ruffs a second club. Clearly, declarer is banking on East being 4-3-4-2 with an eventual heart throw-in to land his contract. With this in mind, he plays a low diamond towards dummy. Take a look at the hand below and decide where your sympathies lie!

East now rose with the Ace, gave his partner a subsequent diamond ruff and eventually collected a trick in each major. The mind of the expert is truly a black-box that is error-prone under intense pressure. Three nerve-wracking choices arose on a single deal – first, should South raise partner to game, second is the double warranted by East and finally, should declarer play East for 4-3-4-2 or 3-3-5-2.

As Mr Spock put it in Star Trek, “logic is a wreath of pretty flowers that smell bad”.

3,861
Thank you for your comment, we value your opinion and the time you took to write to us!