Bridge Logic: The Joy of The Early Bird...

The legendary Skid Simon was fond of saying “bid what you think you can make”. The advent of fancy bidding gadgets and an increasing sway towards “scientific” methods in competitive auctions has led many contemporary experts to neglect the wisdom inherent in the idea. A closer scrutiny of the merit of “getting the hand off your chest” is definitely worth thinking about. The deal featured below came up in the 1966 World Pairs Championship and severely dented the hopes of a renowned EW pair! 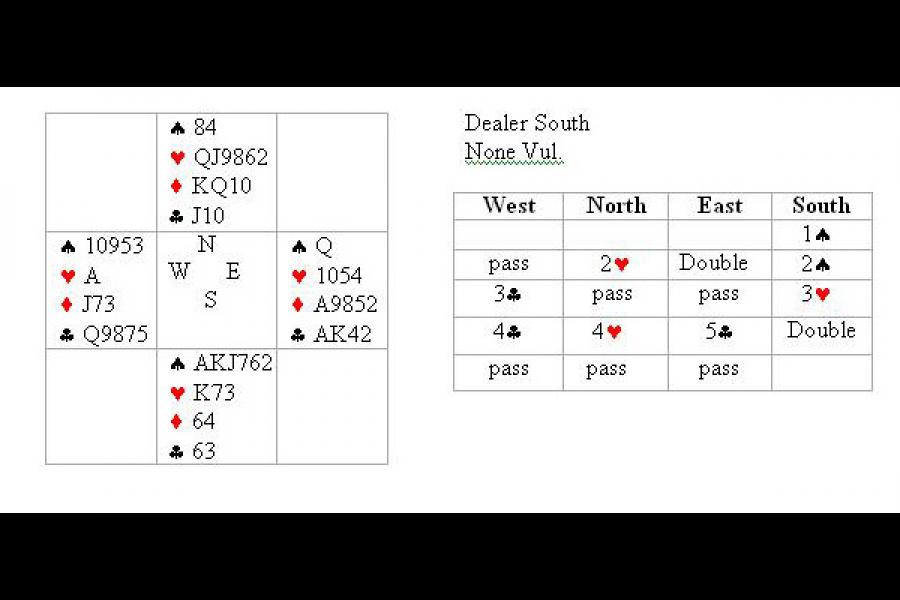 West loses the obvious three tricks, and prima facie minus 100 is not an earth shattering loss despite the fact that North-South are beaten by a trick in 4♥. The double by East suggests a contract in either of the un-bid suits. West, fully cognizant of the strength afforded by his major suit distribution, missed a trick in getting to the best result possible. The reasoning is rooted in elementary logic. If South had passed over the double, West would have been obliged to bid 3♣ even with tram tickets. The actual hand clearly warranted more than a free bid of 3♣. Based on the bidding till that point it is fairly difficult to construct an East hand that would not provide a decent play for 10 tricks with clubs as trumps. Equally, if West is prepared to bid 4♣ at his subsequent turn far better to bid the full value of the hand at the first opportunity. Not only would this warn partner not to bid again, it is almost certain that the opponents would also be silenced. The difference between scoring +130 for 4♣ and conceding -100 in 5♣ doubled is enormous in a top drawer match-points event! East can hardly be blamed for bidding 5 since his partner’s bidding suggests a 6 card suit and limited values in defence. His conclusion that the prospects of defeating 4♥ are remote is as it should be!

The 2♥ bid is a transfer to spades and  was well received by partner. As South was unable to draw trumps when the 4-1 break came to light, he chose to tackle clubs. Consequently West arrived at a ♣ ruff and the defence came to six tricks in all. However, a score of +200 was nothing to crow about for East-West given they had fluffed a sitter in 4♥ which scores with an overtrick. Quite apart from West’s failure to double 3♠, the greater crime was in not bidding 4♥ immediately over 2♠. In all likelihood, the heart game would have been doubled by South and led to a fabulous result when the overtrick rolls in. Much like the previous hand, East’s double suggests values in hearts and a minor. If West thinks carefully about partner’s distribution in conjunction with South’s initial 1NT (15-17) opening, it is virtually impossible to conceive a hand with partner that will not lead to 10 tricks with hearts as trumps.

Here is a final example of the advantage of getting in the first word.

At every single table except for the one where the British legend, Tony Priday, was North East –West had an uninterrupted auction ending at 4♠ with East as declarer. Not a single declarer failed to fulfill his contract. Tony Priday, a young talent at the time, was playing with the formidable Maurice Harrison Gray. With West as declarer, 4♠ has absolutely no chance! After the ♣ King was led, South refused to win a spade at trick 2. Needing to finesse in hearts, declarer played a diamond to King and chose to put up the heart Queen at the next trick. Now, a club return forced the table and despite the hearts dividing evenly and the ♦Q coming down on the third round the hapless declarer had to settle for 8 tricks!

2,292
Thank you for your comment, we value your opinion and the time you took to write to us!