Bridge Logic: The Power of Focus

Clarity of purpose leading to focused thought leads to wonderful results at the bridge table. What is your plan to arrive at 9 tricks on the opening lead of ♠2? 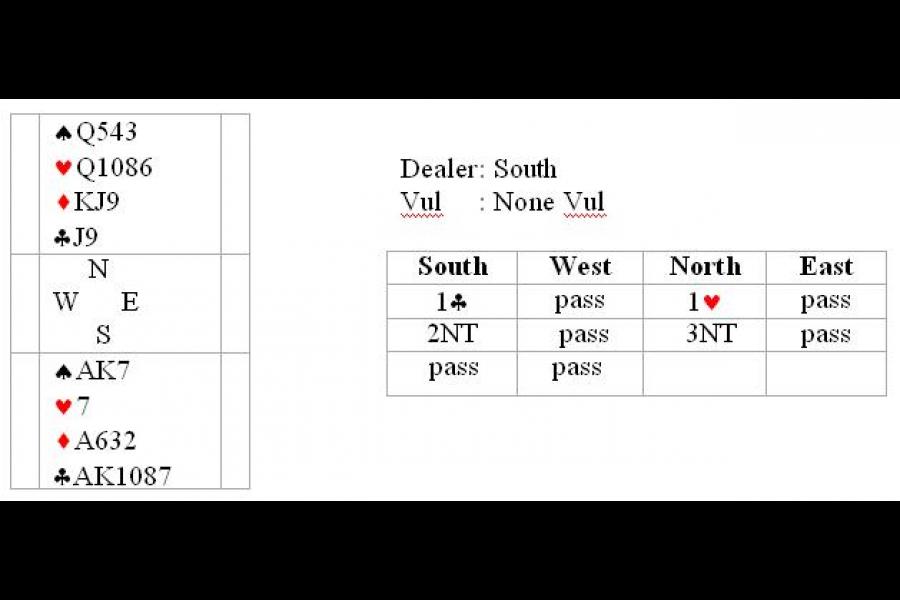 7 tricks are available off the top – 2 diamonds, 2 clubs and 3 spades. The clubs will always provide 2 more regardless of the distribution provided the defense does not switch to hearts and scamper away with 4 tricks in that suit. If East is required to lead hearts, there is no way the defense can take more than three heart tricks. Now, is there a ray of light on how to tackle the clubs? The intent must be to keep West off play by rejecting the club finesse and playing them off the top. Even if the finesse works, it is redundant!

What about an early diamond finesse as an alternate line of play? In case it fails, you will be forced to bring in the clubs without loss because the defense is always capable of eking out 3 heart tricks with minimal effort. Even if the diamond finesse works, you will need to figure out which is the best way to play clubs. In case you cash ♣AK you may well set up ♦Q for West. The defense may now collect 3 hearts apart from the winning queen in each minor! So the decision about what to play at trick 2 is really simple – you have no choice but to cash the top clubs! For the sake of completeness, West held ♠10962♥K532♦875 ♣Q3 in the actual deal. You receive the opening lead of the spade Jack and wonder what the best way to maximize your chances is? The only possible losers are in hearts. In case West holds both missing picture cards in hearts, you might end up losing 2 tricks in the suit. The double finesse in hearts gives you a slightly better than 75% chance of avoiding 2 losers. Is there a way to knock off the 24% chance that you might fail to arrive at 12 tricks? Thankfully, such a solution exists provided trumps divide 2-1!

Aim to ruff a spade high at trick 2 after winning the opening lead in dummy. Now a low trump to dummy and another spade ruffed with a picture. Repeat the plan to remove the last trump and eliminate the spades. Now you play 3 rounds of diamonds, ruff-ing the last one in dummy. Dummy and declarer end up with 3 hearts and a trump in the 4 card ending. Simply play a heart from dummy and insert the 10 in case East does not play an honour! West may win but must now either return a heart into AQ or give you a ruff & sluff! The key to the hand is timing it right so that you are in dummy after playing to the first nine tricks. West was a mere spectator holding ♠J1096♥KJ62♦J76 ♣75.

16,412
Thank you for your comment, we value your opinion and the time you took to write to us!

Tweets by @forbesindia
Prev
Bridge Logic: Simple, But Not Easy
Next
Bridge logic: Keep it simple