Here is a gem played by Bob Hamman at the 2008 Boston National Championships. After some fairly non-descript bidding, the many time World Champion landed in 3NT and was faced with the lead of ♥10. Would you have found the winning line that he did? Your first thoughts are about missing the small slam in clubs if ♣K is right. However, 3NT is a great contract and seems a wee bit too easy. At times like this, you need to ask yourself what can go wrong. Then find a plan to make sure you can cope with it. Where can you run into rough weather on this hand? The answer is slightly counter-intuitive: diamonds, not hearts! 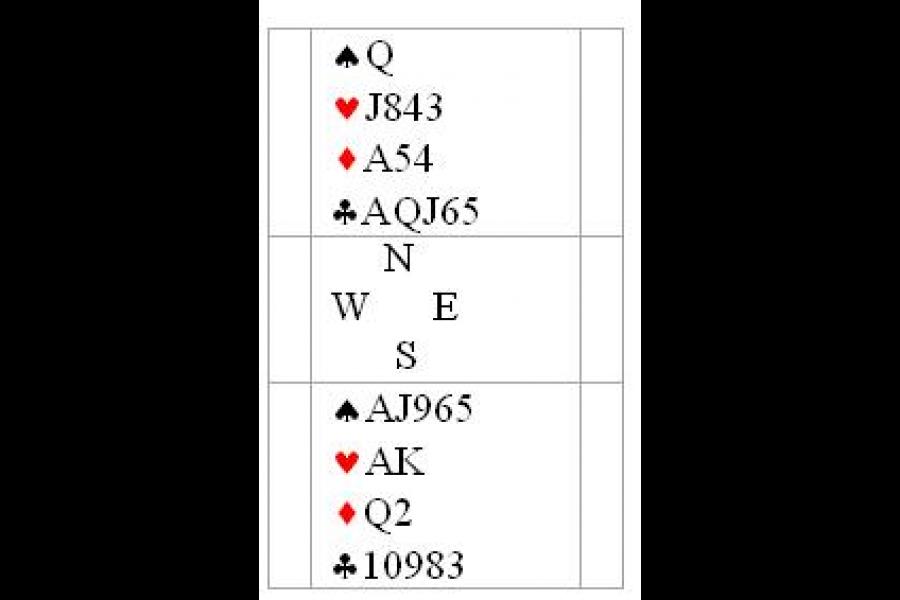 The aim must be to prevent East getting in early and leading a diamond towards the King, held by West. As you win the heart at trick one, it is important to recognize that if the club finesse loses and West holds the other two kings you are held to just 8 tricks – losing 3 diamonds, a spade and a club! The simple contract has just landed in the doldrums. So what is the solution to arrive at 9 tricks?

Lead the club 10 to the Ace and return ♠Q. In case East covers the card, your worries are over. Just drive out club King for 9 tricks. Unfortunately, West wins and returns a low heart. Now you cash the 2 high spades and hope the 10 drops. No such luck. Continue with the ♣9, which is won by East with the King. East shifts to the ♦J, but you are home and dry. The queen is covered by the King but all is well with your world – two tricks in each major, 4 clubs and a diamond adding to nine. The master play was crossing to ♣A at trick 2 to play spade queen and prevent the diamonds being attacked from the wrong side. You are among the best if you found the winning line! The West hand was ♠K10843♥105♦K876 ♣72. Almost 90% of the bridge players on the planet would land in 3NT on this deal regardless of their bidding system. The equally interesting truth is that less than one in every hundred declarers would make the contract! West starts with the ♣J and East follows with the 7.

You have started life with eight top tricks. Where do you hope to find the ninth? The major suits are hopeless. The club suit could be your saviour if it divides 3-3, which seems against the odds after the lead. Is there a way to guarantee 2 diamond tricks with your combined holding? If East has the King, problem solved. If the suit breaks 3-3, it is possible to establish a second trick no matter where the King lies by playing the suit thrice. But there is a “best solution” to find 2 diamond tricks with this combination!

Play a low diamond from both hands at trick 2! Assume the defense shifts to a major suit at the third trick. Declarer wins in hand, cashes ♦A, and assuming the King fails to drop, cashes a second club. If both defenders follow to the second club, try a third club! If clubs fail to split evenly, cross to ♠A and lead a diamond towards Qx.

This line succeeds whenever diamonds are 3-3, or East has the diamond King to any length as well as when West has either a singleton or doubleton King (which is why the odds favour this play in comparison with the immediate diamond finesse)! For academic interest, it also caters to the remote possibility of an even split in clubs. The West hand was ♠J97♥Q85♦K2 ♣J10982.

16,504
Thank you for your comment, we value your opinion and the time you took to write to us!