Lack of accurate information about Ebola virus and its treatment creating doubts; time to act before a disease turns into an epidemic 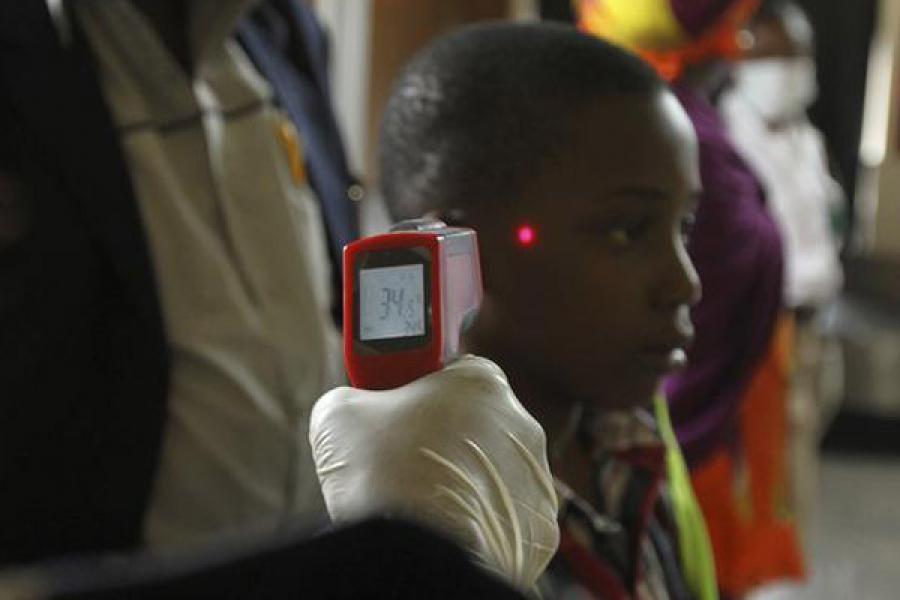 A boy's temperature is taken using an infrared digital laser thermometer at the Nnamdi Azikiwe International Airport on 11th August. Nigeria's commercial capital Lagos had 10 confirmed cases of Ebola, up from seven at the last count, and two patients died, including the Liberian who brought the virus in, the health minister said on 11th August, Monday. (Photo by Reuters)

I am overdue for a visit to West Africa where we have been working on a few transactions. This visit, therefore, is crucial.

Anyone who works in emerging markets will vouch for the need to keep reiterating to clients the intricacies of a process. Also, keeping them committed to a strategy previously agreed upon requires regular face-to-face meetings.

Rife as these markets are with opportunities, being nimble is the buzz word. And what others may describe as being fickle, in this part of the world, it is known as being merely ‘opportunistic’. In other words, people change direction often and promptly, and hence, there is the need for vigilance to keep things on track.

I suffer from the paranoia that well-thought through plans and half-done work can easily be shelved or postponed by my clients without warning. They may choose to chase the latest trend, lest they get left behind.

So, for the last two decades of my work in emerging markets, I have developed the habit of being close (to my clients), not through calls and mails, but through visits and late-evening dinners. My valiant attempts to keep things together in this manner have reaped rewards for me, so I am not going to change these habits.

But the Ebola crisis has got me thinking.

Perhaps, for the first time in my life, I am asking people, going into WHO pronouncements and reading up on the virus about how it is spread. This will help me decide whether I should actually go ahead with the trip instead of going with my gut feeling which says it will be alright if I travel.

Prima facie, it appears it does not spread as easily as the common flu (someone coughing or sneezing next to you should not be a major threat). Therefore, a long flight next to an Ebola victim ought to be fine. However, it does spread through body fluids and so, I should be careful about shaking hands with people.

It appears less worrisome than I originally thought, but a niggling concern remains-there appears to be no vaccine to treat the virus and there is no cure for it either. Identifying it through blood tests can be definitive either on the second day or it can even stretch to the 21st day from the time a person contracts it.

It could be too late by the time the typical symptoms are noticed. The question bothering me, however, is: “Does anyone know enough about this? Why have so many health workers been affected?" I read that some of the affected Western health workers have been put on some trial drugs while the same has not been done for local workers.

A moral issue around what some might construe as favouritism vis-a-vis the risk of not being accused of attempting to find human guinea pigs will always thwart attempts to be uniformly adventurous with experimental drugs I imagine?

In one of the countries, local people have even refused entry to foreign volunteers as they feel they are the ones bringing in the disease.

A strange disease resurfaces, affects locals more than expatriates even though they all live there.

Western agencies and the multilaterals send in their people, but the suspicion remains... is everyone telling the truth or does anyone know exactly what is going on?

I used to live in Botswana in the early 1990s when similar questions, fears and denials used to be the norm in Southern Africa. The then president of South Africa had famously suggested that malnutrition was a major contributing factor to the spread of HIV. He was ridiculed and derided by all and sundry for trivialising the imminent epidemic and thereby undermining the belief system and the undeniable need for changes to personal habits to prevent HIV from proliferating. As someone who lived there, I always felt he had made a profound and poignant point. Not that medical science believes in poignancy and profoundness as the basis for any meaningful analysis or diagnosis.

But the key issue here was how much poor nutrition, lack of access to prompt medical care for the simplest of illnesses, and the chronic continuation and worsening of otherwise simple or curable medical conditions contributed to these viruses finding more fertile hosts.

Data has shown that these diseases, almost by default, tend to have a bias towards certain sections of society, almost like a programmed DNA missile head attached to them.

Further studies have proven that what could appear as some sort of a germ warfare unleashed on unsuspecting races is ultimately nothing, but a combination of lack of awareness, poor prevention, inadequate hygienic environment and to an extent, weaker (undernourished) immune systems that tend to create a vicious cycle of such diseases.

The Ebola pattern is eerily similar so far.

I called one of my clients and asked him if it was safe to travel. His answer said it all. “It doesn't affect people like us in the cities who live well." A familiar refrain of nonchalance that I hear so often in my travels around Africa... that "it’s a poor man's disease" or that "it doesn't affect normal people"... whoever these "new normals" are.

I recalled the time when we were working on a health care project in Zambia. The observations I made then were uncanny and still hold true. Most of Africa's medical spend, which in any case is woefully below any reasonably recommended expectations, is perversely spent either during crisis or to treat terminal cases. Early diagnosis or preventive medication or for that matter proactive intervention is absent as access is woefully poor and supply limited. Basic sterilisation and refrigeration is also missing.

Thus what should be primary health care very often becomes the treatment of last resort. As a result, families spend fortunes to keep cases alive which are too late to treat.

I am afraid that yet again, the world is possibly chasing a horse that has already bolted and pretending that "we care".

How nice it would be if Big Pharma and NGOs and multilaterals took it upon themselves to engage with local governments and local communities proactively. And they work together to find indigenous solutions to health, hygiene and education.

Simple things like providing shoes to poor children and teaching them basic hand wash techniques could prevent so many of these diseases from spreading so easily.

It isn’t a pipe dream.

Not every disease has to become an epidemic before we act and not every news channel has to only report ever so often as they do on what went wrong (again) in the African continent. How nice it would be to instead see them reporting about the right things being done instead. What a joy it would be to see that visual on our TV screens where we are all taking precautions… where it’s all about progress and programmes, not remorse, retribution and regression.

2,948
Thank you for your comment, we value your opinion and the time you took to write to us!

Tweets by @forbes_india
Prev
Corporate Social Responsibility: Where do companies draw the line?
Next
5 Ways to Save the Physical Retail Store