Ecommerce is not the death knell for conventional retail

While talks of ‘eTailers’ being the end of brick and mortar retailers is doing the rounds, on-ground reality tells a different story

Defying India’s economic slowdown, the ecommerce and omni-channel segments have emerged among the fastest growing in the sector.

Over the past few years, companies like Flipkart (books, music and electronics), Myntra and Jabong (apparel) have grown by leaps and bounds and eaten into the revenues of physical retailers. In fact, the last three years have forced the brick and mortar retailers to go online even as their net store additions slowed down.

The impact is all the more evident in segments where the product specifications are standard and differentiation is low. Other segments, such as apparel, sees ecommerce companies playing heavily on the volumes game by offering flash discounts, conducting recurring shopping festivals, and holding year-round sales.

The above sure paints a very bleak picture for the retailers, but here’s the ground reality – Indian ‘eTail’ market (online shopping for physical goods) accounts for USD 2.3 billion (as of 2013) which less than 1% of overall retail sales.

In spite of this, I hear of this impending doom brick and mortar faces due to the online onslaught whenever I talk to retailers. It’s the same discussion across most of the retail board rooms over the last few quarters, talks of how Amazon and Alibaba have taken over the retail space is often quoted in context.

Keeping the numbers aside, it would be interesting to understand how much of this is really true. After all, Apple still sees almost 400 million in-store visitors and sells more through its brick and mortar stores, compared to its online stores.

The ecommerce evolution: India scenario To understand what’s happening in the ecommerce space, we need to understand how it has evolved globally and what the differences in India are. For instance, if we look closely at the evolution of ecommerce in US and China and compare it with the scenario in India, the story here seems quite different, though not too apparent.

Governments played a key role in the growth of e-commerce in both China and the US. For about a decade, ecommerce players in US did not have to levy sales tax on their products or services. This gave players like Amazon a significant price advantage and helped them establish their business. The same was true for Alibaba, who had no foreign competition to deal with, in China. Getting such a head start meant a significant competitive advantage over brick and mortar stores. The situation in India is quite different. The brick and mortar players have quite a level playing field.

In effect, the ‘eTailers’ abroad did not have to buy customers by offering discounts alone, they got a natural price advantage and consumers were hooked. Most Indian customers, on the other hand, seek value and will pay very little or no premium for convenience. So will customers remain hooked even after discounts are gone in India? Only time will tell.

Retailers in India, often presume that ecommerce companies have a cost advantage over them due to their high rental costs. This is only partly true. The high rental is replaced by high IT, logistics and warehousing costs for online retailers thus, largely negating the cost benefit of not having physical stores. Factor in the additional costs of marketing and promotion, and the picture looks quite different.

Players also need to understand that the success of online players has largely come from product segments like mobiles, consumer electronics, books and music – which are easier to move online due to their standard specifications and minimal differentiation. Not all categories can claim that distinction. Additionally, these categories do not necessarily generate margins and are not sustainable over a long term by themselves. The focus on apparel and other high margin categories by Indian eTailers is a clear proof that online players now want to focus on profitable growth. That said, they are faced with the uphill task of learning the art of design, product development, merchandizing, etc. which traditional apparel players have mastered.

This is where the big opportunity for brick and mortar retail lies. 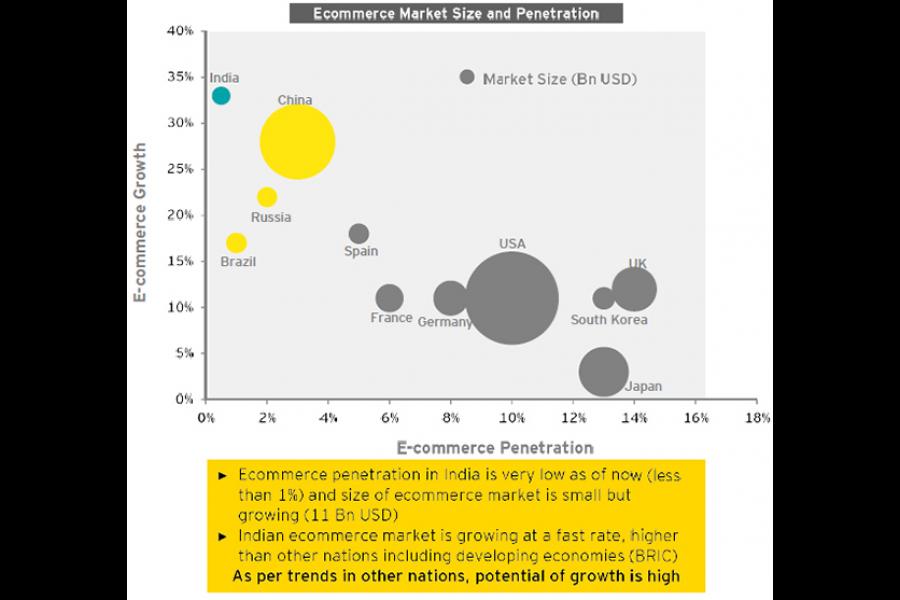 As the graph clearly shows above, traditional retailers have adopted a multi-channel strategy in most developed nations quite successfully. While the proportion is lower in developing nations, it’s growing rapidly and will follow a similar trend.

The message, therefore, is quite clear. While many shoppers are moving online and the trend is non-reversible, it is a huge opportunity for brick and mortar retailers. Online players are creating a buzz and popularising online buying, and brick and mortar players have to ride this wave. This just means having a good omni-channel strategy. In case not leveraged well, they have no one but themselves to blame for missing the bus. Fortunately, they are not too late in the Indian market and have an opportunity to play catch up quickly.

In effect, this is a golden opportunity for the smart retailers to adopt an omni-channel strategy and get a one up on their online competitors in the future. After all, they already own a loyal set of customers and just need to offer one more channel to visit their stores – the virtual.

4,633
Thank you for your comment, we value your opinion and the time you took to write to us!