After picking up 24% in Jet Airways, Hogan is close to buying 49% of Alitalia. Detailing out a three year blueprint to turnaround Jet Airways he said the domestic operations were the major challenge and would need the most change 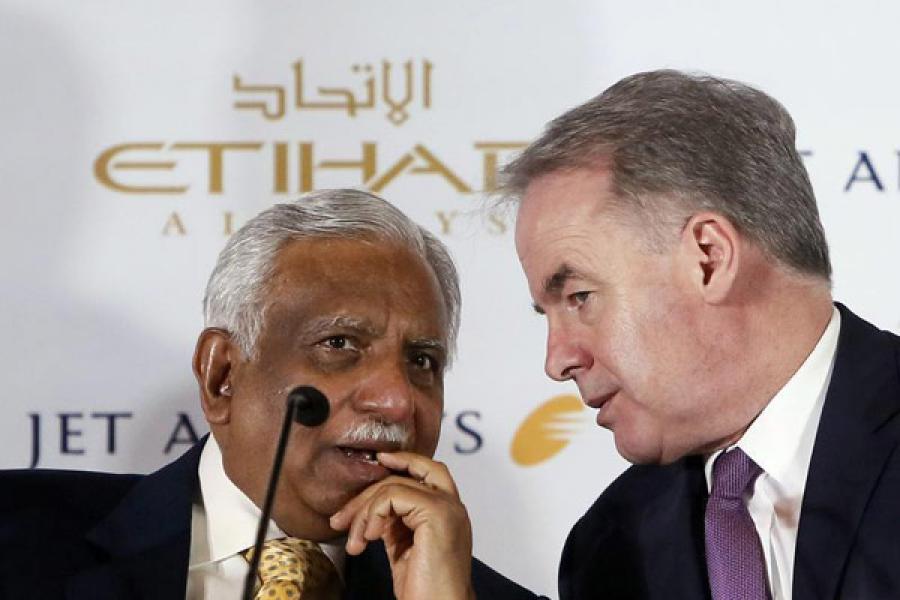 One wonders how anyone can string together a ragtag group of loss-making airlines, to forge a cohesive global grouping that leverages on their strengths. But this is exactly what James Hogan, president and CEO of Etihad Airways has set out to do. After picking up 24% in Jet Airways, which lost Rs 4,100 crore last fiscal, Hogan is close to buying 49% of Alitalia that has the distinction of being one of the world’s perennially loss-making carriers. Alitalia lost about Rs 3,500 crore last year and has been a basket-case for almost a decade.

Money, obviously, is not a problem for Etihad, which is owned by the government of Abu Dhabi. At a press conference in Delhi, Hogan said Etihad has invested close to $750 million in Jet Airways so far. He emphasized that the airline is here for the long-term, and would not shy away from putting in more. Coincidentally, about $750 million is what Etihad has proposed to pump into Alitalia. Over the next four years, this could go up to $1.7 billion to get the airline back on track. Even as they negotiated with the Italians, Hogan and his team have mounted a financial rescue of another European carrier Air Berlin, where it already has a 30% stake. The German airline is struggling with growing competition and in May, Etihad provided a 300 million euro cash-injection in the form of convertible bonds.

Speaking in Delhi on Wednesday, Mr Hogan said, "The equity-alliances are part of a very clear game plan. The plan is to bring more connectivity (for passengers) through organic growth and codeshares." Answering Forbes India’s question on his mandate from Sheikh Hamed Al Nahyan, who is chairman of Etihad Airways board and managing director of the Abu Dhabi Investment board, he said, the only brief was to be profitable. "There is no shopping list from them," he said.

That Hogan is chasing scale is evident by the speed at which the alliance is being expanded. Already there is talk that Philippine Airlines could be the next partner. Etihad ordered 200 aircraft at the Dubai air-show last year, clearly preparing for the fruits of these investments in the form of more traffic for its network. If the Alitalia deal goes through, the group, will be the fifth largest airline grouping in the world, Hogan said. Star Alliance, One World and Skyteam are the three largest airline alliances. The alliances do not have equity linkages.

All the airlines in Etihad’s portfolio are struggling carriers that will feed passengers into Etihad’s long-haul routes. Singling out India from the lot, the Etihad CEO said, "No single market is more important to us than India." With 42 million international passengers, India is a very attractive point of origin and destination for Etihad. Commending the Jet Airways founder and chairman Naresh Goyal, for having built a fabulous brand, he said, the deal wouldn’t have gone through if they didn’t have a great relationship.

One of Etihad’s turnaround champions is Cramer Ball, who is now CEO (designate) at Jet Airways. In his previous job, on secondment to Air Seychelles Ball was able to bring the moribund airline back to profitability. Etihad had bought 40% in Air Seychelles in Jan’ 2012- the stake sale had included management rights.

Detailing out a three year blueprint to turnaround Jet Airways he said the domestic operations were the major challenge and would need the most change. He said, India-Abu Dhabi routes would be the key pillar of the new network strategy. Jet (surplus) aircraft are already being used by Etihad- this fleet sharing would be expanded and could extend to other equity partners. Both Ball and Hogan focused on resource sharing and building more linkages. Analysts are still unsure of whether this can work in a business where cash can burn up faster than fuel. Hogan says Etihad has no exit strategy from India. "There is no tougher business than aviation, but we have the ability to build forward," he said.

7,181
Thank you for your comment, we value your opinion and the time you took to write to us!

Tweets by @forbesindia
Prev
Who will be India's Alibaba, SnapDeal or Flipkart?
Next
The Promise of 100% and Finding Fortune at the Bottom of the Pyramid