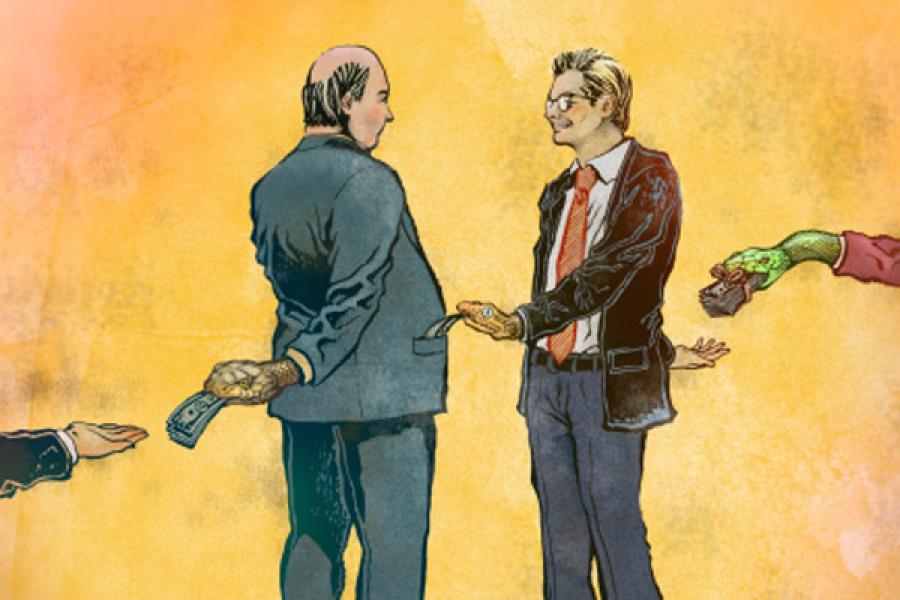 When I was young, admittedly a long time back, I was always told that making mistakes was part of one’s life. What was crucial was learning from the mistakes and moving on. I am wondering if times have changed.

What if the ‘mistakes’ are nothing but carefully created plots designed to benefit a few at the cost of many? What if the perpetrators are highly skilled individuals with cutting-edge technology, armed with reams of information gleaned through incisive research with an intention to defraud till their game is over and they are caught?

Should these be still seen as mistakes? Or human fallibility in a more profound form instead?

Barings (Bank) and its collapse proved that individuals can lie, despicably so and for a long time, and bring down venerable institutions. But the Barclays Libor scandal showed that well-heeled individuals can connive and yet, the institution survives and so do the perpetrators.

Many fines are being levelled against various banks globally, all respected and powerful names. Yet, their executives are all apparently ‘collectively’ blameless and so are their boards. An old adage rewired? United we stand, divided we fall.

Pulling ranks has been the hallmark of corporate tradition, but joining ranks at times of crisis has been the military’s prerogative. We now have a generation of executives, sadly concentrated in the financial sector but by no means restricted to this sector, who believe that it is good to be good but much better to be bad and put it down to ‘lessons learnt’ and move on.

I have been reading with great interest the Libyan Investment Authority’s (LIA’s) fight with Goldman on alleged improprieties. My intuition tells me that they have no chance in hell to prevail upon any judicial system and win this one as the stain of being a Gaddafi-era institution weighs heavily regardless.

As a matter of fact, the London courts have asked the LIA to actually deposit $1.5 million to cover Goldman’s costs upfront in case Goldman wins and needs to recover its costs.

Who is the defendant here? Banks, wealth managers, corporate financiers have thrived on working with corrupt and decadent regimes with no remorse or recall. Now we even have AT&T in the US admitting to incorrect billings and returning large amounts to their subscribers.

Yet, human society can only work on trust and faith. That is why even in strife-torn regions or in the interior hinterlands of the back-end of the civilised world, humans survive, trade happens and property is protected.

In my travels across frontier markets, I see informal, but secure traditions working well. Ordinary things like honesty, keeping one’s word and empathy for the larger community are not signs of greatness, but a given to be human. Agreements, lawyers, regulations, contracts and judges are not needed here. Only sense, fairness and equity prevail.

The ancient law of social contract is what keeps these communities going. All ingrained in us, but conveniently forgotten at the altar of greed, hubris and manipulation in the urban jungle I suppose. This worries me.

If great nations and great institutions, all of whom we look up to and trust implicitly, are going to disappoint us with such sordid and obvious examples of wrongdoing, what chance does progress have?

I read with great relish and in due course with utter disappointment the goings-on at Eco Bank, a highly successful West African Bank and the shenanigans of its CEO, who ultimately had to go. It hurt me to find out that the CEO in question was nobody else, but a senior decision-maker in International Finance Corporation (IFC) who, prior to taking this plum job (he of course tried to put a cherry on top), was actually responsible for the IFC’s investments into the same bank.

I suppose one way of looking at it is what could have been better for the bank than to have a CEO who knew the bank well. Another way to look at is my way… which is simply that ‘some things are not done because they don’t survive the smell test’ and perceptions do become reality.

In the sporting arena, especially with cricket in India, I see the same thing. Ex-cricketers, now having become scribes, refuse to objectively critique the players, the captain, the selectors or the BCCI, lest their lucrative contracts with media companies and publications and of course, invites to prestigious events are lost or taken away.

Power corrupts and absolute power corrupts absolutely. Therein lies the core of the issue. Nobody appears to want to call a spade a spade lest the spade is the one that digs their grave for them to lie in. After all that’s what spades do, don’t they? So why tempt fate?

The more sinister and scary dimension is not merely how the clique actually tries to ward off allegations first and then to admit sheepishly with regulators when proven. It is how the aftermath is managed, usually away from the prying eyes of the media (which moves on to the next scandal).

This is when icons are brought down, but with promises of a ‘not too far away’ restitution awaiting them if they quietly accept their abnormal pay outs and stay silent from spreading the stain further. So, with a small fine paid and a ‘fall’ guy identified to appease the public and the investors, the institution emerges unscathed and the ‘too big to fail’ myth perpetuates. And what about the guy who went away? Usually goes away with a king’s ransom and is then brought back quietly into company boards, private equity funds, etc, ostensibly for their reach and expertise. In some cases, they even become celebrated spearheads of some obscure emerging market business models supported by funding from their old compatriots.

It sickens me to meet failed Western demi-gods and leaders coming into trusting and hungry continents like Africa with large amounts of funding commitment and a pledge to start or invest in businesses, then acknowledged as visionaries.

Surely, they are nothing but economic refugees trying to show interest in a region they barely cared about in the past, knowing their pedigrees will buy them immediate acceptance.

Emerging markets need investors, know-how and skills. But if the manifestation of that from their past masters is going to be through their discards or worse still, their fallen heroes, that begs a question. How does one filter them and wean them out?

How can those fallen icons be prevented from shrugging things off and moving on to their next target? The work by Transparency International and World Bank, among others, to expose corrupt regimes and elevate the awareness and understanding of issues like impact of corruption and the fallouts from incompetent or dictatorial regimes has been groundbreaking. Should we now start a register of names of errant CEOs, traders and institutions and track their movements and name and shame them if needed? How else to ensure that bad practices are neither forgotten nor forgiven easily? How else to ensure that pursuits in foreign lands where regulation and governance is still evolving and levels of sophistication is still primitive is not self-defeating?

Another round of problems and scandals, this time coming from the new world taught by old hands adept in ‘beating’ the system, is not welcome. Can we not avoid it through the introduction of something like CorpPol-the corporate equivalent of the Interpol?

Africa does not need cast-aways to advance. It needs to instead cast its net wide to bring the right people in, including its own diaspora.

3,307
Thank you for your comment, we value your opinion and the time you took to write to us!

Tweets by @forbesindia
Prev
Skill Building through CSR: The Catalyst for ‘Make in India’
Next
The Smart way of Saving Power