Is Formula 1 a sport?

A perspective by Vicky Chandhok, president of the Federation of Motorsports Clubs in India (FMSCI) 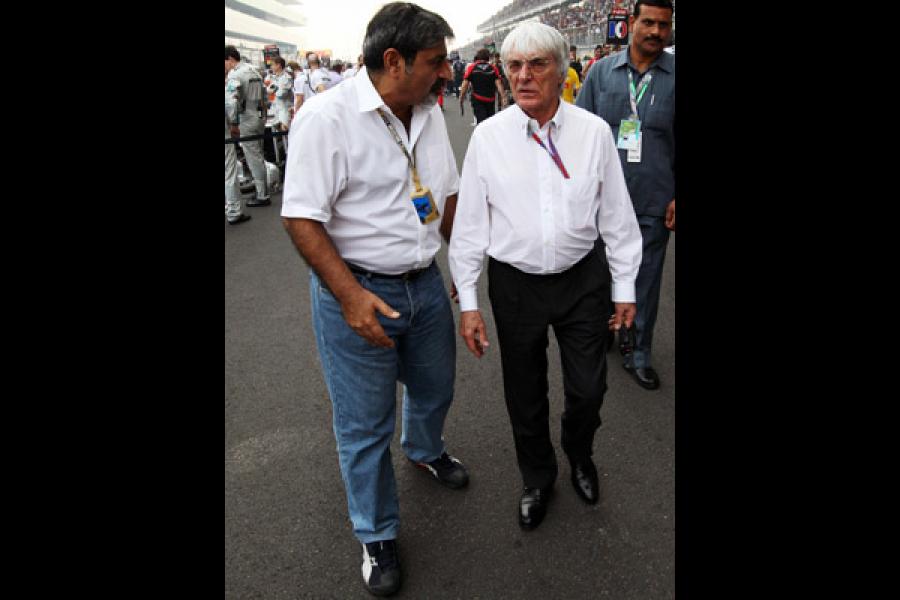 Vicky Chandhok with Bernie Ecclestone at the 2012 Indian GP

The Indian Grand Prix has been dropped from the Formula 1 calendar for 2014. F1 supremo Bernie Ecclestone used two words to describe his pain with the India GP - 'taxes' and 'politics'. Sure one can blame taxes or politics, but at the heart of the F1 controversy is a fundamental question – Is Formula 1 really a sport? Because if the Indian government was to acknowledge it as one, then it would have been like any other sporting event in the country. I spoke with Vicky Chandhok, president of the Federation of Motorsports Clubs in India (FMSCI) to get his perspective on the issue. Here are a few excerpts from that interview.

Is Formula 1 a sport? This question has been raised by many people taking a cue from former sports minister M S Gill, who decided that it was not. Now that can be his personal perception. It is up to him. It is a free world. Fact of the matter is that Formula 1 is a sport and there is no doubt about that in my mind. It is perhaps one of the most hi-tech and riskiest sports in the world, where participants need to make decisions in micro seconds which could either let them live or could kill them. For those that say that motorsport is not a sport, I would like to remind them that the fitness levels of the participants are far superior than many athletes or any sporting disciplines recognized in this country.

A basic question, what defines a sport?
A sport is defined by a result. By competition wherever it may be. I know for a fact and I am taking an example of all the Formula 1 drivers that I know in terms of their fitness regimes. And these guys they cycle 500 km a week, they work out for 3 hours a day, they swim, they do triathlons. Those who claim that it is not a sport have never been in a rally car ever in their life and I would love to have them as our guest any given day.

Since Formula 1 is not considered a sport in India, has taxation become the deal breaker. What’s your perspective on this?
From what I understand, they are trying to tax 1/19th because there are 19 races of which one is in India-- but the strange part is they are taxing 1/19th percent of income and not the profits. Either we encourage the sport or we dump it, and say go to hell. Post what happened with Commonwealth Games, we did a good job of hosting the Formula 1 in India and this is a matter of pride. All over the world, governments fund Formula 1 with the exception of UK and India. They do it because they see value in it from a tourism point of view and a platform to promote their country. Whereas we have found ways to charge all kinds of taxes and make people pay customs duty on import. We are not trying to welcome them, but asking them to get lost.

Today the promoters of Formula 1, the Jaypee Group have been asked to pay Rs 10 crore annually to the National Sports Development Fund. Nothing wrong with that. But why make the motorsport fraternity which is already struggling because of the expensive nature of the sport, why tax them to fund athletics? Sure let’s have this fund but use it back for motorsport so that we can develop our own drivers or for the infrastructure.

Is there a profitable business model for people who invest in Formula 1 circuits?
No Formula 1 circuit in the world will make money. That’s why the government funds it. The circuit itself is not a money making exercise. For instance Malaysia pays $ 66 million in rights fee. But they feel it is worth it because the track helps in increasing the brand equity of Malaysia world wide. But where it is privately funded like in UK or India, let’s make it easy because we are reaping the benefits of Formula 1 in an indirect manner. You take the team Williams. A large part of their inertia systems, flywheel and inertia energy systems are built in Pune. Tata for example provides the CFD technology for Ferrari. You know, you talk to all the taxi companies, taxi drivers and hotels in and around Noida and Greater Noida when Formula 1 happens. They love it because they do more business in those 10 days than they do in many months.

Do you think Formula 1 has long term prospects in India?
I am hoping that it will. I can’t expect the Jaypee Group to privately go on hosting it forever. I am hoping for a miracle with the government coming in.

How significant are the events that unfolded over the last few days?
Formula 1 wanted Jaypee Group to hold the event in March 2014. By hosting it in October 2013 and then to host it four months thereafter is both economically and physically not possible in terms of logistics. So it makes logical sense to push it to March 2015 and extend the contract to 2016. So what Jaypee Group has done is to abandon 2014 completely but maintain the contract for five races.

16,745
Thank you for your comment, we value your opinion and the time you took to write to us!