T2 is a fantastic new edifice that is certain to be an icon for the city in the days to come. One of the eye-catching features of the building is a 69 feet high flagpole with a huge Indian flag fluttering on it. 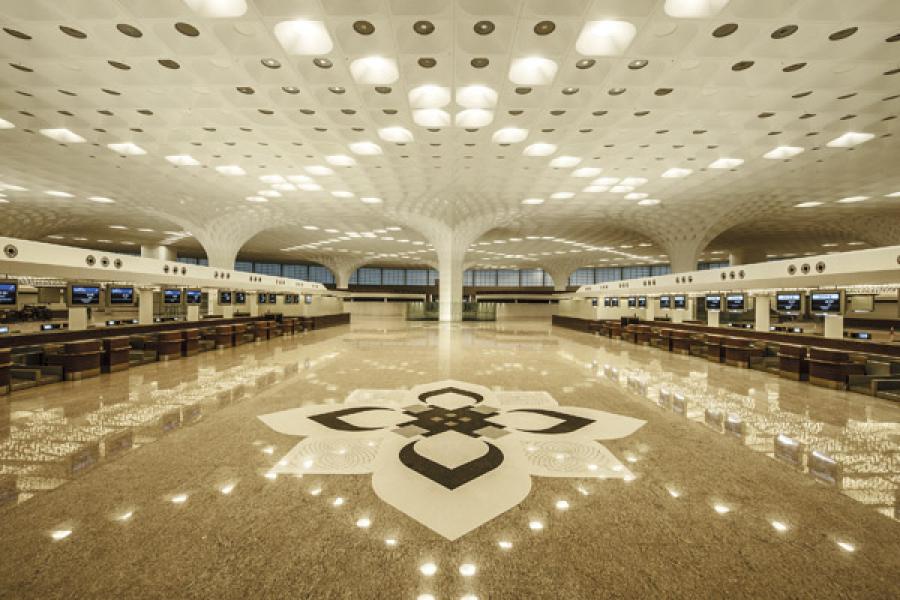 The new and extraordinary Mumbai airport Terminal two is ready for business. The Prime minister will inaugurate the building on Friday and the first international passengers will start arriving there on a subsequent Wednesday. The date is still not certain because last minute clearances are still to come, but the transition will most likely be on a Wednesday afternoon, when traffic at the airport is at its lowest. The two old terminals at Sahar that were built by AAI in phases over four decades, will then be demolished.

The Rs 12,500 crore exercise of rebuilding Mumbai airport actually began way back in 2008. GVK vice-chairman Sanjay Reddy is managing director MIAL (Mumbai International Airport Ltd), the company that runs the airport, has driven it night and day. The new terminal is about 40% of this cost, the other big changes are not even visible to passengers. These are on the air-side, where aircraft take off and land. In the past five years, MIAL has re-laid the two runways, built new taxiways, re-routed the Mithi river that flows within the airport boundries and re-built dozens of buildings in the airport complex. The airport company worked more like a demolition squad pulling down over 65 million square feet of old, inefficient buildings in the 2,000 acre airport complex; often replacing them with more efficient new ones. All this, while the airport was operating in full swing. The constraints were many. 4 lakh people live in the slums within the airport perimeter. The slums occupy 300 acres of land- MIAL has been unable to wrestle back any of it. ``It was a bit like conducting a surgery on a marathon runner, while the race was on,’’ says Reddy. MIAL effectively had control of only 1400 acres. The only option was to build a vertical terminal, instead of a sprawling structures at Delhi, Dubai and elsewhere the world. Starting next year, the domestic terminal at Santa Cruz will shut down and the new T2 will be the integrated terminal.  Level 3 of the terminal will be for domestic arrivals, Level 4 for international departures and Level 2 for all arrivals. The gates are interchangeable, or `swing gates’, so domestic gates can be used at night for international and vice-versa.

For all its beauty and the splendid art collection in T2, there is an irony about the opening of the new terminal. In many ways, it marks the decline of Mumbai as a hub for civil aviation in India. For close to a century, since JRD Tata first flew into Juhu airfield, Mumbai has been at the heart of commercial aviation. It was the biggest airport, maximum number of passengers transited through it and all the big airlines were based here.  All this has ended. Hemmed in by a growing city and a tremendous shortage of vision, Mumbai has lost the lead.

Two new airlines planning to start this year, Tata-SIA and AirAsia India, have opted to be based in Delhi and Chennai respectively. While AirAsia’s model is based on flights to smaller cities, the Tata-SIA venture needs a hub where it can expand to build a global-scale international airline. Mumbai could have been an excellent choice, but is sadly too constrained.  The airport currently will handle 33 million passengers this year, but has to constantly refuse airline requests to add more flights. Slots during peak hours are impossible to get, parking is impossible to find. The story is worse for corporate jets, MROs and other airport users. Fees have been hiked repeatedly making Mumbai airport least desirable. Those that continue to be here, only do so because of the city’s importance as the commercial capital.

The airport is code F compatible, and T2 can take large planes like the A380. Air-traffic in India is on the cusp of massive growth, and it is not long before millions more start using airlines instead of traveling by alternate means. Does MIAL have what it takes to accommodate this growth? Sadly not. Even after this re-development, the airport ceiling is 40 million passengers. Progress on the new airport at Navi Mumbai is painfully slow.

T2 is a fantastic new edifice that is certain to be an icon for the city in the days to come. One of the eye-catching features of the building is a 69 feet high flagpole with a huge Indian flag fluttering on it. The spotlight tricolour is sure to bring a surge of pride to every Indian that sees it, particularly as you drive up to it at night. A pity, that we still haven't been able to build for the future.

13,220
Thank you for your comment, we value your opinion and the time you took to write to us!

Tweets by @forbesindia
Prev
How Hotelier Patu Keswani turned a 'Ballistic Expert'
Next
South Sudan: What it Means