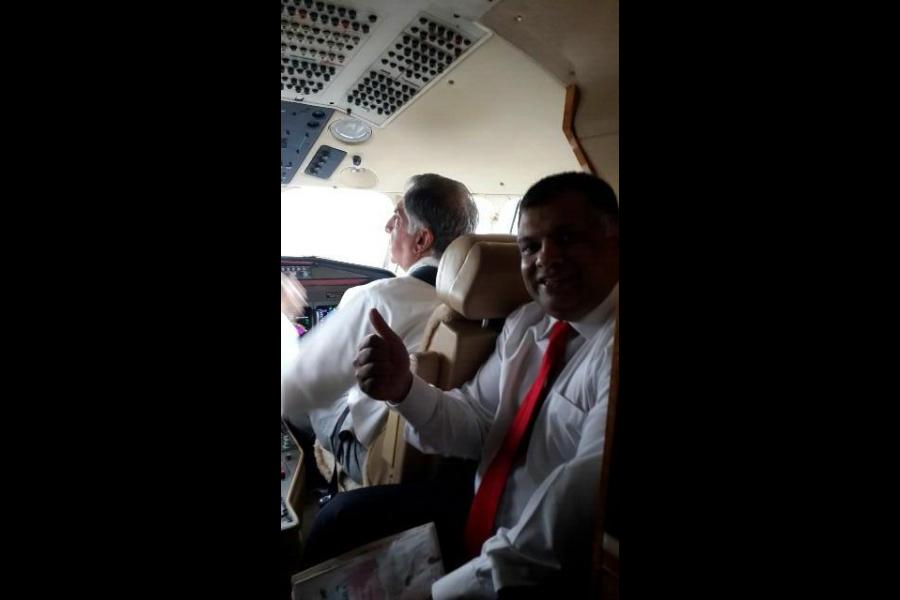 Though not a formal part of AirAsia India’s management, the chairman-emeritus of the Tata group Ratan Tata is obviously a very integral part of the venture. The 76-year-old flew AirAsia founder Tony Fernandes, his partner Dato Kamarudin and the new AirAsia India CEO Mittu Chandilya to Delhi on his business jet on Tuesday. He also accompanied the team to meet with the minister for civil aviation Ajit Singh and other senior ministers.

Mr Tata had a choice between two Falcon 2000s and a P180 Avanti, all owned by Taj Air, that he flies frequently, to ferry the team. Joking about the trip, Fernandes said his business partner, the low key deputy chief executive of AirAsia, Kamarudin Meranun, was scared of getting on the flight. `` But Mr Tata let it be known that he has recently finished his recurrent training.’’ The AirAsia executives had met with senior Tata group officials and Cyrus Mistry at Bombay House on Monday.

Speaking fondly of his relationship with Mr Tata, the charismatic entrepreneur Fernandes said, "We’ve known each other only briefly, yet we are like friends now."’ The former TCS chairman S Ramadorai is the AirAsia India chairman, but Mr Tata is the sounding board for ideas and strategies that are still evolving. The Tata group has a 30% stake in the airline company, without any operational responsibility. AirAisa Bhd has 49%, and Delhi Telestra Tradeplace have the remaining 21%.

Coming Together In an informal chat with Forbes India, Mr Fernandes spoke of how he roped in Mr.Tata into the venture. Their first interaction was about seven years ago when he was dreaming about building cars. "I wanted JLR as a partner and I wrote to him asking if we could meet." Mr Tata had responded and the two spoke of possibilities. They could never reach an understanding. "We started talking about planes, and I said one day there might be an AirAsia India- this was six/seven years ago. But I knew India was closed, and it was no use thinking about it," he says.

The auto-tie up with Tata Motors never got off the ground. Fernandes, continued with his dream, and has formed a joint venture with European car-maker Renault to build a sports utility vehicle for the mass market.

In October last year, Fernandes was in Delhi for a meeting with the Airports Authority of India and saw a framed picture of JRD Tata on the wall. The picture also had a copy of JRD’s flying licence, and Fernandes texted Mr Tata to tell him about it. After a short conversation, the two decided to meet up. The Indian government had liberalised rules for foreign investments in airlines, and Ratan Tata had always been keen on starting one. He flew over to Singapore to meet with Fernandes.

It was at the Shangri-La hotel in Singapore that Mr Tata decided to take the plunge into the LCC business with Fernandes. Things moved quickly thereafter, he says. At Bombay House, the transition was already in the progress. The reins of of the $100bn Tata group were being handed to Cyrus Mistry. The AirAsia team came over to make a presentation to the Tata board. The board approved the deal and AirAsia India was born.

7,432
Thank you for your comment, we value your opinion and the time you took to write to us!

Tweets by @forbesindia
Prev
Innovation: Listening to the Market
Next
A startup tries to make 'Giving' cool