The Datsun Go is here. Now begins the tough part

Nissan is extremely ambitious with its India target. They want to take their 1.3 percent market share (right now) to 10 percent by 2016 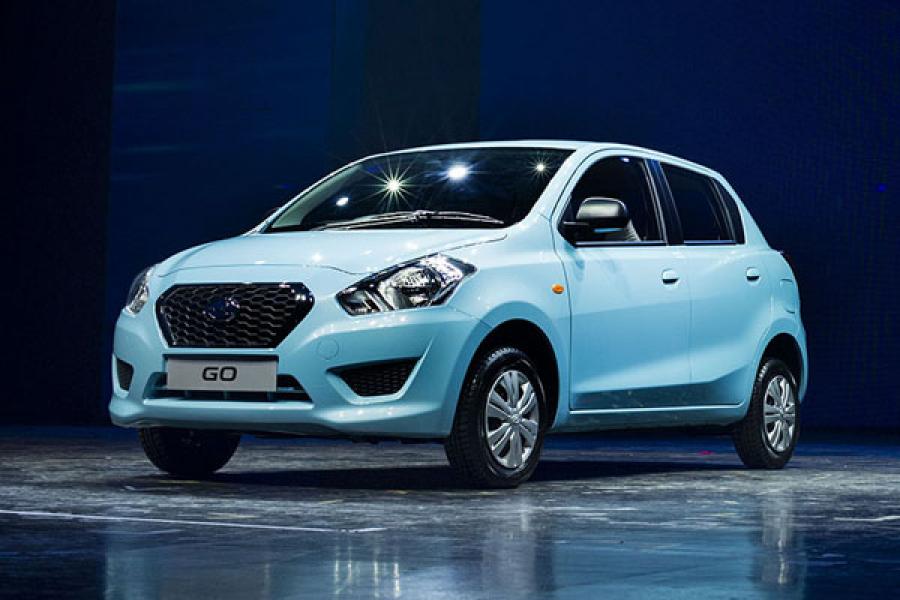 A five door hatchback, the car will have a 1.2 liter engine paired with a manual transmission. (Photo : Amit Verma)

Every idea has an expectation at its core. The return of the Datsun is no different. Nissan expects that cars from the Datsun stable will give the company big volumes in the high growth markets of the world. Almost four years after this idea was first conceived, yesterday in a first global preview, Nissan showcased the Datsun Go in New Delhi.

Let’s talk about the product first. It is a five door hatchback. Carlos Ghosn, the CEO of Renault-Nissan Alliance said it will be launched in India in early 2014 at a price of under Rs. 4,00,000. Early 2014 means March 2014. “Like the original DAT go car, the new Datsun Go will allow the driver to go anywhere,” said Ghosn. The car will have a 1.2 liter engine paired with a manual transmission. “In addition the car will be available with a mobile docking station, a practical solution that will allow owners to connect their smart phones and personal music libraries to the car’s audio system,” he added. The car will be available in six colours.

Nissan plans to launch three products with the The Datsun brand by 2016. Nissan executives did hint that there could be a car below the price point of Datsun Go - one that is clearly aimed at the Maruti Alto segment. In terms of product attributes, what I gathered from my meetings with Nissan executives is that the pecking order of what the car should achieve is – interior roominess, number of people you can put, good visibility, nice acceleration with good fuel economy and good braking performance.

What is the magic number in terms of fuel economy? Vincent Cobee, head of the Datsun project says it is 20 kmpl. Will the Datsun Go get there? “I hope. The tension between acceleration and fuel economy is interesting. In Indian driving conditions…you don’t want to compromise on either. One way around this is weight. In order to improve on weight, the good trick we have is that we started on brand new development. I am not bringing in weight which the Japanese regulations stipulate a car needs to be. We will substantially improve on if you want to look at on weight per square meter,” he said.

On the business strategy bit, it is pretty clear that Nissan is targeting the mass market segment in high growth markets like India, Indonesia, Russia and South Africa. Like most of his speeches, this time too Ghosn used statistics to make his point. “By 2016, we expect 50 percent of all auto sales to take place in high growth markets. To put the global markets in perspective, in the United States there are about 800 cars per 1, 000 residents, among mature European markets it is around 500, in Russia the rate of ownership is 280, in South Africa it is 160, in Indonesia it is 70 and in India it is 15. We see significant opportunity in these growth markets where demand for cars is increasing and will continue to increase,” he said. Ghosn added that by 2016, Nissan will launch 10 new models in India which includes the ones from the Datsun line up.

Nissan is extremely ambitious with its India target. They want to take their 1.3 percent market share (right now) to 10 percent by 2016. Ghosn added that the Datsun brand will contribute significantly to this growth. How much is significant? Almost 50 percent of the total volumes.

On 14th July, a day before the event, I spent some time with Vincent Cobee, head of the Datsun project. And he made an interesting point about the global unveiling of the car. “I am optimistic, excited and challenged about how to bring the Datsun to market and secure it. But that is not for tomorrow. Tomorrow is just one big step which we need to get right. It is a communication event,” he said. It has gone well. In my view, the car looks good. But it enters a crowded category where there are several competitors already. There’s Maruti Suzuki with the Wagon R, Ritz, A Star and Hyundai with the Santro and the i10. The challenge in the next eight months for Nissan is to ensure that the implementation of its product strategy goes right. And finally customers, the first time buyers Nissan has in mind for the Datsun, end up buying the vehicle.

“In each country, for each product you need to get at least 20 things right. We have to make sure that we don’t under estimate that my target customer in a Tier III city of India might be put off because the acceptance ratio of the financing option is not good. That the way I price my spare parts or distribute it might be a make or break for my strategy. I need to get those 20 things right. Two years ago, it was about getting the right product with the right styling. I think I am there,” he added.

Gupta explains this with the help of an example. “You know Vasant Vihar in Delhi. How do you think I will be able to sell a Datsun if I open a showroom in C Block Market? Even if we will find investors to invest in Vasant Vihar. Now if I go to East Delhi…people near the Ghaziabad border who are traveling to Noida or Nehru Place. What is the probability? It is more. So the point is we have to be where our customers are. It is very difficult. But let’s try. If you don’t do nothing, you have nothing,” adds Gupta.

P.S: Read our cover story on the launch of Datsun Go

14,062
Thank you for your comment, we value your opinion and the time you took to write to us!