How can India's rural communities get online and get going?

As remote work and education takes fore, India's glaring digital divide could soon become an economic divide, Covid-19 or not

Udita Chaturvedi and Vani Kapoor are from the 10to19 Dasra Adolescents Collaborative. 10to19 is a high-impact platform that unites social organisations, funders, technical experts and the government to empower and positively impact the lives of millions of adolescents. 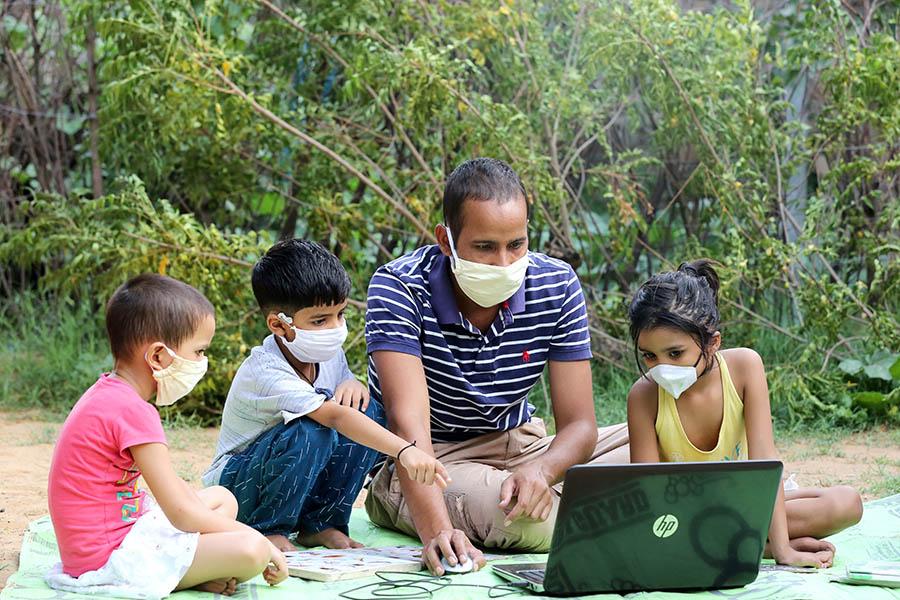 'Stay at home!' has been the most dominant and widespread message to the world ever since the outbreak of Covid-19. In this period, when more than a fifth of the world is locked in their houses, the Internet has come to the rescue like nobody had imagined. As large sizes of population continue to take the Internet for granted as they work from home, there are millions of Indians that are still living without any seamless access to the Internet.

“On one hand, there has been a reverse migration as daily wage labourers are returning to their native places, on the other hand there has been significant migration to virtual platforms for many services and products,” says Amitav Nath, Quest Alliance, talking about the paradoxes in India where the Internet is an omnipresent necessity for some and a luxury for many more.

Financial institutions have started to transition to remote services, local grocery stores are opting for cashless transactions, health care providers have pivoted to telemedicine and educational institutions have reset their pedagogical techniques to turn Zoom calls into classrooms. Meanwhile, the marginalised are being pushed further into marginalisation in the absence of seamless access to the Internet and digital literacy.

According to UNESCO, a little over one in every two households (55 percent) have a steady internet connection, globally. India is still far from bridging this divide. While the country takes pride in its one billion+ SIM cards, less than 40 per cent of the population has access to seamless Internet. According to the latest GSMA report titled 'Connected Women: The Mobile Gender Gap Report 2020', there is a 20 percent gender gap between male and female mobile owners in India and an even wider 50 percent gender gap when it comes to mobile Internet users.

Like every other sector, education too has taken a big blow. In India, 320 million students have been affected by COVID-19 school closures, and though the country is quickly pivoting to online classes and e-learning, we are leaving behind a vast majority of the population.

In several households, especially in rural India, girls and women do not have access to personal mobile phones; and young boys don’t have the financial capacity to buy data packs that would help them access online learning material. Most rural schools don’t even have digital infrastructure for learning and teaching purposes; teachers’ capacities are not built to deliver online lessons. And then there is the issue of English language dominating the Internet, creating a further divide between information and information seeker.

While there is no doubt that the pandemic hit fast and hard, not leaving enough time for teachers and students to adjust and adapt to the new normal, urban populations had the resources to adopt and adapt quickly. Students in rural and semi-urban areas did not have the same privileges.

In India, the challenge to overcome the digital divide is two-fold, i.e. access and the capability to leverage infrastructure in terms of digital literacy, for people to fully use the Internet in all aspects of their life. These challenges are further marred by other infrastructural challenges. Around 16 crore rural households in India do not have access to computers, according to review report of National Digital Literacy Mission (NDLM). Among the 20 percent of the poorest households in India, only 2.7 percent have access to a computer and 8.9 percent to internet connectivity. And the Telecom Regulatory Authority of India (TRAI) estimated only half of India’s population has access to quality Internet (around 115 wireless subscribers, and only 66 crore have access to broadband quality internet).

According to Mission Antyodaya, a nationwide survey of villages conducted by the Ministry of Rural Development in 2017-18, 16 percent of India’s households received one to eight hours of electricity daily and less than 50 percent households received electricity for more than 12 hours a day. So how does India expect its rural communities, which is about 67 percent of the country’s population, to get online and get going?

It is often said that crisis is the mother of innovation and creativity, and the pandemic has indeed turned out to the enabler of innovation required to overcome the digital divide. It reinforces the importance of recognising Internet access as an indispensable part of human life post-COVID. The urgency created by the pandemic offers valuable lessons and offers a unique opportunity to pivot, reimagine and reinvent the wheel.

The world we will enter post-Covid is uncertain, but one thing is for sure, that the new world will be inaccessible without being digitally connected. Thus, in no time will the digital divide turn into an economic one for the masses. The required infrastructure and connectivity must reach the remotest and poorest societies. Access to technology and the Internet should no longer be a luxury, but a right as basic as food, clothing and shelter.

At this crossroads, fuelled by the emergency created by Covid-19, India can bridge the digital divide by innovating on delivery models for education and collaborating with stakeholders to come up with cost-effective solutions for prototypes to test at scale. India has an urgent need to ensure that students are not left behind, Covid-19 or not. This requires effective governance to build quality infrastructure across the country, revamped education system to include digital literacy as a key component in learning, contemporary skills and capacity building of teachers to deliver online lessons and homegrown content in vernacular languages to reach to the masses. India’s best bet to bridge its digital divide and create solutions at scale is to leverage technology as an enabler.

Udita Chaturvedi and Vani Kapoor work for the 10to19 Dasra Adolescents Collaborative. 10to19 is a high-impact platform that unites social organisations, funders, technical experts and the government to empower and positively impact the lives of millions of adolescents

1,963
Thank you for your comment, we value your opinion and the time you took to write to us!

Tweets by @forbes_india
Prev
Leadership counts when there is a truckload of uncertainty
Next
Covid-19: Leveraging tech to improve affordable healthcare access