A fire started, people died, and it didn't seem to matter

This tragedy is a recurring reality in the country I grew up in, and though I no longer live here, I do owe so much to it...

I want to share this story. It was a timely reminder for me, of what the reality is in the country I grew up in, and though I no longer live here, I do owe so much to it.

I have been in Mumbai for a week now. The morning newspaper, one of many that ensure India has the highest per-capita circulation of newsprint in the world, had a cover story on the Canada Pension Plan investing $250 million in a new $500 million company that would fund real estate development in India. The story that I am sharing below however barely had a mention in the print edition, or online.

A fire started late in the morning on Thursday, a few minutes away from our family home in the Colaba and Cuffe Parade area. Like most of Mumbai, apartments for the middle class and "up", jostle for space with swathes of slums. In the picture below, the fine-grained texture of the nearby slums is quite visible beside the apartment buildings in their sea of trees. 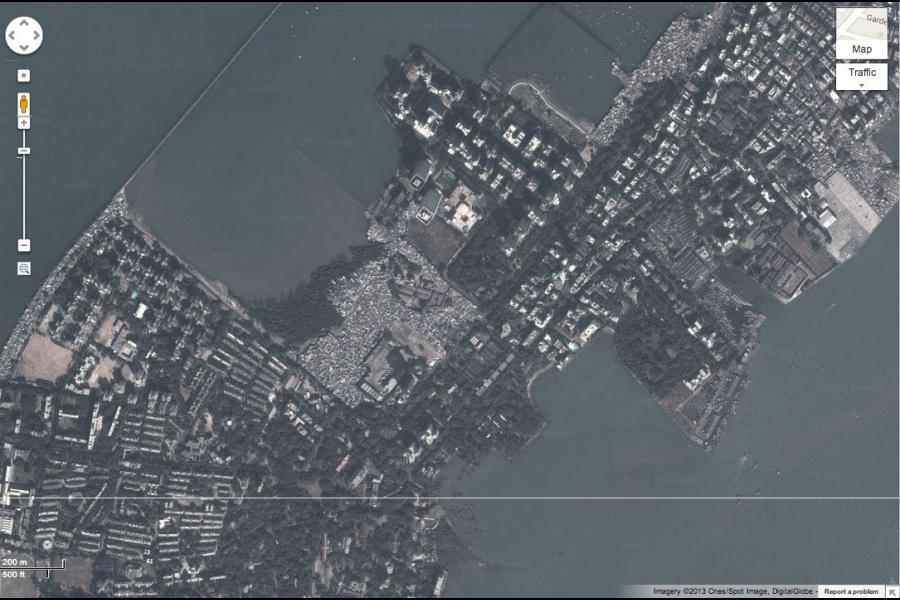 Apartment buildings for the affluent in their sea of trees jostle for space with swathes of slums. Colaba and Cuffe Parade area. (Source: Google Maps)

These slums supply all our homes with helpers, workers and services that the City will not acknowledge exist. They are also home to caregivers and "servants" that have and still do work for people like "us". They're family for us, and I've known many of them since I was a child.

When the news started to spread, there was utter panic. Residents in high-rise buildings beside it saw it first, and millions of text messages charged the air in this cellphone savvy city. My brother got in the car with the helpers who were at home and drove into the slums to help them pack their valuables into the car. They brought their things to our home for safekeeping. Many others like him left their flats and apartments to go and help, a state of cohabitation described beautifully by a word I learned earlier this year-- "convivence". The fire blazes through the slums on Cuffe Parade (Image Courtesy: @nonitakalra on twitter)

The fire spread quickly, but was extinguished quickly too. People hauled gas cylinders out of their shanties to prevent a daisy-chain sequence of explosions. The mafia that control these areas of the city deliver far better services than the municipality can. The fire brigade made an appearance too. Still, hundreds of thousands of people fled. The public school kept the kids back an hour to keep them safe. Till late at night, the street outside our building was a river of tens of thousands of people returning to their homes.

The huts and shanties that the the bais, babus and driver who work for my parents call home are fine, as are their families. Others weren't as lucky. Shocking stories emerged of the more affluent buildings closing and locking their gates to prevent [poor] people from coming in to take shelter. This morning I heard stories from the mouths of those that live in the slums, of bodies still being found in burned plastic tarp, and over forty kids who were too young to be at school, perishing. Though anecdotal, there is no doubt that the death toll has been significant.

The few mainstream media outlets that did bother to cover this story, made passing mention of just one person dying and got the location and name of the slum wrong, placing it several hours north of where it actually is.

While the haves revel in their ostentatious displays of wealth, and the Canada Pension Plan's decision to find higher returns is celebrated, there is little space in what is the "new India" to acknowledge the silent majority in this city, let alone grieve for their loss.

One of many rumours circulating has it that a real estate developer started the fire, in an attempt to gain control of the land. That isn't unusual in the battle for the valuable real estate that these slums occupy. If it is true, then maybe a well-intentioned international pension fund will lend this builder the money to build more homes for the wealthy on those ashes. Wouldn't that be sweet?

6,254
Thank you for your comment, we value your opinion and the time you took to write to us!