The bad loans problem, if left uncontrolled, can lead to a systemic failure in the banking system 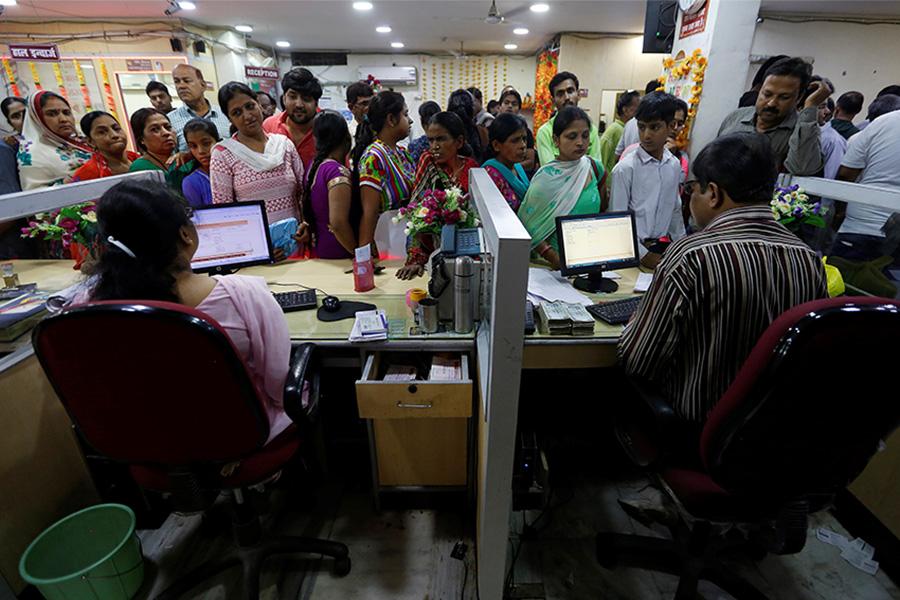 People stand in a queue to deposit 500 and 1000 Indian rupee banknotes inside a bank in the northern city of Kanpur, India, November 10, 2016. Adnan Abidi/ REUTERS - D1BEUMAGAJAB

India needed a strong stimulus to revive the descent of its growth momentum. And it came in the form of a bank recapitalisation measure. The Rs 2.11 lakh crore stimulus for public sector banks is laudable as any risk in the banking system, if left uncontrolled, can bring about systemic failures in the financial sector. This type of initiative has been seen and experienced in various countries and in India as well, in the past. The triple balance sheet problem, i.e. the balance sheets of bank, corporates and the government, has the potential to derail any meaningful recovery process in the economy. In fact, investment and credit growth has already slowed down significantly given lower capacity utilisation rate and bankers' rising risk aversion due to non-performing assets (NPAs). In accordance to the government’s approach of the '4 Rs' - Recognition, Recapitalisation, Resolution, and Reform - to overcome the twin balance sheet problem of over-leveraged companies and banks with stressed assets, the much-needed measure was announced.

Was it required and is it sufficient? Gross NPAs (GNPAs) of 21 public sector banks (PSBs) - 70 percent of India’s banking assets - account for 88 percent of the total GNPAs (FY16). Since 2015, not only has the percentage of troubled assets gone up, the provisioning for expected losses has also grown substantially. This has led to a dent in bank lending and in turn, investment and growth. In addition, the banks also need capital to meet the Basel III norms. Estimates by various research and rating agencies point out that the capital required by the banks is far in excess to what the government has announced for troubled loans and to meet the Basel III requirements. Further, the Indradhanush plan introduced in 2015 estimated that PSBs would require Rs 1.8 trillion by FY19.

It is to be noted that the government has been recapitalising PSU banks since FY09 through budgetary provisions. The current announcement of Rs 2.11 trillion is a timely addition and is nearly double the amount already injected by the government in PSBs during the period FY09 to FY17.

Will it help the banking sector?

A weak balance sheet thanks to huge bad loans and higher provisioning might be a hindrance for banks to raise funds from the open market. Direct allocation of funds through budgetary provisions also has an impact on the fiscal deficit target of the government. Considering that not all PSUs will be able to raise capital from the markets, the recapitalisation will definitely provide the much-needed funds to the PSBs to manage their risk and credit capital-related requirements and cater to the demand for loans.

While it is expected that bank credit growth which had plummeted to multi-year lows will get traction, any tangible growth in credit will materialise only after the balance sheet of the banks have been strengthened. Moreover, private demand for credit has to recover for credit growth to accelerate. The downturn in the investment cycle holds back the demand for credit at this juncture. While there have been no clear details from the government about how this recapitalisation will work, references by various independent research agencies/ companies draw a parallel to the recapitalisation move of the 1990s, wherein banks had financed the recap bonds issued by the government and the money raised by the government was used to subscribe to banks’ rights issues.

The Possible Impact
A direct bailout of the PSUs would have flouted the fiscal deficit target, calling for a credit downgrade from the rating agencies, and sending a signal to the world about India's commitment to fiscal consolidation.

The combination of recapitalisation bonds, budgetary provisions and diluting government equity in PSU banks appears to be a bankable solution. However, since the fine print of the scheme has not been announced yet i.e. the structure, issuances and pricing of the bonds and mechanism to raise the remaining cash, the actual impact on the bond market, interest rates and liquidity scenario cannot be gauged in numbers. If the banks resort to the excess liquidity parked with them, it may impact demand from the bank and push up bond yields.

The International Monetary Fund (IMF) calls such a bond issue 'below the line' financing, and does not add to the fiscal deficit. To the extent that it mobilises credit flow in the productive sectors, this measure will be considered credit positive. Nonetheless, the annual interest payments have to be made from the budget every year, which will push the fiscal deficit levels higher. According to one government representative, the annual interest payments will amount to Rs 80-90 billion for issuance of recapitalisation bonds. It should also be noted that while the central government has managed to contain its fiscal deficit over the last few years, the combined fiscal deficit of the Centre and states has hovered around 7 percent in the past few years. The fiscal deficit has been contained to an extent, on the back of low crude oil prices. The tide is changing, though, in oil prices, and with that the current account balance has widened, which will exert pressure on the fiscal deficit levels.

However, while the impact on the fiscal deficit currently is not considered to be large enough to trigger a concern, it will definitely add to the debt burden of the government. However, the measures to help banks will be incomplete without other strong initiatives to transform the way they operate to ensure prevention for bail outs in the future. The fact that the capital infusion will be accompanied by reforms for PSUs is assuring and asserts the government's intent to hold the reins.

Is it the right time to consider consolidation of banks?
Consolidation of PSUs banks to make them competitive domestically and internationally was on the cards for quite some time and might be an agreeable solution now. Nonetheless, the stake of the government should be brought down considerably in these banks so that they can operate in a flexible manner with an overhaul in the governance structure with an independent board and competitive approach. In the end, it is very crucial to ensure that a clear message is sent out to the banks that the government is not available to rescue them every time their loan book goes-off beam.

3,924
Thank you for your comment, we value your opinion and the time you took to write to us!