Bhote Koshi River: The power of choice between life and death

What will the future hold for Bhote Koshi river? 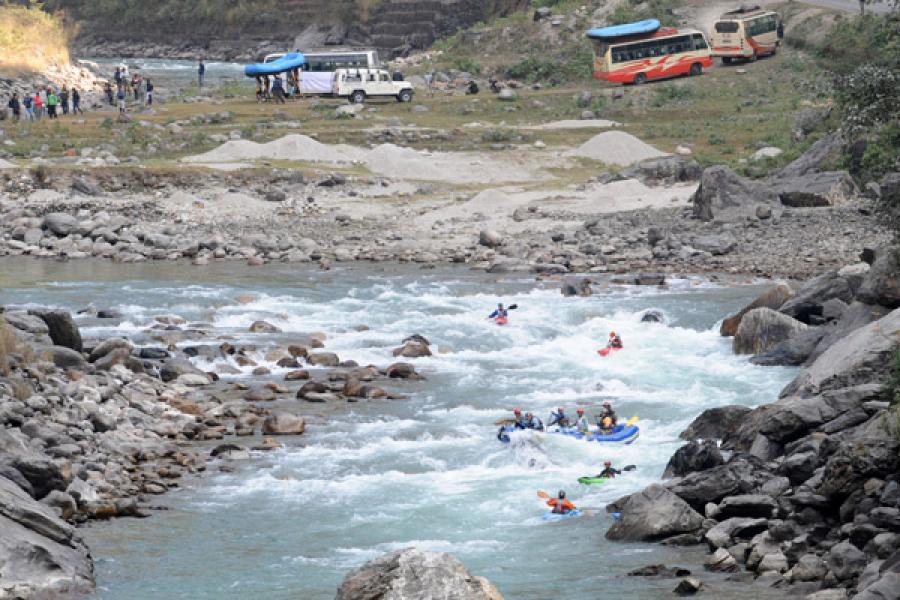 White water rafting and kayaking are popular on this river (Image: Prakash Mathema)

Exactly a month ago to this date, I returned from Nepal, where I had attended a workshop for South Asian Journalists on Climate Change and the Environment.

It was my first time to Nepal, so I was curious to see what the country was like especially since it had a population slightly higher than my city, Bangalore. The country, when compared to India, does seem to be stuck in a time warp --just by appearance with really old buildings and its third-hand Maruti 800s roaming around as taxis. However, after spending a week there, it births a lingering hunger and thirst to be in nature’s presence. This hunger sets in when you land in Nepal and all you see are the mountains.

I was part of a group of 24 journalists who took time out from our schedules to learn more about climate change and environment reporting. It made me remember those miserable geography classes where nothing really entered my head. Let’s face it, practicals were always more fun than theory. Unfortunately, I was part of the old education system that just showed you pictures from a textbook.

While sitting through the lectures on climate change, how ice is melting in the Himalayas and its effect on the South Asian region, somewhere in between I got lost; until we went on our field trip.

On the trip, we visited the Bhote Koshi river. It is a beautiful place where the water is slightly green due to the copper sulphate from the glaciers. One of the things that the river can boast of is that it has hosted global white water rafting competitions.

That thrill for adventure sport enthusiasts is threatened today and may soon die.

The river is seeing the emergence of power plants in the area. Our field trip was a visit to the oldest one in the area, the Bhote Koshi Power Plant, which has been around for 17 years. Almost four more are planned on the Bhote Koshi river.

When you look at the power generated by the existing Bhote Koshi power plant, it may seem puny at 45 MW at peak capacity. The largest power plant in the world is a hyrdo electric power plant in China at the Three Gorges Dam that generates 22,500 MW. The Bhote Koshi Power Plant almost always generates 36 MW for Kathmandu city of its installed capacity.

Here is where the problem comes, says Megh Ale, founder and President, Nepal River Conservation Trust, “Power shortage in this country is very true,” [Nepal has power cuts for eight to ten hours a day. “[However], we have 6,000 rivers and riverlets and a potential of more than 83,000MW that we can exploit.”

Ale makes three points and says, “Our question is we do not have another Bhote Koshi, but power generation can be done in any of the rivers.” The Bhote Koshi river is ideal for its locations, which is a 3-4 hour drive from Kathmandu city, which makes it close to the airport for nature enthusiasts. It is also 16 km away from the Chinese border.

Second, he says, “In Dubai, they have spent more than a billion dollars to build an artificial white water course. In Nepal, it’s the gift of nature.”

His final point is what shows the true conflict: “Even if we generate electricity from hydroelectric plants, it won’t resolve the problem immediately. [Since they are currently under construction,] by the time they generate electricity, in six to seven years,  the problem of load shedding will be resolved as the other hydro electric plants currently under construction have an installed capacity of more than 125 MW. This will resolve the problem. But on one hand you lose a world class river, and on the other we will lose load shedding.”

Sources, however, say that Ale’s fight may well be lost. “How do you fight with someone who does not have power for eight hours a day, and cannot live a normal life,” says one source who spoke to me off-the-record.

The conflict has been taken to the Supreme Court in Nepal, and the fate of the river lies in the hand of the court’s ruling.

To me, the Bhote Koshi river symbolized the realistic fight of climate change and the environment, and this is the first blog in a series in the run up to World Environment Day on such issues.

5,099
Thank you for your comment, we value your opinion and the time you took to write to us!

Tweets by @forbesindia
Prev
Chinese Premier visits India. So?
Next
The Importance of Parks and Public Space