Fear and Loathing in Cyprus

Panayiotis Onisiforou returned to Cyprus from London in 2002 and found an idyllic life but a decade on, things have changed for average Cypriots

Betrayal. Shock. Anger. Those were the emotions that Panayiotis Onisiforou and his family felt when the government announced their bank accounts would be frozen over the long weekend in late March. The 27 year old owns and runs a small bakery with his wife in Cyprus’ third largest city, Larnaca, on the south of the island. The recent government plans for generating funds from depositors' savings led to widespread panic across Cyprus and indeed Europe. While much of the global media focus has been on wealthy foreign investors, the economic upheaval that Cyprus (and his city in particular) has seen is a time for uncertainty, resentment and soul-searching for average Cypriots. 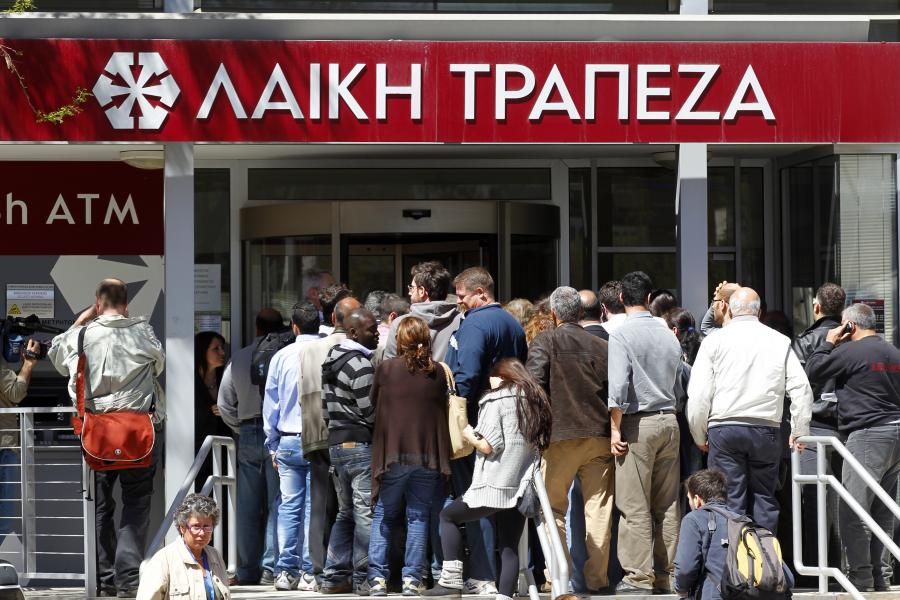 Depositors queue up outside Laiki Bank as withdrawals were limited to €300 or Rs. 20,813 per day. Image Courtesy: Bogdan Cristel / Reuters

He was one of the huge Greek-Cypriot contingent in London and one summer when visiting his grandparents’ family home in Cyprus, couldn't leave the Mediterranean island. “It’s a laid-back lifestyle where people don’t bother you. The weather is great and the people are friendly. It felt like home.” he says in his (still English) accent. After completing his compulsory military service and trying his hand as a professional footballer, Onisiforou opened his bakery in 2010 because he felt it was a good time. Tourism was booming and the Mediterranean lifestyle on the beautiful cliffs and beaches were too good to pass up.

There was a lot of foreign money in the economy thanks to the real estate bubble and because of the inflated banking sector, credit was easy to come by. Cyprus’ national debt is just €15bn but its banks hold €64.8bn in deposits of which some €25bn are held by foreigners. To give you a sense of bubble’s scale, his parent's 3 bedroom house in the centre of Larnaca cost €30,000 in 2002 and by the end of the decade, the 900 sq ft property was valued at €180,000. Now however, it would fetch just €100,000.

The mood is understandably gloomy and people’s lives have changed over the last year. Ordinary citizens feel that Cyprus’ new President Nicos Anastasiades, who had said he would not to conduct the ‘haircut’ on savings banks has gone back on his word. They feel an uneasy tension with the EU: on one hand they are angry at being dictated to but on the other, memories of the 1974 war with Turkey are still fresh in the national psyche and EU membership guarantees them protection. Onisiforou’s father, was in the war, says, “Last Monday was a national holiday when everyone is usually out. This year people stayed at home and it felt like 1974 again. There was the same tension in the air but this time, mixed with a sense of disappointment.”

What will actually happen to depositors’ money is unclear and would have far-reaching implications for the very foundations of the EU itself. The free-movement of capital is one of the institution’s principals and if money is “locked” into the economy, it could set a perilous precedent for the likes of Italy, Spain, Portugal and Greece and lead to new EU legislation. Cypriots feel they are being made an example of; a small economy used as a guinea-pig to show other teetering economies what they could face if they don’t adhere to the EU’s austerity demands.

Russian oligarchs may be feeling the heat as many use the island as a tax-haven, but the Eurozone crisis and the recent banking crisis have affected local people’s everyday lives to a much greater degree. For example, many workers have and will lose their jobs as the government goes about downsizing the bloated banking sector. It will add to the unemployment that stands at 14% as an inevitable recession follows the recent €10bn EU bail-out. One of Onisiforou’s close friends, a graphic designer, will most likely lose her job as the company will not longer he able to extend its line of credit; the ‘haircut’ will affect those outside the finance industry too. Companies are also having trouble accessing their bank accounts – everyone is waiting to see who will lose what.

Food security, according to Onisiforou will not be as big an issue as it is in Greece, for example, because many families grow their own vegetables. “It common for every family to have a lemon tree and go either hunting or fishing” he says, “There is a culture of always having food on the table.” He worries that many young people will leave the country and join or rejoin large communities in London, New York or Sydney. He and his wife have had to think twice about starting a family, though with their business providing them stable income (they weren't directly affected by the bank account freezing as cash inflows sustained them for the last fortnight) they are committed to staying in Larnaca for now. Onisiforou is optimistic: he sees no reason why Cyprus cannot overcome the crisis like Iceland did in 2008. He draws parallels between the two small, island nations with banks too large for their own good.

Average people are disconcerted because, like with previous disasters, it is hard to assign blame to one person. The Turkish invasion of Cyprus in 1974, The Helios Airways plane crash that killed all 121 passengers in 2005, the Zygi naval base explosion in 2011 and the 2013 banking crisis all have one thing in common: no one has been brought to justice. “If I open a bakery and run it into the ground then I take the blame. The Cypriot people have to look at the economy in the same way. It’s the people who run the economy, not just one individual” he says. There is greed, negligence, corruption and a lack of accountability that has disenchanted the easy-going islanders.

2,931
Thank you for your comment, we value your opinion and the time you took to write to us!

Tweets by @forbesindia
Prev
Education Challenge: Designing for Scale or Swell
Next
In education once is not enough