Government funds are valuable human development capital that needs to be channelised judiciously to achieve the best possible outcomes for citizens. 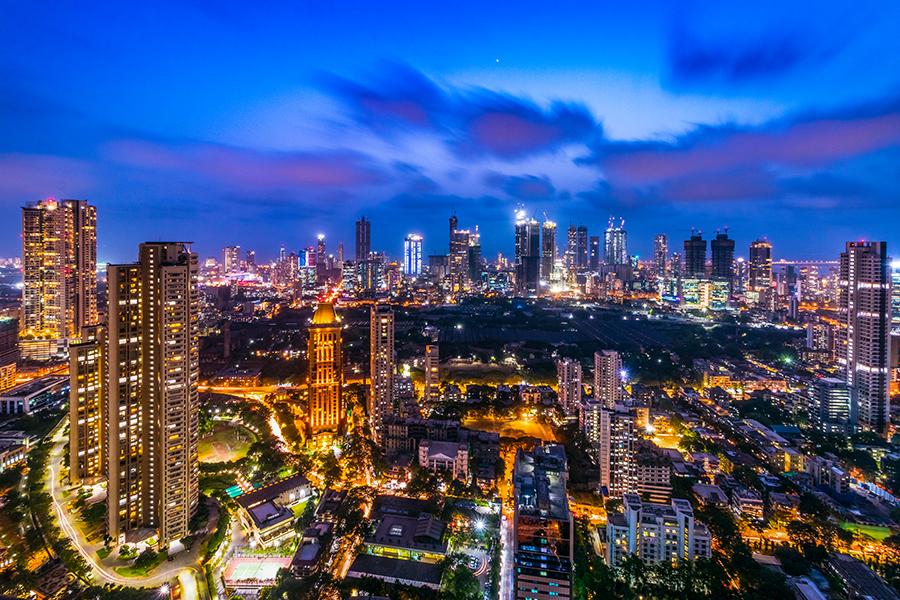 The 15th Finance Commission submitted its final report in November 2020 and the government tabled it in the parliament February 1, 2021, along with Budget 2021. It also submitted an explanatory memorandum containing its responses to the recommendations of the 15th Finance Commission (FC). The Government of India accepted the FC’s recommendations with respect to local governments, including municipalities (also known in government parlance as urban local bodies). The 15th FC allocated grants of Rs 1.55 lakh crore to municipalities, with the following distribution. [see figure] 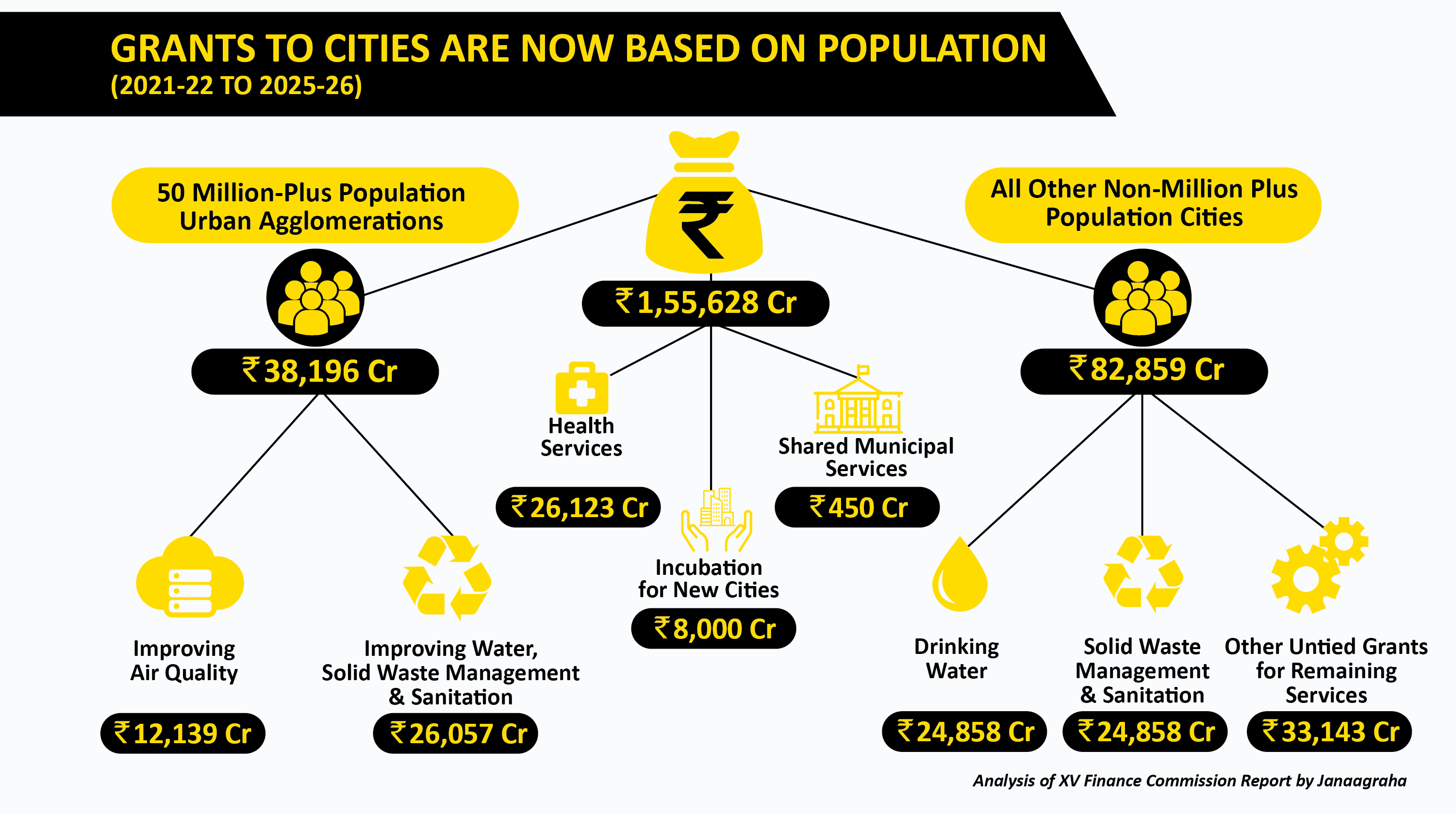 First, a quick introduction to the Finance Commission. The FC is constituted every five years by the Ministry of Finance to recommend a formula for distribution of tax revenues of the union government, between the central and state governments (known as a vertical distribution), and between various state governments (known as a horizontal distribution). It is also entrusted with making recommendations on augmenting revenues of local governments. It works in accordance with terms of reference issued by the government of India, and its report along with the responses of the central government to its recommendations is tabled in the parliament.

There is good reason to pay close attention to the recommendations of the 15th FC on municipalities. They are bold, imaginative and far-sighted. There are five specific recommendations through which the 15th Finance Commission has shattered the current status quo and changedthe trajectory of financial governance reforms in India’s cities. We look at each of those five recommendations in greater detail below.

The divisible pool is Gross Tax revenues of the central government which includes Corporation Tax (i.e. tax on the income of companies), Income Tax, Customs, Union Excise Duties, Service Tax/GST and other taxes. Surcharge on taxes and cess do not form part of this divisible pool.

The grants to local governments as a percentage of the divisible pool are therefore lesser in 15th FC than in the 14th FC. The share of municipalities within the grants to local governments is marginally only rising from 30 percent to 35 percent. Yet what is more relevant is the size of the absolute allocation. To put this in perspective, 15th FC’s grants could constitute up to 25 percent of the annual budgets of municipalities, excluding Mumbai. Further, pushing more funds down the fiscal pipeline to municipalities comes with the constraint of execution capabilities and absorptive capacities of municipalities. Very often, the challenge of inadequate funds to meet basic services coexists with the inability to spend even existing funds.

State governments and municipalities would therefore need to aggressively ramp up their execution capabilities and absorptive capacities to ensure 15th FC funds do not lie idle in the state treasury or municipal bank accounts, but are utilised to deliver infrastructure and services to citizens, by conceiving projects, floating tenders and executing works or delivering services. Besides efficient and effective process workflows, this is often a function of human resource numbers and capabilities. Given 15th FC funds cannot be utilised for salaries, it becomes incumbent on state governments to aggressively build capacities through shared municipal services too.

The geographical spread of cities and towns in India is instructive. There are over 4,500 cities and towns in India that are governed under various state municipal acts (therefore called statutory towns), broadly classified as municipal corporations, municipalities or town panchayats depending on specific criteria—such as population or average annual income—laid down in respective the municipal acts. There are few other categories of city governments in India such as notified area committees, industrial townships, cantonment boards, and so on, which may be governed under separate legislation.

There are an additional 3,800-plus settlements identified by the 2011 Census as showing urban characteristics (therefore called census towns). These are villages or parts of villages (because census blocks, the smallest unit in the census, may not be contiguous with village boundaries) that meet the three criteria laid down by Census 2011—minimum population of five thousand, a minimum density of 400 persons per square kilometre, and at least 70 percent of the male working population engaged in non-agricultural activities. These census towns are governed by Panchayati Raj institutions i.e. through a three-tiered structure of gram panchayats, block panchayats and zilla panchayats, or in some cases just two tiers.

After the Constitution (Seventy fourth) Amendment Act, 1992 (74th CAA), this is the first major policy intervention to mainstream metropolitan governance in India. The requirement in the 74th CAA to designate a million-plus popuation urban area as a metropolitan area and constitute a Metropolitan Planning Committee has never been meaningfully implemented anywhere in India. Complex challenges such as air pollution, water supply, waste management (both solid and liquid) do not adhere to municipal boundaries. They play out over a larger geographical footprint, typically metropolitan in nature. Further, metropolitan economies are expected to outperform provincial and national economies. Metropolitan governance is therefore important across both quality of life, as well as economic growth and jobs.

How the 15th FC has incentivised the focus on metropolitan governance is instructive. The 14th FC had set aside 20 percent of its allocations as performance grants tied to audited accounts, revenue improvement and disclosure of service-level benchmarks. Larger cities such as Mumbai and Bengaluru have typically not found performance grants to be substantive enough for them to take the effort to accomplish reforms. With 100 percent funding linked to outcome, larger cities would make efforts to accomplish reforms. This recommendation, therefore, has far-reaching implications from both of the above perspectives.

Further, the provision of Rs 450 crore for shared municipal services open up the possibility of “uber”ising municipal services, both finance and revenue related, and other citizen-facing services too. The current shortage in skilled human resources, the time and funding required to ramp up, and the clustering of the urban population in India, all taken together make this a very attractive proposition.

The passport Seva Kendra (collaboration with Tata Consultancy Services) and Income Tax centralised processing centre (collaboration with Infosys) examples given in the report refer to useful precedents in the government system. India is the world’s outsourcing hub for corporates. Adapting those operating models can bring significant benefits to municipalities and citizens too.

3. Two game-changer entry conditions pertaining to publishing of audited annual accounts and notification of floor rates for property tax applicable to every municipality, to avail any grant from FC

Accounting reforms in municipalities have dragged on for fifteen to twenty years. Municipalities operate in a single city (therefore in a single time zone), in a single currency, and under a single statute (the municipal act). Large companies, on the other hand, operate in dozens of countries, time zones and currencies, and report their financial information under various jurisdictions. Yet, municipalities in India have not managed to publish their audited annual accounts in a credible, timely manner for far too long. Building on reform measures of previous Finance Commissions, the 15th FC has made a bold attempt to take this agenda to its logical culmination.

For the first time, every municipality in India will need to publicly disclose online both audited and unaudited annual accounts in a time-bound manner. This is a mandatory condition to access any grant under 15th FC. Secondly, in order to fast-track reforms to property taxation, the 15th FC has mandated a second entry condition of minimum floor rate for property tax followed by a consistent increase in collections (in line with the increase in the state’s GDP). Property tax is the single largest source of revenue for municipalities in India. In a single stroke, 15th FC may have ushered in the most serious push to financial governance of India’s municipalities. The Ministry of Housing and Urban Affairs also has been proactive in launching an online portal, www.cityfinance.in, earlier this year as a national platform for municipal finance in India.

State Finance Commissions are the equivalent to the Union Finance Commission for the state level. They were brought into existence through the 74th CAA as an institutional mechanism to ensure formula-based and therefore predictable and fair fiscal transfers to panchayats and municipalities. However, most states have not nurtured them into credible institutions. Only fifteen states have set up the fifth or the sixth SFCs and several states have still not moved beyond the second or third SFC.

By stipulating a deadline to state governments, the 15th FC has once again tried to conclude on a crucial reform agenda of fiscal decentralisation in India. There are limitations to how far such recommendations can go. States could opt to sacrifice their grants under 15th FC and not undertake these reforms. Alternatively, they could undertake the reform to avail the grant, but not accept the SFC’s recommendations. However given there was absolutely no impetus to resuscitate State Finance Commissions, this is sure to strengthen the hands of progressive and reformist voices within state governments.

5. All service level benchmarks, annual accounts to be published on national platform for minicipal finance.

There are broadly two kinds of information that municipalities should publicly disclose. One, financial information such as annual budgets, audited annual accounts and details of contractor payments. Second, operational or performance information on what they actually achieved in terms of citizen outcomes or functional performance. Example, how many households were covered by the door to door garbage pick-up, or what was the adequacy and continuity of water supply in households, etc. In mid-2000s, the Ministry of Housing and Urban Affairs had conceived and implemented a Service Level Benchmark framework across four areas of water supply, sanitation, solid waste management and stormwater drains, comprising close to thirty indicators. Today, over 1,000 municipalities across five states publish these (and few more) on a platform called www.pas.org.in hosted by the Centre for Water and Sanitation, CEPT University, Ahmedabad. While the 14th FC had included publication of service level benchmarks as a performance grant condition, it ensured much-needed policy continuity but not necessarily better quality data or greater transparency. The 15th FC has also emphasised on the need to digitalise municipal accounts, and on an integrated view of municipal sector finances at state and union levels.

With this pervasive recommendation on financial and operational transparency, 15th FC has prepared the ground for both better data-driven decisions at municipal and state levels, and also opportunities for mayors, councillors and citizens to engage more closely with such open civic data. Ultimately in a democracy, higher levels of funding and greater transparency would need to be complemented by greater civic engagement and demand for accountability.

Large-scale systemic change does not always happen through a big bang. Very often it happens in a slow, systematic and invisible manner. Here too, the 15th Finance Commission has essentially built on a range of progressive measures of previous Finance Commissions. But also added a touch of boldness and ambition, and synthesised them with other reform initiatives under Atmanirbhar Bharat Abhiyan (property tax and user fee linkage to guidance values and operating costs respectively) and Atal Mission For Rejuvenation And Urban Transformation (AMRUT) (wide range of municipal finance reforms). The sharp focus on water and sanitation also exemplifies that approach. Government funds are valuable human development capital that needs to be channelised judiciously to achieve the best possible outcomes for citizens. The bottom line is that the 15th FC has created near-perfect conditions for the executive particularly at the state level to usher in a new era of financial sustainability and financial accountability in India’s cities. It is now really up to state governments to show leadership and deliver.

Author is CEO of Janaagraha

50,718
Thank you for your comment, we value your opinion and the time you took to write to us!