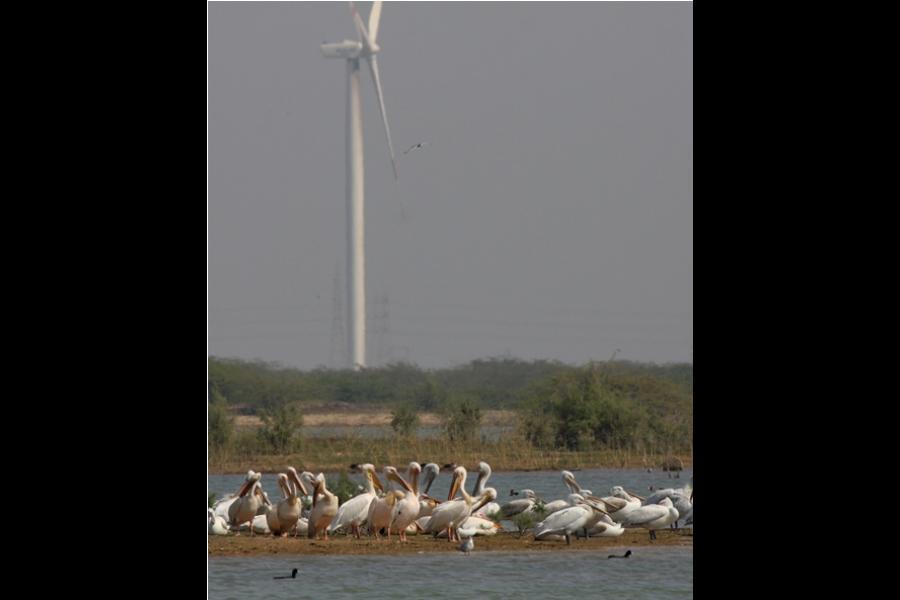 Of India’s more than two lakh megawatt power capacity, only 12.2 percent is generated from renewable sources. If you add hydro power to this, the ratio goes up to 30.81 percent, according to the ministry of power.

After the launch of the National Solar Mission in 2010, solar energy’s share in renewables went up from zero to 18 percent in under two years. Even though energy generated from renewable sources is increasing, many complain that capacity addition is not happening fast enough in the country. In 2012, while China invested almost $65 billion in clean energy, India invested only a tenth of that at $6.9 billion.

While environmentalists are egging on the government to invest more in clean energy, advocates of biodiversity conservation are taking up cudgels against them. They argue that the energy may be clean but it comes at the cost of eroding biodiversity. There are two areas where this clash is intensifying: wastelands and forests.

In an earlier blog post, here, I had delved into the issues the Great Indian Bustard faces. Indeed, Ramki Sreenivasan, co-founder, Conservation India, says, “This may be the second mega species to go extinct in India after the cheetah, which we lost in 1947.” From foxes, spiny tail lizard, chinkaras, to elephants and tigers in the Western Ghats in the South, there are a host of animal species that face similar threats.

The problem with “wasteland” is its definition has remained the same when the British clubbed grasslands and savannahs under the term. This is a problem because the government gives away wastelands for development or often, for solar or wind farms.

“It’s a form of land grab,” says Dr Abi Tamim Vanak, Fellow, National Environmental Sciences Program and a faculty at ATREE, Bangalore. “In a lot of places, vast tracts of land are being grabbed in the name of renewable energy. All across the country, in Tamil Nadu, Karnataka, Rajasthan, it is so called wasteland that is being grabbed and converted to other uses. Areas categorized as wasteland are in many cases grasslands and have a lot of ecological value,” he says.

“Studies in Europe and the US have shown that a turbine kills four birds every year,” says Dr Gopi Sundar, Director, Program SarusScape, International Crane Foundation. In those countries, birds like raptors have been killed due to wind mills in their habitation. However, Sundar is also quick to point out that things may be different for India. He says, “I have visited revenue lands in Gujarat, which have fantastic grasslands and enormous number of wind mills. This was during peak migration season, and I did not see a single bird killed (during a two-day visit).”

Sundar points out that bird mortality may be minimal in South Asia as they are used to adapting to many structures around them. The larger issue is, he says, “Birds are sensitive to this [wind mills and solar farms], and the disturbance exhibited because of the structure or due to the wind mill itself, reduces the amount of area available to the species,” says Dr Sundar. “You may not see a bird dying, but the area to forage,” he says. That is where Tamim Vanak’s point resonates: Not only endangered species, but all kinds of birds and animals are affected by wind mills and solar farms.

Down South, Sanjay Gubbi, Scientist, Nature Conservation Foundation and Panthera, has worked with the government and also taken the legal route to stop some mini-hydels(small 25 MW hydroelectric power plants) in the Western Ghats of Karnataka that were affecting tiger and elephant habitats in the area. It was relatively easier to fight the mini-hydel plants because they almost always were planned in protected forests. Wastelands have no such ring-fences.

Gubbi managed to stop the mini-hydel construction in 2008, and got the forest department to correct papers and where the department has blatantly lied about the area not being an elephant corridor.

“Where is the greenness in this green energy?” asks Gubbi. Solar and wind companies get carbon credits from the United Nations Framework Convention on Climate Change (UNFCC). Gubbi says, “Tax payers in countries in Europe are inadvertently paying for destruction of the Western Ghats,” he says. This holds true for companies that set up in the wasteland areas as well, which are only bound to increase given new pushes by policy makers.

While forests areas do get more vocal support from the government, wastelands barely come under areas declared protected by the Ministry of Environment and Forests. Tamim Vanak helps paint that picture better and says, "Solar farms are being put up in huge areas across Rajasthan and Gujarat. In prime grassland or scrublands. Once you put up solar farms, the habitat is gone because nothing else will come up beneath. In Germany, when they put solar panels, it goes on people’s houses. They don’t put solar power somewhere else and have transmission to bring energy in. It is a decentralised process. But in India, they build solar farms and spend money transporting the energy. It does not make environmental or economic sense to me."

In the US and Europe, there are clear guidelines on where wind and solar farms can be built. Perhaps policy makers in India should study those before going full steam ahead with another phase of policies towards wind and solar.

8,779
Thank you for your comment, we value your opinion and the time you took to write to us!

Tweets by @forbesindia
Prev
Bangalore's Rain-Catcher: The man who never paid for water
Next
Twist in the Tale: GM crop adds to Food Security