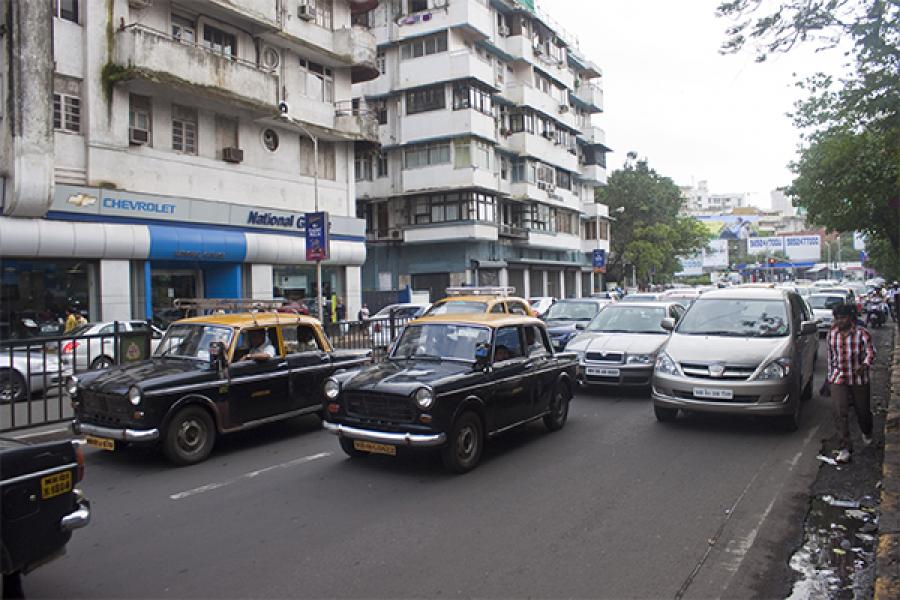 India is witnessing a revolutionary change in urban road passenger conveyance - from traditional horse carriages of only a few decades earlier to modern-day fleet cabs, radio taxis and rental cars. The industry, very new and growing fast, is already valued at $6-$9 billion. “Why own a car, when you have a taxi at your doorstep?” has emerged as a trending concept in India.  The following new models of business operation are visible in the Indian context:

Marketplace/ aggregator business model This model has emerged as the most popular model operated by large players like Uber, Ola, Meru, Taxi for sure (‘TFS’) (acquired by Ola in a cash and stock deal of $200 million), YourCabs, TaxiGuide, TaxiPixi, and BookmyCab, etc. In this model, drivers register themselves with the operator and log onto a two-way communication device. The customers connect to the operators via a mobile app.

Cab sharing business model
The cab sharing model was introduced in India in January 2015 by Bla Bla, acting as a facilitator between the two parties travelling on the same route.  This platform allows private vehicle owners and other travellers inform each other about their travel plans. The company fixes a ceiling on the cost of travel depending on the route to avoid unnecessary hassles later. This is a relatively new model and how it pans out would be a function of its popularity and the regulatory regime that is likely to evolve over time.

Self-drive business model
The self-drive model was popularised in India by Zoom. This model is quite similar to the model followed by companies like Hertz and Avis in several developed economies. The company provides a car on a rental basis to consumers charging on an hourly/daily basis. The payment has to be made in advance. The advantages of a self-drive model are cost-efficiency as it eliminates the cost of driver, and flexibility of time.

Recent trends
The industry is witnessing high foreign capital influx with major funding in domestic and global giants, Ola and Uber, respectively. Ola has so far raised a whopping $1.3 billion (approximately) attracting investments from funds like Tiger Global, Softbank, DST Global with a recent influx of $500 million from Baillie Gifford, Falcon Edge and China’s largest cab aggregator Didi Kuaidi. Uber, raising the investment war, in July 2015 pledged to invest $1 billion in the Indian market over a span of nine months.

The industry, apart from global and domestic investments, is also boosted by acquisitions led by the $200 million acquisition of TFS by Ola. The bolstering industry is poised to see more global inflow of funds and mergers and acquisitions between various domestic and global giants not only to expand operations but also to eliminate rising competition.

The industry is facing opposition from traditional taxi service providers for a serious hit on their business not only in India but also across globe. These new operators are also facing stringent regulations in obtaining operation licences. For instance, the Delhi government had refused to issue licence to Uber following the customer’s safety case. Ola faced an issue when it started the operation of its cabs on All India Tourist Permits (‘AITPs’) with diesel/ petrol cars, which was in violation of the Supreme Court’s order mandating operation of commercial vehicles in Delhi only on CNG.

The industry is also witnessing a price war with companies offering deep discounts on cab fares, free rides to customer as well as higher incentives to drivers to expand their share in the still-underpenetrated market.

Regulatory developments
The industry, as it matures, is also witnessing regulatory changes specifically due to concerns arising from its operating models. The Reserve Bank of India (RBI) recently mandated a two-step verification process for accepting online payments and said that payments for domestic services should be settled through domestic payment gateways only.

The service tax laws introduced with effect from March 1, 2015, are a concept of aggregator-based assessment. The intent of introducing this concept is:

1. To enable service tax compliance and payment at a single point instead of pursuing a large number of service providers/vendors who may or may not fall under the service tax threshold revenues of INR 1 mn.

The service tax laws also introduced a (mandatory) requirement of appointing representative assessee in case an aggregator does not have a physical presence in India.

Rising prospects of Taxicab services in India: Future prospects
The taxicab industry has revolutionised the way we look at commuting over a short period of time. Easy availability, quick access and competitive rates provide freedom of choice and comfort for end-user besides creating business for automobile/ financing/ taxicab companies and employment opportunities.  The regulatory environment will keep on evolving over time and will have to keep pace with ever changing needs. The taxicab industry is poised towards a bright future in the wake of ever increasing passenger conveyance demands of more than a billion Indians.

2,287
Thank you for your comment, we value your opinion and the time you took to write to us!