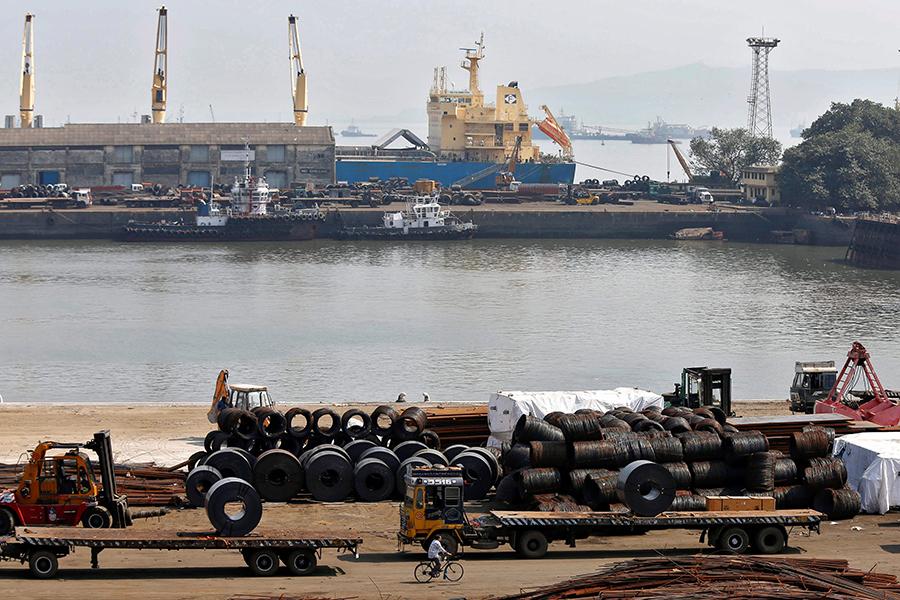 A worker rides his bicycle past steel rims in a dockyard at Mumbai Port Trust in Mumbai November 17, 2014. REUTERS/Shailesh Andrade/File Photo - S1BETTGTLOAA

The last few years have seen the government take multiple critical economic reforms -- from regulatory to ease of doing business. While the impact of some initiatives is visible such as the ranking in ease of doing business, others are yet to surface. Of course, one of the biggest questions from the economic research perspective is whether we are providing enough in the form of reforms to keep meaningful and sustainable growth trajectory. While the actions of the government are imperative in determining the performance of the economy, the optimism amongst the business leaders across sectors stands as a litmus test. There are two critical factors i.e. development of micro, small and medium enterprises (MSMEs) and enhanced investment in infrastructure, especially seaports to be considered amongst series of imperatives for sustainable development.

Economy begins post-shock rebound The Q4 2017 quarterly gross domestic product (GDP) estimate showed accelerated growth. The pace improved from 5.7 percent and 6.5 percent in the two previous quarters, to 7.2 percent in Q4 2017. To juxtapose, if the GDP of the two countries are compatible, India was growing faster than China (at 6.8 percent) in Q4 2017. The Central Statistics Office (CSO) of India raised its growth forecast for FY 2017-18 from 6.5 percent to 6.6 percent, the same as Dun & Bradstreet's forecast. Further, the optimism levels amongst chief financial officers (CFOs) have increased to a five-quarter high during Q1 2018. The percentage of CFOs who expect a decrease in the level of financial risk on company's balance sheet is at a 13-quarter high in the services sector. This is a stepping stone towards achieving business goals thereby benefitting the economy.

While the CFOs are the best judge of the financial performance of the companies, chief executive officers (CEOs) have a broader vision of the opportunities and challenges faced by the company/industry. In unequivocal terms, Dun and Bradstreet Business Optimism Index highlighted that business across sectors are optimistic about the demand scenario and expect it to improve, given the fading of the impact of demonetisation and stability returning post-goods & services tax (GST).

The above few statistics are corroborating the facts that the Indian economy is on a recovery path. While these developments are noteworthy when we look at revival in the economy, but more structured approach is required to sustain these recoveries.

SMEs – The spine
At 51 million SMEs, India is on the par with China. With great initiatives and policies coming in, India has seen a strengthening MSME segment in the past few years.

Considerable progress has been made on few challenges that had been the major impediments to the growth of MSMEs. One can draw an inference that concerns such as government regulations, bureaucracy, availability and cost of land, and certain labour-related challenges have reduced to some extent. Though, the key challenges such as access to finance; availability of infrastructure; availability of skilled labour; power supply and technology-related issues continue to plague the sector. While demonetisation and GST have had an impact, they have also created a framework for majority of MSMEs to join the organised segment.

Our recent survey revealed that digital transformation is the biggest agenda driving the next growth phase for SMEs. Around 64 percent of SMEs said that the technology adoption is not a survival tactic but in anticipation of thriving growth, and hence is on the top of their priority list.

While we acknowledge the contribution of MSME in the economy, the issues and challenges faced by this sector have to be immediately addressed.

Sea-route of growth
Ports are a key part of trade infrastructure. Ports play a critical role in the Indian infrastructure and in increasing India's share in world exports. To enhance product competitiveness, we would have to improve the infrastructure for trade. To increase share of exports in world trade and climb up the ranks in ease of doing business, India needs to address its port ecosystem.

There are some challenges which are faced by the sector in India. Port congestion, custom clearance, shipping line issues and charges, documentation and paperwork and regulatory clearances—are few of the major hurdles leading to detention/demurrage and unpredictable time and cost. The government is taking every possible initiative to boost the infrastructure sector and the country is witnessing significant interest from international investors in the infrastructure space. With the ambitious Sagarmala project in line to promote port-led development, there are signs of change being experienced in the sector, too. There is intent, however, more focused and consistent efforts are required to resolve issues and challenges faced by this sector.

On a growth trajectory
No doubt, the Indian economy is on higher growth trajectory. While there are some sectors which are growing at a higher rate, there are some which are grappling with various policy measures and challenges. Nonetheless, the indomitable spirit and commitment to grow is visible. India is definitely rising; what it needs is to fix what is broken and relinquish what need to be eschewed.

NOTE: News18 Rising India Summit will bring together leading statesmen, thinkers, economists and intellectuals from across India and the world to discuss the future that belongs to India. It will be held on March 16 and 17 in New Delhi

(News18 is a part of the Network18 Group, publisher of Forbes India magazine.)

6,469
Thank you for your comment, we value your opinion and the time you took to write to us!

Tweets by @forbesindia
Prev
CSR: The unseen bridge between business and diplomacy
Next
70 percent duty may put Rs 12,000-crore solar projects at risk