Is nickel the new oil in a world dominated by batteries?

If India wants to take a leadership position in batteries, it should get its nickel strategy right The story starts with the bull run of Li-ion batteries, leaving all other energy storage technologies in the dust in the second decade of the 21st century. Li-ion batteries power everything from the pacemaker in the human heart to the flying vehicles that will dot our skyline soon. The Li-ion batteries pack price/kwh dropped heavily from over $1,100 in 2010 to $156 in 2019 (an 87 percent decline) due to demand-induced scale and movement of chemistry towards cheaper materials. This is where nickel came, out of nowhere, into the new world of energy storage.

The first commercial Li-ion battery came inside a Sony Camcorder developed jointly by a Sony and Asahi Kasei team led by Yoshio Nishi in 1991. This cell used a chemistry called LCO (Lithium Cobalt Oxide), which led to the long history of LCO chemistry in 3C (computer, communication and consumer electronic) devices even until today. Cobalt, being a very expensive metal, the thirst for higher power grew along with the search for cheaper alternatives.

Then the LFP technology, which used inexpensive Lithium iron-phosphate (LFP) coincided with the explosive growth of Chinese electric buses that suited the higher power, cheap and safe olivine structure of the LFP. It also found traction in stationary solar storage market due to the lack of size limitations. LFP had lower energy density, which became increasingly important for the range-anxious passenger EV market. Passenger EVs became the largest consumer of batteries in the world thanks to BYD, Tesla and other successful EV companies, who will consume more than 75 percent of global battery production for at least the next 20 years.

In 2011, Lithium nickel manganese cobalt oxide (NMC) Li-ion cathodes, developed at Argonne National Laboratory, were manufactured commercially by BASF in Ohio. Initially this technology used equal amounts of cheap nickel and manganese along with expensive cobalt (NMC111). Nickel is cheap and increases the energy density. Companies like Umicore (world’s largest Li-ion cathode player) progressively increased the nickel content and managed to obtain safe battery elements. In 2017, Umicore’s South Korean Battery materials factory had extremely stable NMC811 technology, which used eight parts Nickel and one part each of manganese and cobalt. It had so much demand that Umicore was building new factories to supply the demand. Tesla used a slightly different chemistry called NCA (nickel cobalt aluminum oxide), which also used eight parts Nickel. Industry sources say that Tesla has also jumped the NMC811 bandwagon recently, with every single one of the top 15 biggest battery plants announced in 2019 being NMC plants.

Elon Musk, the single largest buyer of batteries on the planet, said in 2016, “Our cells should be called nickel-graphite cells. [there’s] a little bit of lithium in there, but it’s like the salt on the salad”.

The statement might surprise some readers. But, World Resource Institute’s report illustrates that nickel is required 10 times more than lithium to build one GWh of NMC811 batteries. The volume of nickel required makes stockpiling almost impossible, compared to storing low volume minerals like cobalt and lithium. Though lithium is more expensive than nickel, the sheer volume makes cumulative nickel value higher than lithium value for a battery player. 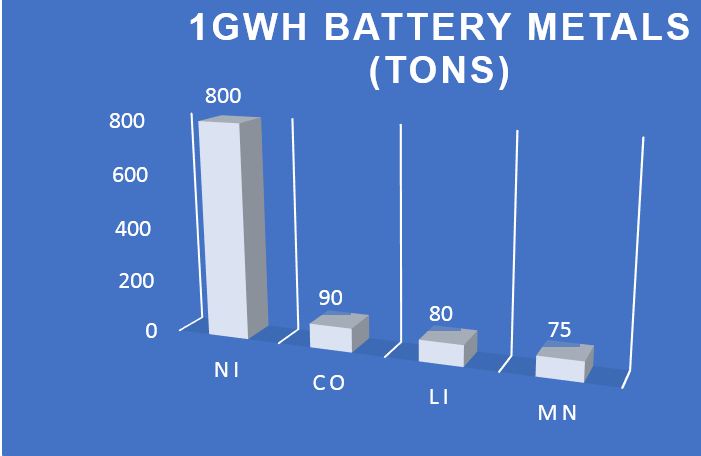 And off late, the lithium prices are consistently coming down. Australia’s sudden ramp-up to become the world’s No.1 producer of lithium doesn’t seem like changing the downward trend. Global lithium giants like Albemarle are scaling back expansion plans and Australian players are planning production cuts. Battery grade lithium carbonate price was 15 percent down in fourth quarter of 2019 and lithium mines are being sold for below par prices.

On the other hand, nickel has been a standout performer in 2019 as probability of potential supply curbs kept the prices afloat. In the same quarter, nickel prices surged over 48 percent on London LME (YTD) whereas prices on the MCX rose over 54 percent. In the span of two months, more than half of the nickel in the exchange network—a last-resort for hedgers and traders—has been withdrawn. Nickel Inventories are the lowest in 11 years and Indonesia (the largest Ni producer) is executing export bans to promote local battery production.

Auto giants like Volkswagen are buying up the supply chain of batteries not because of resource scarcity, but on fears over supply chain ramp-up bottlenecks. There could be a case where countries might have easy access to low volume lithium and cobalt, but struggle to procure the required high volume nickel. Hence, if India wants to take a leadership position in batteries, it should get its nickel strategy right.

7,546
Thank you for your comment, we value your opinion and the time you took to write to us!

Tweets by @forbes_india
Prev
What India needs from Budget 2020 to get back on the growth path
Next
Should you invest in InvITs?