It's Not About Size... It's About Sanitation

Rich or poor, we breathe the same air and even if we’re sipping from bottles of Evian in our Maybachs in Mumbai, we’re no better off. In essence we’re leaving cities in India and large swathes of the developing world to a generation that will live shorter, unhealthier and less productive lives for no fault of their own. The real culprits are likely pointing back at us in the mirror. Every plastic wrapper thrown out of a rickshaw, every paan spat out on a wall, every slum dweller than defecated on the sidewalk, add up to an enormous mountain of shit!

In 2012, India was home to six of the 25 largest metropolitan regions in the world. Delhi and Mumbai actually made it to the top 10. Normally this would be worth publicising, except that it isn’t always about size. Not a single Indian city made it into the top 50 of Mercer Consulting’s 2012 global ranking of cities offering the highest quality of life. In fact, Delhi and Mumbai actually made it to Mercer’s list of the 25 dirtiest cities in the world, with the lowest sanitation and health scores. This is the sad reality every urban Indian resident wakes up to each stinking, smoggy morning, and goes back to bed with. 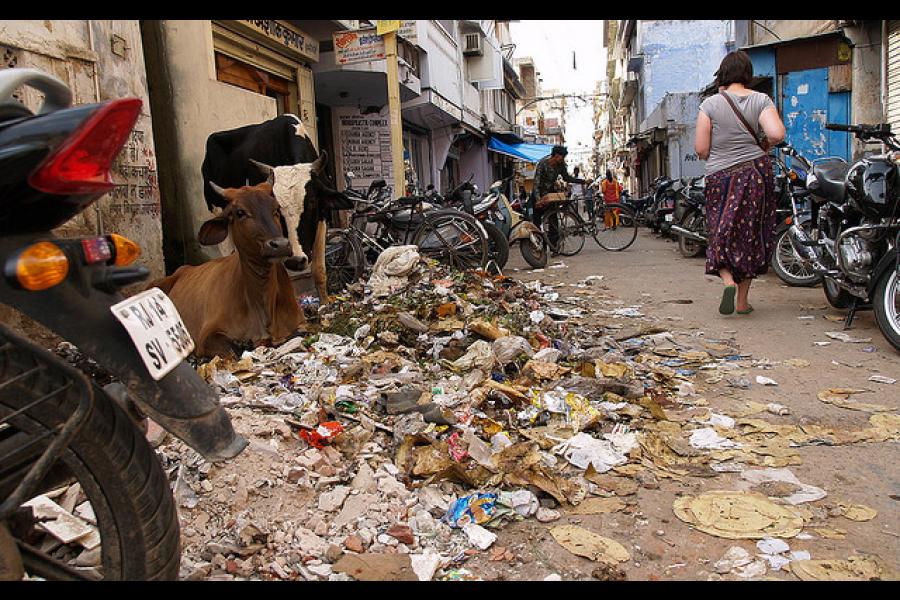 India’s cities have much to offer—a diversity of opportunities, experiences, people, food... They are fascinating places, but the slow rot makes me wonder whether they’re worth staying for. A recent study that used 20 years of data to compare life expectancy in more and less polluted parts of China highlighted that residents in more polluted cities died approximately six years earlier than those in less polluted ones. On a base of 500 million people, that translates to 2.5 billion lost years. A study of this scale and intent in Indian cities would likely lead to very similar results. Work funded by the Blacksmith Institute and the Global Alliance on Health and Pollution have also highlighted the heavy toll that unsanitary conditions and environmental toxins take on the brains and bodies of children. Rich or poor, we breathe the same air and even if we’re sipping from bottles of Evian in our Maybachs in Mumbai, we’re no better off. In essence we’re leaving cities in India and large swathes of the developing world to a generation that will live shorter, unhealthier and less productive lives for no fault of their own.

It's a cultural cop out in South Asia to apportion responsibility for all that goes wrong to some higher power. I doubt one of the many Gods that pepper the collective conscience had anything to do with untreated industrial effluent being dumped in an open sewer, or a very full bag of garbage being tossed out of a tenth storey window. We're quick to point to corrupt, morally bankrupt governments and municipal administrations as the root of our problems, but the real culprits are likely pointing back at us in the mirror. Every plastic wrapper tossed on the street, every paan spat out on a wall, every plastic water bottle used and discarded add up to an enormous mountain of shit! In the midst of this gloom, there is always a sliver of hope. A small group of motivated Indians decided they wanted change. Under the banner of The Ugly Indian, with the slogan "Kaam chalu mooh bandh. Stop Talking, Start Doing", they are cleaning up their neighbourhood one eyesore at a time. I came across them a few years ago when a friend posted pictures of their work on Facebook. Driven by a few motivated individuals who believe that only "we can save us from ourselves", they turned cleaning up neighbourhoods into a very effective community engagement exercise. Using just a little bit of money to buy paint and potted plants, and armed with brooms, groups of people mobilise to blitz a neighbourhood or intersection and clean it up. Even though they clearly state on their website that they will not "moralize", this is public shaming at its most effective. The group's core base of well-intentioned youngsters, through these acts, support each other in stepping out of their comfort zones, their economic privileges, and class and caste clans to make a difference. Though small, this is significant for a part of the world so concerned about status.

Margaret Mead famously said "Never doubt that a small group of thoughtful, committed citizens can change the world. Indeed, it is the only thing that ever has." In beautifying their neighbourhoods, in making such a strong public comment on the state of their environments, in establishing this new social order and precedent, they are, in Gandhi's words, being the change that they want to see in the world.

7,451
Thank you for your comment, we value your opinion and the time you took to write to us!