Detroit is a very real, sad example of how a boom turned into bust in less than a generation. The newfound prudence in the bond markets from investors who have been burned by this default, may perhaps be the real driver of change in getting municipal leaders and planners to make the difficult choices they need to.

Detroit's Chapter 9 bankruptcy filing last week sent violent shockwaves throughout the municipal bond market in North America. The New York Times, in a fulsome story on the issue, described it as “a calculated financial move that dismayed some residents, but surprised few.” For those following this saga, it wasn't a matter of if, but when. 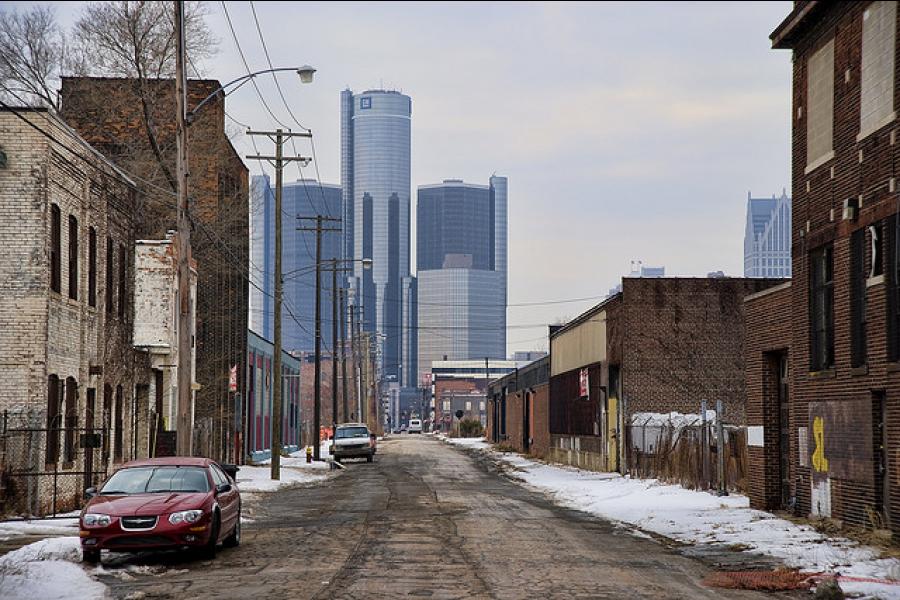 Once a thriving city and the heart of the global automotive industry (home to the Big Three- Chrysler, General Motors and Ford), the rot in Detroit's governance structures coupled with decades of fiscal mismanagement, drove an already declining city to its knees. The $18 billion in debt that Detroit owes its vendors, employees and other creditors, rises mountains above Jefferson County, Alabama's $4.2 billion bankruptcy in 2011.

Even as lawyers pick through the legalities of the filing, and judges start to make decisions on the City's future, there needs to be a post-mortem on the three key issues that led to this sordid present- poor governance, fiscal mismanagement, and last but not least, bad urban planning.

These issues hold lessons for cities across the world. The Republican State Governor of Michigan's moves to first declare a financial state of emergency and appoint an Emergency Manager to supersede the City's elected Mayor and Council in March, and then to force the City's bankruptcy last week, have been clouded by accusations of racism and discrimination by a largely Democratic population in the City of Detroit. What cannot be excused though are the decades of corruption and mismanagement at both the State and local levels. A report from the Better Government Association, an advocacy group, ranked Michigan 48th out of 50 states in the US in four key areas of governance. The State failed in holding open meetings for the public, in freedom of information for citizens, in protecting whistle-blowers, and on conflict of interest laws for elected officials. Detroit's situation is even bleaker. A Washington Post story states "The last elected mayor... Kwame Kilpatrick — better known as the “Player Mayor” for his extravagant lifestyle of bling and parties — sits in prison for felony corruption. But Detroiters are prideful and protective of their own; even when Kilpatrick and his associates were shown to be corrupt, many Detroiters came out to support him, blaming the prosecutors for unfairly targeting a black elected official." A good, transparent government, and a population committed to holding its leaders accountable, are necessary to the success of any city. Detroiters have nobody else to blame but themselves. There are lessons here for cities all over the world, and especially in India, that are riven by poor leadership, nepotism and corruption.

Fiscal mismanagement is a no brainer. The City continued to rack on debt over the past decade, spending more than it earned. Detroit's debt currently amounts to almost $26,000 per resident. The per capita income in the city was approximately $14,000 in 2009, and hasn't risen much since. Detroit is one of the most economically depressed communities in the US, hit hard by the exodus of jobs and people over the past 50 years. One would have to have had their head firmly in the sand, to not understand that when your debts are so far in excess of any ability to repay them, you will inevitably default. Whoever lent the City money, deserved to lose it.

Last but not least, but perhaps one of the most important factors, has been a lack of planning vision. Detroit is ringed by relatively wealthy suburbs. Marilyn Salenger, in an opinion piece in the Washington Post, writes "While the suburbs began to draw people out of our [US] cities in the 1950s, Detroit’s neighborhoods and their demographics changed drastically and quickly after the 1967 [race] riots. White residents fled by the thousands, affecting municipal infrastructures, tax bases and jobs. It set the stage for similar urban race-related exoduses around the country." 82% of the City's residents identified as "black", and 8% as "white" in 2009. Detroit's population has fallen from nearly 2 million in the 1950's, to approximately 715,000 in 2010 as per US Census Bureau records. This population bleed was coupled with continued sprawl, now encompassing almost 140 square miles. According to an analysis by Drawing Detroit, "there were 13,330 people per square mile in Detroit in 1950, and by 2010 that number had decreased to 5,144." (see graph below). Drawing Detroit's website has some compelling maps that illustrate this decline, that are worth looking at too. Growth without density is a recipe for disaster. As population declines per area, it becomes more and more expensive to deliver services such as water and sewage, healthcare, emergency and social services, and policing. These are mandates of government. Politicians across the world are averse to raising taxes to increase revenue to pay for the true cost of sustaining their communities' quality of life. In such a deadlock, something has to give, and in Detroit's case, it did.

Denser cities also generate more economic activity per area, yielding far more benefit in investment terms. In Detroit's case, a declining and poorer population base left the City with few options. Instead of consolidating the City's footprint and drastically restructuring its physical form and service delivery to stay solvent, Mayor Bing, a former NBA all star, and his Council were diddling on the edges with consecutive budgets that failed to address the real, structural and fiscal issues of an inherently unsustainable city. A recent report by Smart Growth America puts numbers to this argument. More compact and intense development saves at least an average of 38 percent (and in many cases, as high as 50%) on upfront costs for new construction of roads, sewers, water lines and other infrastructure. Such development saves municipalities an average of 10 percent on police, ambulance and fire service costs, and generates 10 times more tax revenue than conventional suburban development.

I was shocked by the state of disrepair and neglect when I drove through Detroit last year on a trip to one of its more prosperous neighbours- Ann Arbor. A wrong turn at around 10 PM, had us in a typical Detroit neighbourhood. The streets were pitch dark and potholed. The only light was from the headlights of our car. It seemed like the zombie apocalypse had finally arrived- we couldn't get out of there fast enough. A post in the New Yorker states that "In the first quarter of 2013, approximately 40% of Detroit’s street lights did not work. The City cannot afford to repair or keep the lights on any more... with up to twenty city neighborhoods that were less than fifteen-per-cent occupied."

There are lessons for cities across the world here, especially those growing rapidly in the developing world. Demographics and economics will change- that is a given. While it is easy to approve growth and sprawl in good times, the real test lies in how these neighbourhoods will weather change and the true cost of servicing them over decades, even centuries ahead. Cities that have survived the centuries and evolved successfully, have been dense, organic, and vibrant pockets of urban intensity, and not the sprawl that planners churn out these days.

Detroit is a very real, sad example of how a boom turned into bust in less than a generation. The newfound prudence in the bond markets from investors who have been burned by this default, may perhaps be the real driver of change in getting municipal leaders and planners to think twice on how they spend their limited resources, and make the difficult choices they need to, to plan better in the future.

4,326
Thank you for your comment, we value your opinion and the time you took to write to us!

Tweets by @forbesindia
Prev
Food Security Bill: The many ways of feeding Indians
Next
The MOOC question