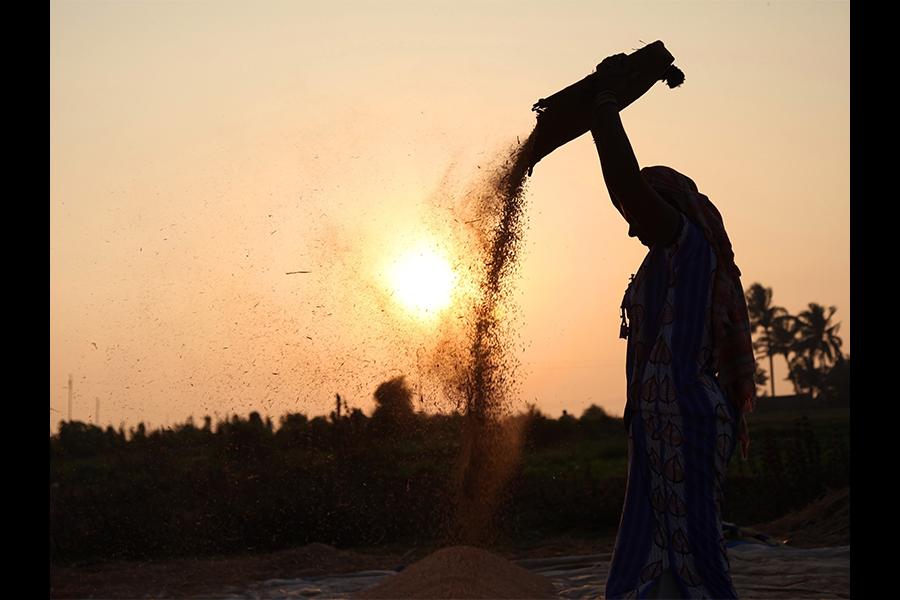 Crop insurance has emerged as the third-largest segment in terms of gross direct premium after motor and health (Image: Shutterstock.com)

Non-life insurance registered a premium growth of 32% in fiscal 2017 – a decadal high - driven by four-fold rise in crop insurance premium. Favourable policy changes in terms of pricing and coverage - courtesy Pradhan Mantri Fasal Bima Yojana - benefited both insurers and farmers and led to a spurt in crop insurance business. That, and healthy growth in motor third-party and health insurance businesses, drove overall premium growth for the non-life insurance industry. 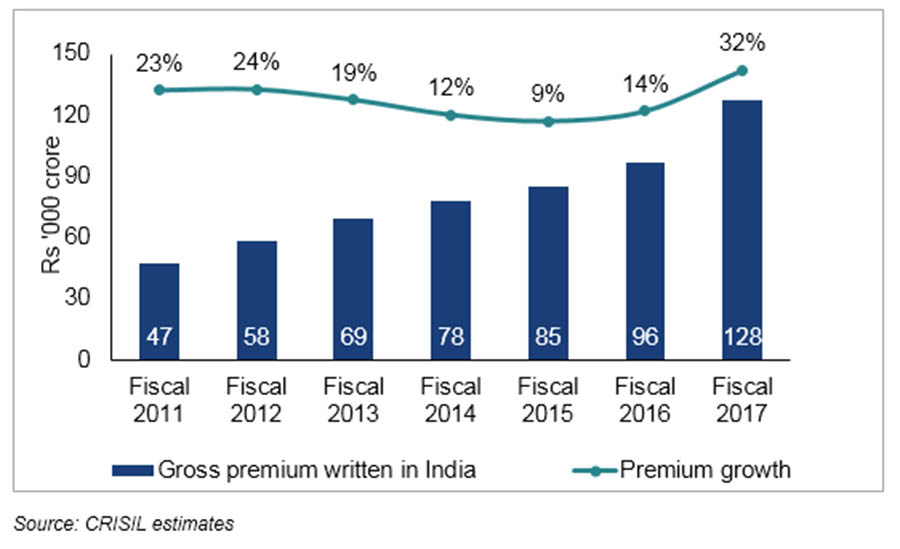 Crop insurance has emerged as the third-largest segment in terms of gross direct premium after motor and health with its contribution to overall gross premium increasing to 16% in fiscal 2017 from just 5.5% in the previous fiscal. 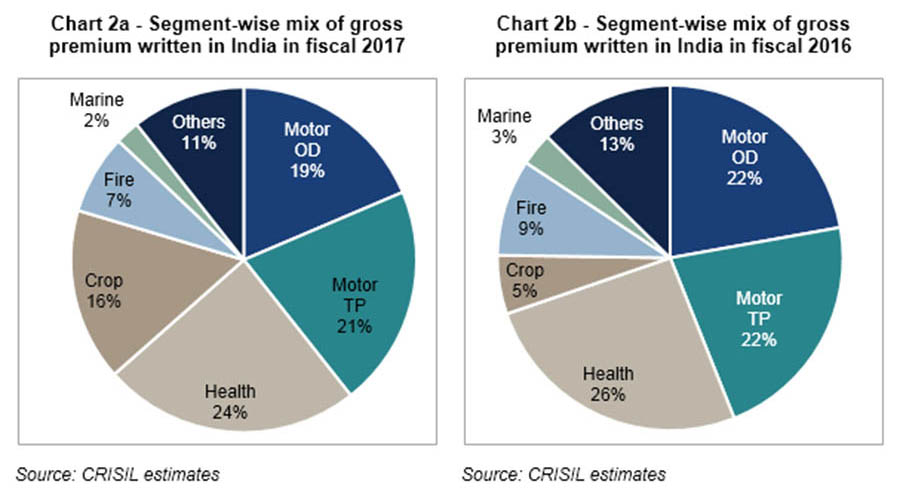 With insurance penetration among small and marginal farmers expected to increase, share of crop insurance will increase even further over the medium term – but at a gradual pace. Therefore, growth rate will moderate this fiscal because of high-base effect of last fiscal coming into play for crop insurance. Nevertheless, growth will remain strong at 18-20% driven by significant upsurge in motor third-party premium, increase in penetration in crop and retail segments, and price correction in the group health segment.

Over the long run, too, prospects remains buoyant as penetration of non-life insurance in India, measured in terms of gross premium as a percentage of gross domestic product, wallows at a low 0.7%. That leaves ample headroom for growth especially in retail and small and medium enterprise segments. The challenge, however, lies in designing new products suited to the needs of the customer.

Regulatory developments are also supportive of increasing the insurance penetration in the country, albeit gradually. Increase in foreign direct investment, allowing insurance companies to raise hybrid capital, permitting large foreign reinsurance companies with strong financial profile to set up branches in India, and permitting Lloyd’s (a global specialist insurance and reinsurance market) to enter into India, are some of the measures undertaken to enhance the capacity to underwrite more business.

Chart 3 - Market share based on gross premium written in India 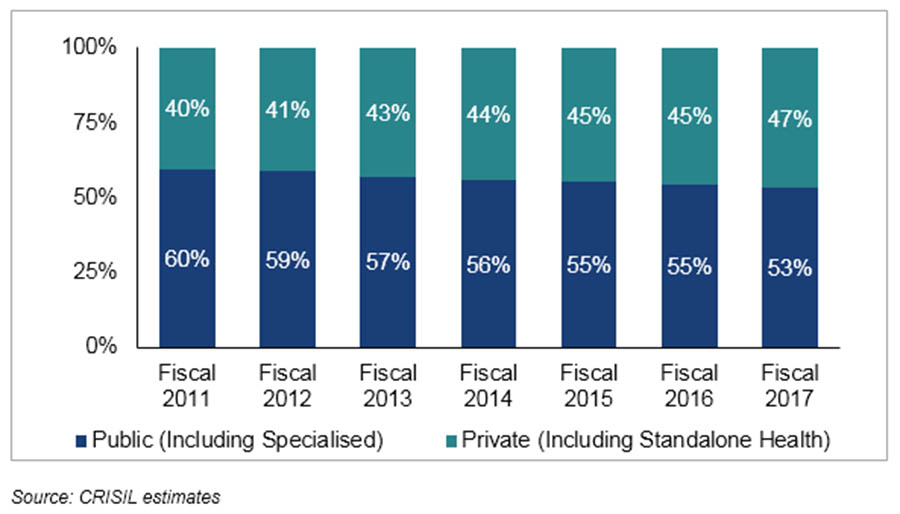 However, underwriting performance remains modest as reflected in high combined ratio*, which stems from continued weakness in the group health and motor third-party segments. Moreover, the combined ratio increased in the past few years because of increase in claims ratio following catastrophic events such as floods in Chennai, Uttarakhand and Jammu & Kashmir, and cyclone in Andhra Pradesh. 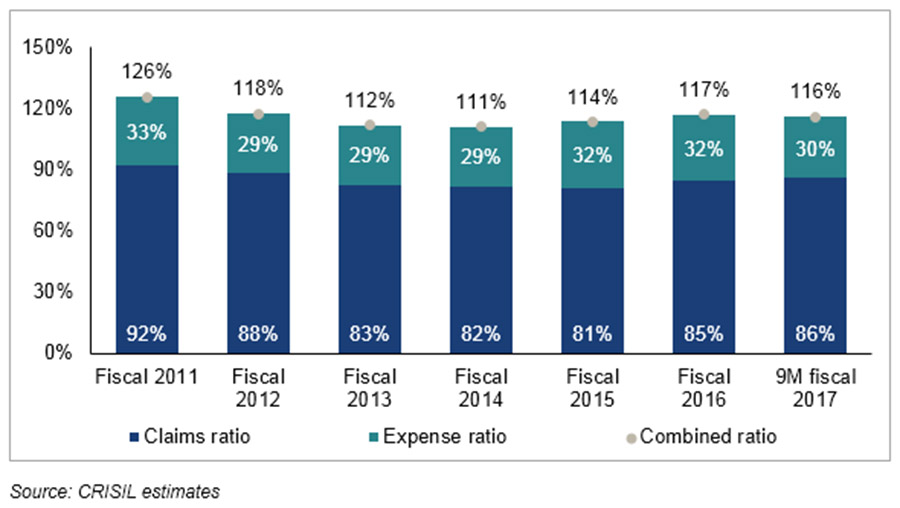 Internal accruals may come up short because of modest underwriting performance. Hence, regular capital infusion will be needed to fund growth and maintain solvency ratio. Capital availability, however, will not be a challenge as a majority of insurers are promoted by large established companies. Growth capital is also expected to be funded through listing and public issue.

Meantime, hybrid capital has also emerged as an attractive alternate option. As many as eight insurance companies have raised hybrid capital aggregating over Rs 2,000 crore thus far. More issuances are on the cards with non-life premium growth expected to be buoyant this fiscal.

While capital will remain adequate for buoyant growth over the medium term, ability to improve underwriting performance by moving towards risk-based pricing is critical for steady internal accruals, long-term scalability and sustainability of the industry.
---
* Combined ratio is an indicator of the underwriting performance of a non-life insurance company. Combined ratio of above 100% indicates that an insurer is not able to make underwriting surplus and has to rely on investment income for profitability.

8,504
Thank you for your comment, we value your opinion and the time you took to write to us!