Of Heights and Hubris- Skyscrapers As Barometers Of Excessive Exuberance 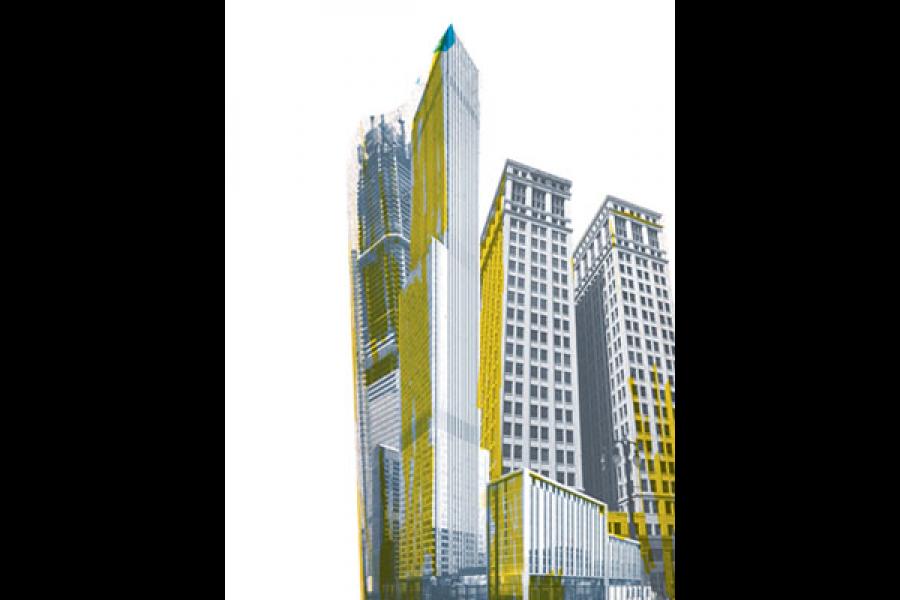 Every place in the world has buildings of significance that its people look to as markers. But none seem as foolish as the race to build the tallest skyscraper (Graphic : Sameer Pawar)

Barclays, the once high-flying, but now much-sobered UK-based bank, tracks a very interesting barometer of our times- the number and intensity of skyscraper buildings globally. Though hardly scientific in its approach, the group, in a report released in 2012, posited that the peak in skyscraper-building activity in a place also coincided with that place’s economic peak, and almost always marked the edge of a cliff of  economic collapse. The bank found it to be a credible proxy for the tipping point of economic exuberance.

This topic was of renewed interest to me as I read about Prime Minister Erdogan of Turkey’s grandiose plans to remake Istanbul in his own, neo-romantic Ottaman image. It involves severing the historic peninsula of the old city of what was once Byzantium and then Constantinople into an island with a new canal. His efforts to remake Taksim Square, a vibrant, bohemian open-space and gathering place in old-Istanbul, into a faux military barrack and shopping mall, are what sparked the wave of public rebellion against his authoritarian rule. I will write more on this when I visit Istanbul in a few weeks.

Cities are often known by their landmarks, and leaders of all stripes have sought to leave their marks on their cities. Mitterand’s highly-visible La Grand Arc in Paris was the centrepiece of his era as the President of France. The Taj Mahal and the Gateway of India, very different in scale, craftsmanship, and time, mark significant moments in India’s history. Every place in the world has buildings of significance that its people look to as markers. But none seem as foolish as the race to build the tallest skyscraper.

The phallus (noun: an image or representation of an erect penis), and things phallic have, in my opinion, driven (pun fully intended) the unwise choices mankind has made through its history. Largely (pun intended again) the decisions of men, these conquests and adventures have resulted in wars, pogroms and ships sinking to the bottom of oceans. Skyscrapers are perhaps the most literal and visible manifestation of this battle of the groins.

The Burj-al-Khalifa in Dubai, will hold the title of the tallest, occupied structure in the world, for the next few years at least. The Petronas Towers in Kuala Lumpur had to give it up when the head of its new competitor measured in above it. These will be dwarfed in time by the next record. Men fighting over size, but to what end? Malaysia’s economy has atrophied since, and Dubai’s economy is in tatters even with its oil riches.

Almost every aspiring global city has plans for a new tower that in its opinion will be the tallest. This is where Barclays’ somewhat summary analysis may hold some lessons, and some truth.

Barclays notes that “the pervasive U.S. economic recession with bank failures that came to be known as the Long Depression coincided with the construction of the Equitable Life Building in 1873. At the time the building was the first skyscraper at a height of 142 feet.” The report also states that the 1972 construction of once-iconic World Trade Center twin towers in New York, and the 1974 construction of the Willis Tower (also called the Sears Tower) in Chicago, coincided with a period of speculation in monetary expansion from foreign lending and a subsequent economic contraction. “It also coincided with the collapse of the Bretton Woods system, a rise in oil prices that caused a global economic crisis, and speculation in stocks, property, ships and aircrafts.”

“The Asian economic crisis, currency devaluation and speculation in stock and property coincided with the completion of the Petronas Towers in 1997. At 1,483 feet, the Petronas Towers were the tallest buildings in the world and heralded a crisis in that region.” Dubai’s sordid adventure with height was one in many chapters of a book still being written.

Interestingly, according to Barclays, of all of the world's skyscrapers under construction, China is home to 53% of he total. India just has over a dozen skyscrapers currently under construction. There are plans for yet another, even taller Imperial Tower in dense Mumbai, even as the city smarts from the opulence of a single skyscraper- Antilia- built at a colossal expense to house the family of Mukesh Ambani, Reliance Industries’ CEO. At some point, these phallic symbols begin to look like bubbles. As infallible as these economies may look now, the cracks in the foundation are beginning to show.

My eight-grade English teacher, Mrs. Isaacs, would often tell us “man is not condemned to repeat history, but to rhyme with it”. As much as we have progressed in science and art, in technology and medicine, we still do foolish things driven by base competitive instincts, and do not learn. The false strength of hubris is what empires have been lost to. The skyscraper may be the sword of our times on which we will fall.

Note from the author: I’ve enjoyed playing with the double entendres and puns in this piece. Do try and pick them out in your comments ;-) Graphic from Barclays Capital illustrating the relationship between the building of iconic skyscrapers and economic events, over time.

7,048
Thank you for your comment, we value your opinion and the time you took to write to us!