Rahul Gandhi’s speech may have moved Congress workers and leaders to tears, but the Jaipur Declaration does not inspire confidence that much would change. It's just old wine in an old bottle. 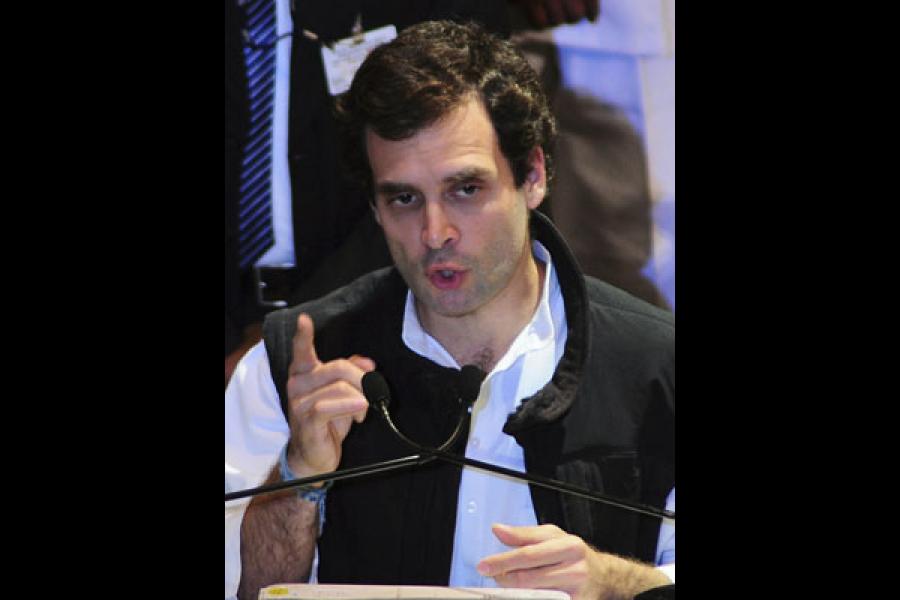 As a conversation opener this morning when I met a senior bureaucrat, I said, ``power is poison’’ is the Congress party’s new maxim. I was, of course, hinting at Rahul Gandhi’s speech on Sunday after becoming the Congress Party’s vice-president. ``So he must now be Rahul `Neelkanth’ Gandhi,’’ the bureaucrat replied wryly, referring to a name of Lord Shiva who drank poison to save the world. Mythology says Shiva’s wife Parvati, grabbed his neck so the poison stuck in his throat turning the neck blue.

As far as the Congress is concerned, Rahul Gandhi is the reluctant messiah who has finally accepted the poisoned chalice for the sake of the party. The Congress believes the young man of 42 would be a magnet for the increasingly restive youth and middle class of the country that has off late begun demanding decisive action, whether it is death for rapists or war against Pakistan.

The Congress Chintan Shivir (brainstorming camp) in Jaipur began with party president Sonia Gandhi's reality-check speech and ended over the weekend with the party anointing the Gandhi scion as the second in command amid scenes of expected sycophancy and family drama. It is now clear that Rahul Gandhi will lead the party’s quest for a third straight term at the Centre; perhaps even as its prime ministerial candidate.

In one of his better articulated speeches in the eight years he has been active in Congress politics, Gandhi said, ``I will not play the role of a lawyer, I will play the role of a judge now.’’ He also pronounced his judgment on what was wrong. ``Power is grossly centralized in our country. We only empower people at the top of a system. We don’t believe in empowering people all the way to bottom… Until we start to respect and empower people, we cannot change anything in this country... all are closed systems, designed for mediocrity, mediocrity dominates,’’ he lamented.

Yet, mediocrity and lack of imagination is clearly reflected in the Jaipur Declaration released at the end of the session. Consider this.
"The Indian National Congress unequivocally re-commits itself to representing India’s ‘middle-ground’, speaking for the vast majority of the people of India, and fighting against fringe elements that foster divisive and destructive ideologies. The Congress is the Party that is committed to science, modern technology, inclusive innovation and job creating growth for the youth of India. The Indian National Congress commits to strengthening its support base – identifying its natural supporters, retaining the support of those sections that are with the Congress, and winning over those sections that have drifted away."

The declaration promises to fulfill past promises and makes some new ones as well.
Congress Party’s biggest problem, apart from the lack of leadership and dis-empowering system identified by Gandhi, is an absolute lack of ideas, social, economic or political. It is unwilling to give credit where it is due and continues to play big brother with its coalition partners. It refuses to accept ideas from the ground, even from states ruled by its own, deferring to advise doled out by who Gandhi calls ``…a handful of people behind closed doors who are not fully accountable to them (the people)’’.

Rahul Gandhi’s speech may have moved Congress workers and leaders to tears, but the Jaipur Declaration does not inspire confidence that much would change. It's just old wine in an old bottle. Arguably, Rahul Gandhi now is the most powerful politician in the country. He must make sure he does not choke on it, as mother advised.

4,145
Thank you for your comment, we value your opinion and the time you took to write to us!

Tweets by @forbes_india
Prev
Delhi, stomp the drunks and stop the rapes
Next
Rajnath Election Marks Start Of Poll Season