Spot fixing you can bet on 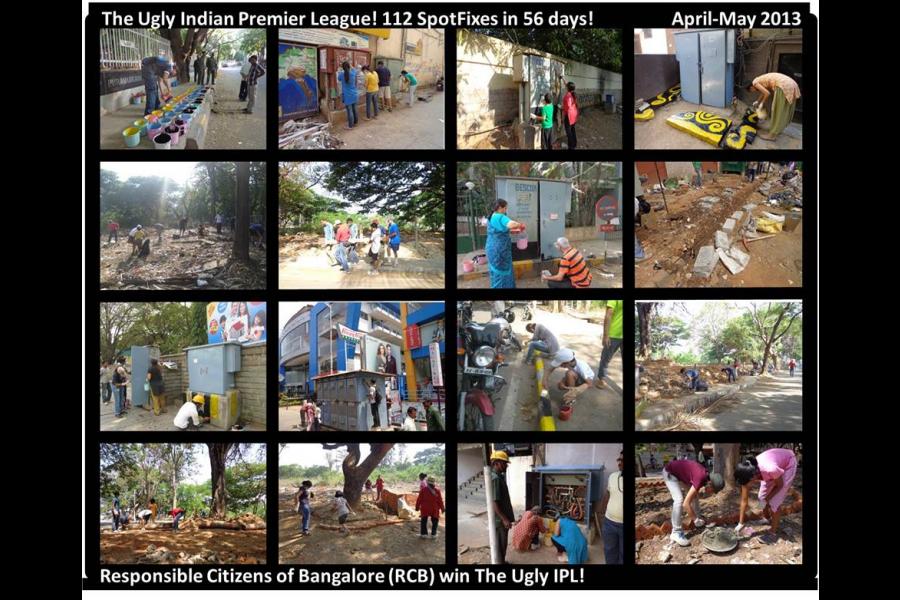 Two days ago, a local group in Bangalore had reason to celebrate. They had 112 spot fixes in 56 days. Hold on now, there’s no need to get angry for this is the kind of spot fixing. Most residents in urban concrete jungles whole heartedly welcome it.

These spot fixes refer to places in the city that needed urgent attention because they were either littered or creating a nuisance for people in the area. Bangalore has had and still continues to have huge issues with garbage, and in one way, these spot fixes clean up common dumping areas.

The spot fixes were carried out by a team of volunteers known as the Responsible Citizens of Bangalore (RCB) to win The Ugly Indian Premier League. All this was organized by a local civic group of active citizens called ‘The Ugly Indian’.

The Ugly Indian (TUI) is a local anonymous group in Bangalore that has been hell bent on staying anonymous. They have been around for almost three years now, and although initially they interacted with the press via email, including this journalist, today they are incommunicado. (I had reached out twice earlier to this to get no response only to read on their Facebook page the following: “There is enough material on this FB page for any journalist to talk about.”)

Indeed, there is. TUI started out more than two years ago in the prominent M.G. Road area of Bangalore. Its equivalent in Mumbai would be Jogger’s Park around Bandra. When they began, the common man would only notice one difference and that was little dustbins that have a pretty blue design on them. Since urban bodies do not keep garbage bins in public spaces, TUI places them

The last time they spoke to me was in 2011 where they were proud to finish their first series of spot fixes, which were 12 at that time. They have their work documented on Facebook as well as Youtube.

They have come a long way since then, and have grown in the number of their supporters. Their Facebook page has 21,600 members, which is a credit to any urban civic group. One point to note is that in January 2013, Krispy Kreme, a popular doughnut chain opened in the city, and has a following slightly higher than TUI. It is a credit to TUI that they have developed this loyal base of volunteers on Facebook, and more importantly that they have developed an ecosystem of conversation based on civic duties. At any point, they have almost 500 people talking about them on Facebook.

I’m careful not to use the word activist to describe them because their website clearly states that one of their guidelines is ‘no activism’. They are clear that they want solutions, and here is how they define them (since they refuse to speak to the media, now):

We feel a 'solution' is a real solution only if:

1. It sustains in the public street for at least 90 days. 2. With no supervision.
3. Is low-cost (ideally free) and easy to implement and replicate
4. Changes the behaviour and attitudes of all concerned
5. Creates minimal change in the daily actions of everyone concerned
(nobody should lose a job, lose a source of income, or get seriously
inconvenienced – because it takes only one Ugly Indian to undo the
good work of a hundred others).

The good thing about the group is that in the over two years they have been operational, they have a ‘Spotfixing-How-To Guide’ to help anyone interested to learn how to clean a public area sustainably.

4,763
Thank you for your comment, we value your opinion and the time you took to write to us!