Turn the Dimmer Down- The High Cost of Urban Light Pollution

Urban light pollution is linked to higher rates of mental illness and cancer. Over 50% of the world's population now live in cities. As this ratio grows, the problem will get worse. When you sleep tonight, reclaim the night from the light.

Last week, New York City Council studied the details of a bill that may "limit internal and external light use in many commercial buildings when empty at night." It joins several other global cities that have moved in the same direction over the last few years. Even Paris, known as the City of Lights, hit the dimmer switch in July 2013 after France passed nationwide legislation that mandates a 1 a.m. curfew on over-illumination.

The reasons for turning down the lights are threefold. Firstly, resulting lower energy usage cuts costs and CO2 emissions. Secondly, night-migrating birds that rely on the moon and stars for navigation, lose their way because of the confusion that light pollution causes them, and many die on these life-sustaining journeys. Thirdly, and perhaps most importantly for you my readers– light pollution has a damning, negative effect on your mental and physical health, with long-term consequences. 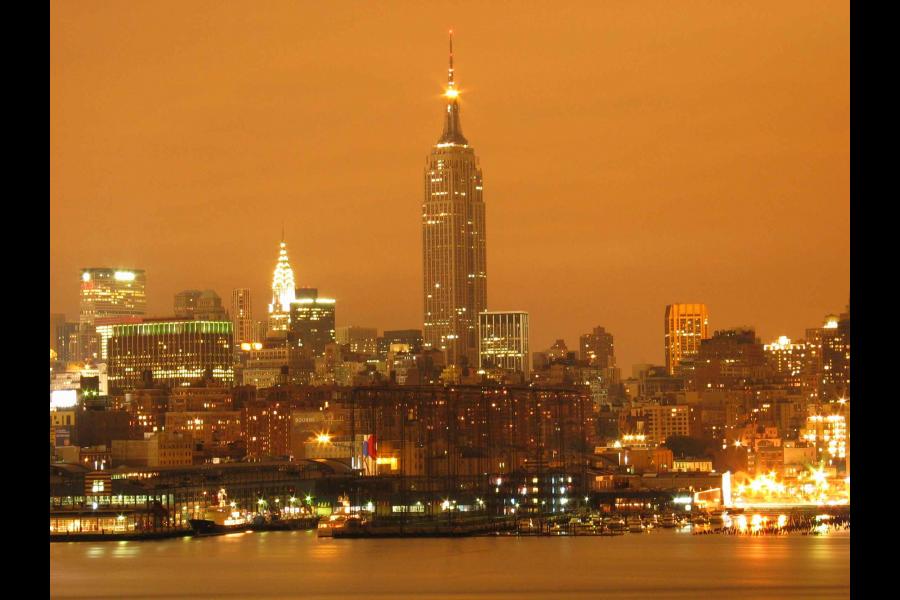 New York City's move is expected to impact 40,000 buildings in the city. That is not insignificant in terms of how much energy can be saved. France's efforts in 2013 were expected to reduce energy use and emissions by "250,000 tonnes of CO2 – enough energy to power 750,000, or 3% of French households, for a year." We're used to turning lights off at home to save on our electricity bills. Why shouldn't our cities do the same?

Skies above cities are estimated to be 100 (Berlin) to 1,000 (Hong Kong) times brighter because of light pollution. While the major culprits are streetlights, lights in office and commercial buildings that are left on at night add to that impact. LED lights, now the norm for new streetlights, use less energy and last longer, but because of the large blue spectrum their light contains, contribute more to light pollution. The image to the left illustrates how strong the impact of light pollution can be. The night sky has for centuries acted as a compass for explorers, and a muse for artists. Those of us who have seen it in its full beauty are staggered by the vastness of the universe we float in. Urban light pollution masks that possibility of wonder.

Coupled with this, we're endangering the survival of the many animals and birds we share this planet with. Light pollution causes migrating birds to mistakenly change course, killing 10,000 of them last year in New York City alone. Turtles that lay their eggs at night have been unable to follow this millennia-old ritual because urban lights trick their senses into thinking it is always daytime. The list is endless. Light pollution disrupts nocturnal animals' sleeping, feeding, and breeding patterns.

And if it harms animals and birds, then it harms us too. The impact of light pollution on human health are under-reported, and severe. The Guardian quotes Steven Lockley, a neuroscientist and an associate professor of medicine at Harvard Medical School; “There’s a cascade of changes to our physiology that are associated with light exposure at night,” Lockley has studied the impacts of light on human health. "Because humans evolved in a 24-hour light/dark cycle known as the circadian clock, any light after dusk is “unnatural”, Lockley says. When we are exposed to light after dusk, “our daytime physiology is triggered and our brains become more alert, our heart rates go up, as does our temperature, and production of the hormone melatonin is suppressed”." In 2007, the World Health Organization's International Agency for Research on Cancer declared circadian disruptions, i.e. shortened and changed sleep patterns, to be carcinogenic. Poor quality and disrupted sleep, that light pollution causes, has been associated with higher rates of mental health problems and cancer in urban populations.

The evidence is out there that light pollution kills, and yet cities like Hong Kong take misplaced pride in amping up their light show. Surprisingly, in 1998, it was in India of all places that the Bombay [Mumbai] High Court ordered all neon lights and signs in the city to be switched off at 11 p.m. India Today reported then that the court order was a result of a petition filed by a resident, citing a study which concluded that sustained direct contact with neon rays could harm human beings. Since then, because of corruption and lax enforcement, Mumbai's night skyline is as polluted as most other cities.

Over 50% of the world's population now live in cities. As this ratio grows, the problem will get even worse. When you sleep tonight, make a difference- turn down the dimmers in your city, and reclaim the night from the light.

11,191
Thank you for your comment, we value your opinion and the time you took to write to us!

Tweets by @forbesindia
Prev
The open truth: Women share bulk of the burden
Next
Gender imbalance and religion: The ugly truth