Companies are more successful with them than without them!

In India, women comprise about 30 percent of corporate senior management positions, which is notably higher than the global average (24 percent). But in the overall workforce, India is one of the worst countries in the world — 113th out of 135 — when it comes to the gender gap. And women entrepreneurs constitute only 10 percent of the total number of entrepreneurs in the country.

One of the most obvious reasons to invest in women leaders in India is that women control the vast majority of household spending. So unless you are a business that is focussed mostly on men, women are more likely to better understand customer perspective. Another is that women are often better at building long-term relationships than men. Lasting relationships benefit a business tremendously, as only so much can be achieved without trust… with employees, customers, suppliers, shareholders, government, etc.

There is also the factor of having diversity in a leadership team. Multiple studies, including Kellogg’s Better Decisions Through Diversity, argue that “socially different group members do more than simply introduce new viewpoints or approaches… diverse groups outperformed more homogeneous groups not because of an influx of new ideas, but because diversity triggered more careful information processing that is absent in homogeneous groups”. In a world of information overload, having better information analysis capacity and doing smarter things with the information you have will provide a competitive edge. 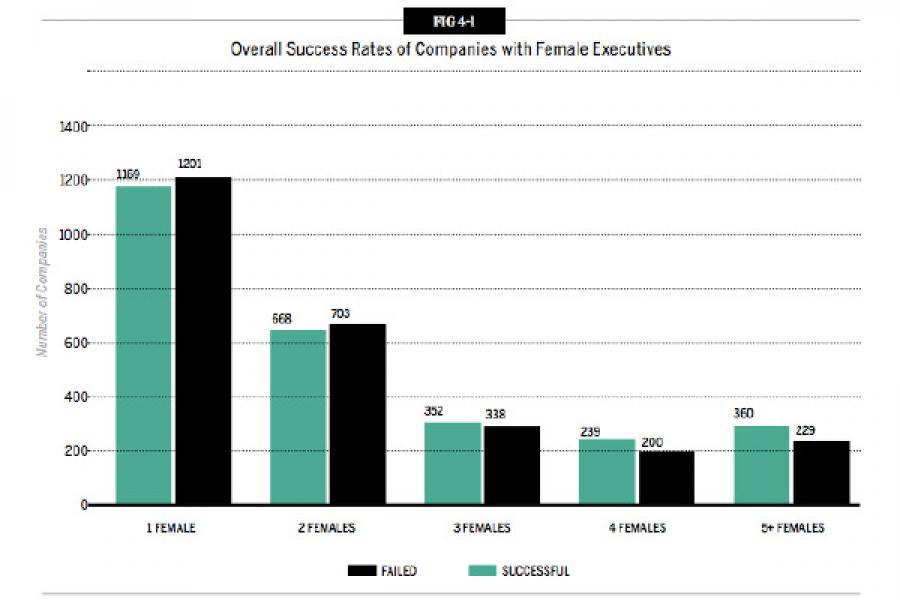 And from an investors’ perspective, it’s clear in this chart that having one or more females as part of the executive team substantially increases your odds of a successful exit (from 2000 onwards): The numbers don’t lie – at least in US-headquartered venture funded and public companies. There’s no reason that women will not provide similar or greater benefits to growing organisations in India.

The challenge will be where to find them. According to the Economic Times, as of 2012, women students at IITs had almost doubled to 11 percent in five years and their numbers at two B-schools - ISB-Hyderabad (29 percent) and IIM-Kozhikode (36 percent) - were inching closer to Harvard Business School (39 percent). Other IIMs are lagging though. IIM-Calcutta has only seven percent women in the class of 2013 and IIM-Ahmedabad only 10.9 percent.

Role models are vital for encouraging more women into technical and business universities as well as to entrepreneurship. Author Rashmi Bansal recently published “Follow Every Rainbow: Inspiring Stories of 25 Women Entrepreneurs whose Gentle Touch Created Strong Businesses.” I’m hopeful that more broadly read stories of successful women will provide encouragement to attract more to the field. We are on the lookout for exceptional women entrepreneurs. And other smart VCs are too.

28,209
Thank you for your comment, we value your opinion and the time you took to write to us!