Behind the scenes: Making of the 2014 Forbes India Celebrity 100 covers

The Forbes India Celebrity 100 is in its third year and we have 5 faces gracing our covers this year. For the first time since we began drawing up the list, Shah Rukh Khan has been unseated from the top slot by his friend and peer Salman Khan, who's on the first cover of the issue. Our 5-cover special also includes (in order of their ranks) Akshay Kumar, Hrithik Roshan, Ranveer Singh and Sania Mirza. 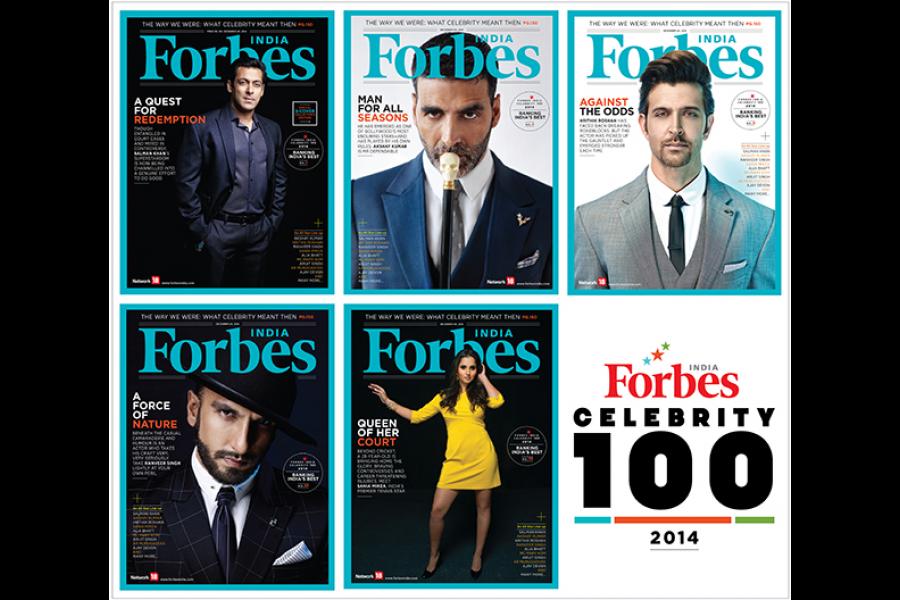 It took us intense planning and strategising to execute the shoots of these 5 A-listers. Like last year, top fashion photographer Colston Julian collaborated with us for four of the cover shoots. Forbes India Photo Editor Vikas Khot shot the Sania Mirza cover. We also roped in celebrity stylist Antara Motiwala to create looks that are exclusive for Forbes India, which is essentially a business magazine. We decided on sharp portraits of the stars. Antara opted for bespoke styling and allowed the subjects to be their natural self.

Salman was at ease and sported a faint smile. Akshay's salt-and-pepper stubble resembled George Clooney's. Hrithik was sharp and intense with perfectly groomed hair. Ranveer was his usual quirky self but sported the look of an undercover agent for the cover shot. And last but not the least, Sania looked classy and confident in her striking yellow outfit.

Forbes has always been known for its portraitures. The look of the who's who matters. And it was no different this time. Here's a video of the making of the Celebrity 100 covers.

The shoots were not only exciting but also fulfilling. There were smiling faces all around. And the very special 5-cover edition, the result of many weeks of tireless work put in by the design and editorial teams at Forbes India, brings you detailed profiles, interviews, snapshots and inforgraphics on the country's biggest stars.

We present you one of our key annual issues  -- the 2014 Forbes India Celebrity 100. And sincerely hope that you enjoy browsing it as much as we did putting it together.

8,778
Thank you for your comment, we value your opinion and the time you took to write to us!

Tweets by @forbesindia
Prev
Are you an achiever under 30? We want to hear from you!
Next
30 Under 30: Call for submissions and nominations