How we chose the face for the cover; and behind-the-scenes footage of the photo shoot

It’s that time of the year again. The Forbes India Celebrity 100 Special is ready to hit stands and here’s a sneak peek of what went into the creation of this flagship issue. 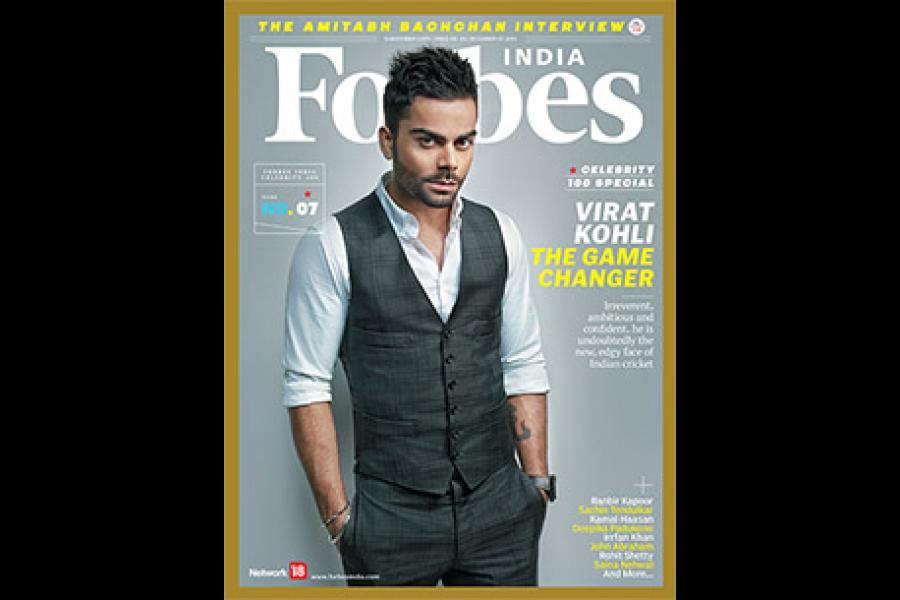 Like last year, when we debuted with the Celeb List, the Forbes India team had to address the big question of who would grace this year’s cover. A lengthy selection and elimination process followed. We glanced at our categories. We checked who stood where. And it boiled down to two choices: Amitabh Bachchan OR Virat Kohli.

Mr. Bachchan, the evergreen legend of Indian cinema, is among the country’s most enduring celebs. This year he reported the highest increase in earnings among the Top 10 celebs on our list. Kohli, on the other hand, is the bold new face of Indian cricket and has already achieved much in his short career. This year he climbed two spots up to No. 7 on the list.

Both interesting choices influenced by the twin religions—Bollywood and cricket—of our country.

Young turk Kohli eventually emerged as ‘the face’ for the cover. His fantastic run in the last one year, his aggressive personality that has made him a marketer’s delight, and his achievements that inspire a generation of youth made him a worthy successor to Shah Rukh Khan on the cover of the Forbes India Celebrity 100 issue.

Leading fashion photographer Colston Julian was roped in for the cover shoot. [His body of work can be viewed at colstonjulian.com.] Colston and I decided on a dynamic portrait of Kohli. We opted for bespoke styling and allowed his body language to do the talking. Kohli brought along his exclusive Tom Ford suit, which he claimed was his “best-fitting suit that needed no alterations” and among his most precious possessions. He teamed it up with an elegant white Gucci shirt that worked well for our cover.

Scroll down for snapshots of the Kohli photo shoot. This Celeb Special edition is packed with profiles, interviews, stories, info graphics and pictures of India’s top celebrities. Our design team worked tirelessly to create multiple templates and layouts to best bring out all the elements. And the result is for you to see. As always, we look forward to your precious feedback.

10,105
Thank you for your comment, we value your opinion and the time you took to write to us!

Tweets by @forbesindia
Prev
Forbes India Celebrity 100 Nominees List for 2013
Next
Are you a successful entrepreneur? Or an exceptional professional? Are you under 30? We want to hear from you.